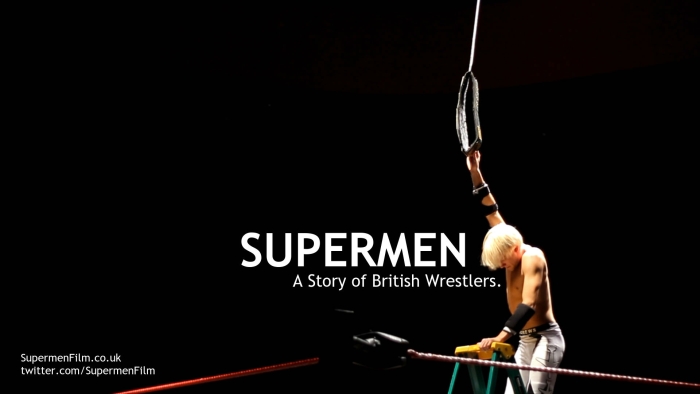 Supermen: A Story of British Wrestlers is a documentary film that explores what a life in British wrestling is like. In the film, wrestlers with ages ranging from 17 to over 60 discuss their involvement in wrestling, and how it has changed and shaped their lives. The film intercuts between wrestlers of differing ages, experience and backgrounds to create a dialogue and give a full picture of the whole experience. The topics covered include injuries, sacrifices, family and relationships, the dream of going to America and more.

The film was shot in 2012 over the course of a year, and was entirely self-funded by the production team. This included filming at numerous British promotions, including Southside Wrestling, New Scene Wrestling and BritWresFest.

Viewers will be able to ‘tip’ money via PayPal, which will help go to covering the costs of production.

The standard edition DVD/BluRay will feature a standard copy of the film.

The Collector’s Edition DVD/BluRay is a double-disc pack that comes with the standard copy of the film and a bonus second disc with additional full interviews of Rockstar Spud and Dave Finlay, plus additional match material. There is, however, potential for these extras to change, depending on viewer feedback.

When I first received the email asking whether Wrestling 101 would be interested in reviewing this documentary on British wrestling, I must honest enough to admit that while I would be happy to review it for the site, I wasn’t expecting to enjoy it.

Now that I’ve admitted that, I must also now state quite clearly that this negative attitude was totally unwarranted. Supermen: A Story of British Wrestlers is a great documentary that has obviously been put together by a group of people who love wrestling, who love British wrestling and wish to treat it with the respect it deserves in relation to the history of the grappling game in the UK and where the veterans of the UK scene would like to see the future of the business on this fair isle.

Taking a talking-heads format interspersed with snippets of match footage is the standard for any documentary of this ilk, but even with the obvious low-budget values (of both this release and the UK wrestling promotions on show) you can tell that this is a professional production. 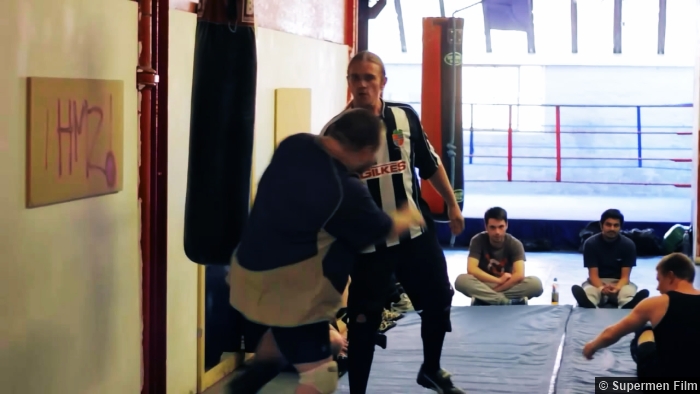 The heads in question range from the guys who have been around seemingly forever (Fit Finlay, Dave Taylor, Robbie Brookside, Danny “Boy” Collins, Ray Robinson and “Tarzan Boy” Darren Ward) to the younger guys on the UK circuit (Joel Redman, Rockstar Spud, Marty Scurll and Jimmy Havoc to name a few) who are beginning to make a name for themselves to varying degrees. It’s actually interesting to note that three of the four young guys in the parenthesis have been featured on WWE or TNA in prominent roles. 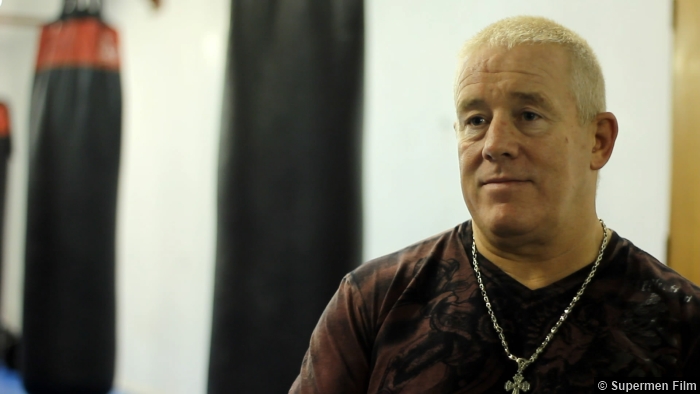 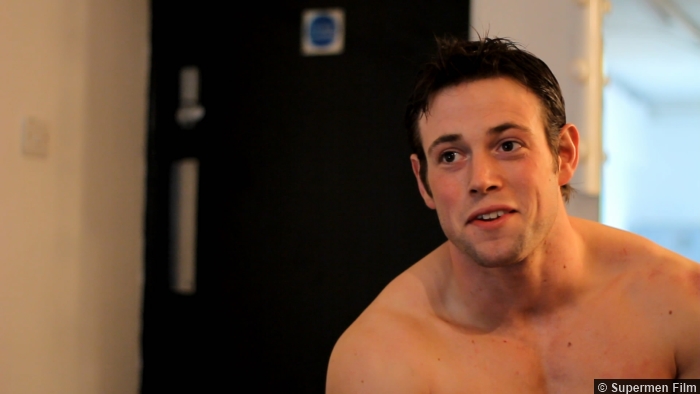 There are some negatives and the most glaring one is that the documentary does not give a clear indication of what its agenda is in relation to British wrestling. In fact, it’s almost like being backstage at a wrestling show where we would just listen or tell various road stories to the guys while we killed time. If there had been a framework to hang these stories on, then the impact could have been greater and the message the film-maker is trying to get across might then have some resonance.

Also, a few of the talking heads and their comments are really off-putting. For example, “English Bulldog” Matt Jarrett comes across like a slightly mentally deficient visual parody of the musician Goldie and is the one true misfire of the documentary. Along the same lines are, Ashcon & Abbas Rezazadeh (who are “promoters”) who come across as disrespectful with no grasp of the history of British wrestling. I mean, they use Matt Morgan as a barometer of fame and aspiration!

Across the rest of the doc, Fit Finlay is great, Dave Taylor comes across as slightly bitter about the modern wrestling scene (but gives valid reasons as to why), Robbie Brookside wants it to be 1989 and Alex Shane talking about “literally” having the people in the palm of his hand creates all kinds of disturbing images. 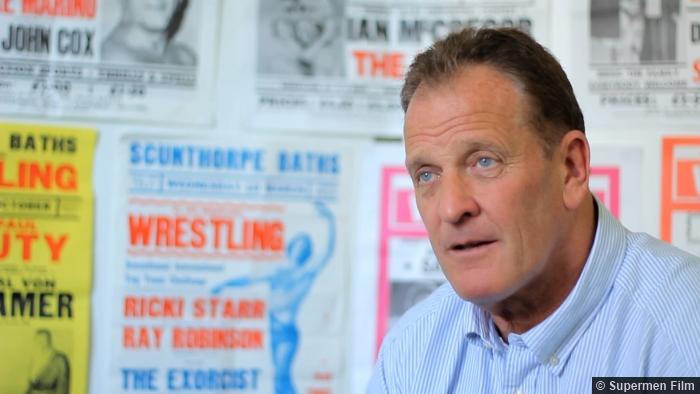 Rockstar Spud carries himself like a true gentlemen each time he is on the screen and talks a lot of sense about wrestling (both UK and overseas), although his comments about how he needs to go to WWE before he can claim to “know anything” about wrestling is interesting due to where he currently plies his trade. That being said, the respect he has for Robbie Brookside is amazing… and, of course, well deserved. 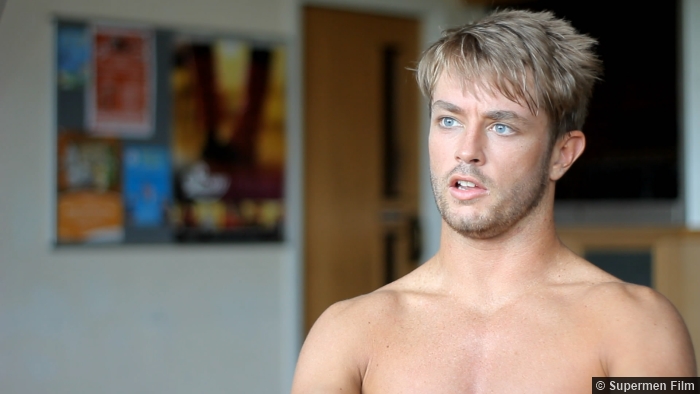 From the match footage, you get little bits here and there, but not enough to really judge anyone on (outside of a look at Robbie Brookside’s training school). One of the more prominent bouts featured is Jimmy Havoc (who is actually a really nice guy) v “Loco” Mike Mason. They worked a “deathmatch” and doing what they did in front of such a small crowd (barbed-wire, light-tubes, tables, chairs, tacks, glass and thumbtacks) just seems nonsensical in the grand scheme of things.

This is a very well put together documentary that is, despite having no clear agenda, a thoroughly enjoyable watch from beginning to end. The negative talking-heads are on screen very little and the stories from the older generation are genuinely interesting.

At under 1hr in length, it never overstays its welcome and when the curtain closes I was left wanting to listen to Fit Finlay, Robbie Brookside, Dave Taylor and Ray Robinson for as long as they wanted to tell stories.

I’d also recommend donating to the cause and obtaining at least a DVD copy if for no other reason than to give Hassan Otsmane-Elhaou and crew an incentive to produce a follow-up piece.