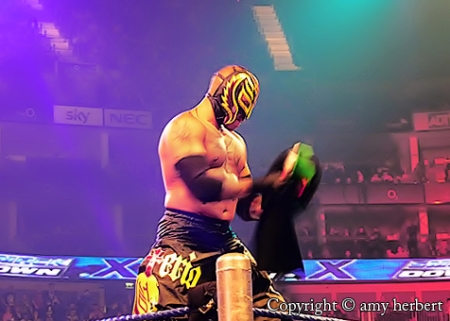 Six nights before Survivor Series, the 1069th edition of WWE Monday Night RAW came to you, live, from the Bridgestone Arena in Nashville, TN. On a very special night on RAW, the Monday Night franchise would embrace the spirit of “Music City” as RAW would be made over with a country music-theme for one night only! After taking last week off for their own personal vacation, The Authority would return to RAW as WWE COO Triple H & WWE Principal Owner Stephanie McMahon would look to sort out the chaos and destruction that dominated last week’s RAW.

One such incident saw “The World’s Largest Athlete” and the #1 Contender for the WWE Title, Big Show, attack WWE Champion Randy Orton, putting the self-proclaimed “face of the WWE” through the announce table! Not only that, but Randy Orton was shown no respect by Director of Operations Kane, RAW General Manager Brad Maddox, or SmackDown General Manager Vickie Guerrero. What will The Authority have to say in regards to Big Show’s attack? Will Randy Orton confront Triple H & Stephanie McMahon about Kane, Maddox, & Vickie’s behavior last week?

Returning from their vacation last week, RAW Country kicks off with The Authority, WWE COO Triple H & WWE Principal Owner Stephanie McMahon. Triple H says that they were “disappointed” with the “chaos” that dominated last week’s RAW and that the parties responsible for the chaos, such as Brad Maddox and Vickie Guerrero, will be “dealt with” tonight. The Authority is then interrupted by an angry WWE Champion as the “face of the WWE”, Randy Orton, storms to the ring, saying that he blames them for the chaos. Orton then says that he holds them “directly responsible” for Big Show putting him through the announce table last week, saying that The Authority should be “protecting” their “most valuable asset”. The WWE Champion continues, saying that he is still “jacked up” from last week, asking what they are going to do about it if he cannot defeat Big Show on his own come Survivor Series! Triple H then gets in the face of the WWE Champion, asking who Orton thinks he is. Orton says that he is the “face of the WWE”, but the COO corrects him, saying that Orton is the face of his and Stephanie’s company.

RAW General Manager Brad Maddox and SmackDown General Manager Vickie Guerrero then choose this moment to interrupt The Authority as Maddox immediately throws Vickie under the bus, saying the chaos last week was “all Vickie’s fault”! Triple H says that it doesn’t matter who’s fault it is, they all have to “pay” here tonight. Stephanie says that Maddox & Vickie have become “desensitized” to what the Superstars and Divas have to go through on a weekly basis. With that, Stephanie announces that Vickie will return to the ring to face Divas Champion AJ Lee later tonight. As for Brad Maddox, he will face WWE Champion Randy Orton in a no disqualification match right now! Maddox tries to make an escape, but The Authority’s Director of Operations, Kane, emerges, standing between Maddox and the GM’s escape.

As punishment for the chaos that dominated last week’s RAW, the opening match of the night would see RAW General Manager Brad Maddox being forced into a no disqualification match against WWE Champion Randy Orton. After initially trying to talk Randy Orton down from the match, Brad Maddox would surprise the WWE Champion, popping Orton in the skull with a microphone! The GM would manage to shove Orton into the steel ring post before planting Orton with a DDT in the ring, but would only score a near-fall over the champion! However, this brief flurry would only serve to anger the WWE Champion as Orton would drop the GM with a suspended DDT on the outside before rolling Maddox into the ring, grabbing a microphone, and repeatedly smashing the microphone into the skull of Brad Maddox. With Maddox clearly unable to continue, the referee stops the match, giving the win to Randy Orton.

In a special attraction for RAW Country, twelve Divas would line up in the ring as Hall of Famer Jerry “The King” Lawler would host a game of Divas Musical Chairs. Natalya, Summer Rae, Eva Marie, Cameron, Naomi, Kaitlyn, Alicia Fox, Aksana, Rosa Mendes, Jo-Jo, & The Bella Twins would take part in the competition, but the entire game would break down into a massive Divas brawl.

Six nights before he challenges Randy Orton for the WWE Championship at Survivor Series, “The World’s Largest Athlete” was in action on RAW Country as Big Show went one-on-one with Ryback. In a collision of two powerhouses, Big Show would survive an incredible Shell Shocked from Ryback, knocking Ryback out with the Knockout Punch en route to picking up the win. After the match, Randy Orton would slide into the ring to try and pick the bones of the #1 Contender, but Big Show was prepared for the WWE Champion, blasting the “face of the WWE” with the Spear!

Backstage, an increasingly unhinged Randy Orton demands ice for his injured ribs, screaming at the trainer, “where was The Shield?” The WWE Champion then mutters to himself that, apparently, he is on his own.

Before they challenge Goldust & Cody Rhodes for the WWE Tag Team Championship on SmackDown, The Real Americans, with Zeb Colter in their corner, would face the team of The Miz & Kofi Kingston on RAW Country. During the match, The Miz would surprise everyone by betraying his tag team partner, refusing to tag into the match, which results in Jack Swagger forcing Kofi Kingston to tap out to the Patriot Lock to pick up the win for The Real Americans.

Moments before she is scheduled to face Divas Champion AJ Lee, SmackDown General Manager Vickie Guerrero tries to feign injury, screaming for an EMT before “playing dead” in the hallway! EMT’s would strap Vickie into a stretcher and WWE Principal Owner Stephanie McMahon would demand that Vickie be taken to the hospital, but only after she is taken to the ring for her match! The EMT’s roll Vickie Guerrero straight out to the ring, still strapped in to the stretcher!

As punishment for the chaos on last week’s RAW, SmackDown General Manager Vickie Guerrero would be forced to compete against Divas Champion AJ Lee on RAW Country. As the Divas Champion waits patiently, Vickie Guerrero fakes fainting and takes time to drink some water before the match officially begins. Vickie would immediately scramble to ringside and, after slipping past Tamina Snuka, Vickie would not be able to escape AJ Lee as the Divas Champion would roll Vickie into the ring, locking the Black Widow in on the SmackDown General Manager, immediately making Vickie tap out. After the match, Vickie would again faint at ringside.

In the never-before-seen Broadway Brawl, several instruments would be set up in the ring for a unique brawl between Dolph Ziggler and Damien Sandow. After swinging and missing with an electric guitar on the outside of the ring, Damien Sandow would use the guitar stand on the mid-section of Dolph Ziggler. Moments later, Sandow would pull Ziggler off of the top rope, sending Dolph crashing on top of a keyboard as keys fly everywhere from the impact. Despite being punished with nearly every musical instrument available throughout the match, it was Dolph Ziggler making some music in Music City as Dolph would smash a snare drum, a bass drum, and an acoustic guitar over the skull of Damien Sandow en route to pinning Sandow for the unique win.

Backstage, WWE Champion Randy Orton barges into the office of The Authority, demanding to know if they believe in him as the “face of the WWE” and Stephanie tells Orton that they will have to think about it!

Now calling themselves The Rhinestone Cowboys, 3MB would make an appearance on RAW Country as Jinder Mahal & Drew McIntyre, with Heath Slater in their corner, would face R-Truth and his new tag team partner straight from NXT, Xavier Woods! In the end, it was Xavier Woods hitting the Lost in the Woods on Drew McIntyre en route to picking up the win for himself and R-Truth.

Backstage, The Authority confronts WWE Champion Randy Orton, saying that they do have confidence in Randy Orton as the “face of the WWE” and they have so much confidence in Orton that, this Sunday at Survivor Series, there will be no help from The Shield or anyone else! Despite being visibly unhappy with the ruling, Orton says that he will show Triple H “confidence”.

Then it was time for the huge main event as the team of CM Punk, Daniel Bryan, The Usos, and WWE Tag Team Champions Goldust & Cody Rhodes would face the team of The Shield and The Wyatt Family in 12-Man Tag action! At the end of a hellacious and electrifying match, it was CM Punk finally putting The Shield’s Dean Ambrose out with the GTS en route to picking up the win for his super team. After the match, The Real Americans would rush out and, together with The Wyatt Family, the group of five would beat down CM Punk & Daniel Bryan, but a surprise return would save Punk & Bryan as the one and only Rey Mysterio would make the save! Rey would take Antonio Cesaro out before setting Jack Swagger and Luke Harper up, delivering a double 619 to Swagger & Harper! Punk then follows this up with the GTS to Harper, with Bryan adding the running knee for good measure! Rey then celebrates in the ring with CM Punk, Daniel Bryan, Goldust, Cody Rhodes, & The Usos!