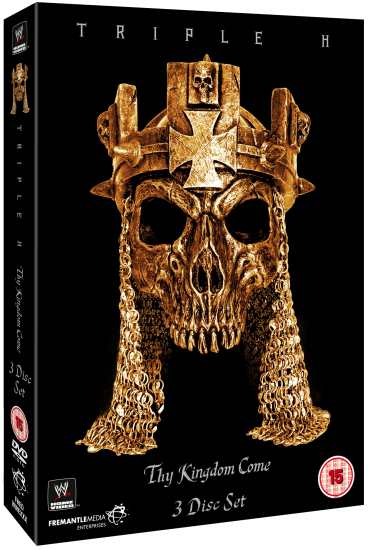 What you have in your hand is the definitive look at Paul Levesque, the man behind the Triple H persona. Sure, a lot of the better / more important matches of his career are on previous HHH releases or indeed other WWE sets. However, WWE have done a great job of avoiding repeats of matches on non-PPV / non-Gimmick Match releases and this is to be commended.

For example, both of the great Mick Foley matches from early 2000 are omitted, but they are featured on so many other collections, it’s doubtful you wouldn’t already have them in your possession already.

Due to that, some of the more overlooked bouts from his career are featured instead, but the main meat of this story is the documentary and for your money you get a two-hour look at the man from his days of watching wrestling through to  going to train with Killer Kowalski and then on to WWE via a short stint in WCW.

This, plus the twelve full matches chronicle a career that surely exceeded his wildest expectations and now finds him firmly a part of the most powerful wrestling family of all time, respected by his peers, looked up to by his new recruits and with a buzz-cut and power suit in his role as the Executive Vice President of Talent and Live Events.

Triple H is a very divisive character and his run of 2003 is rightly regarded as the worst example of his ego running wild in an attempt to keep his position at the top of the mountain. However, there is much more to Hunter Hearst Helmsley than this bleak 12mth run, including his almost perfect heel run from November 1999 through the entirety of 2000, his stellar work in 2002, his original runs with DX and his great work in 2008 with (among others) Jeff Hardy.

Of course, this set also looks at the man behind the gimmick(s) and the two-hour documentary is absolutely fantastic. Talking heads are all relevant and take in his family (mother, father, wife, father-in-law, mother-in-law) and his peers (HBK, Undertaker – out of character, Vince, X-Pac, Billy Gunn, Kevin Nash, Scott Hall, Road Dogg, The Rock, etc).

The tales from his very early days are great and the story of how he came to be known as Terra Ryzing is hilariously old-school. It’s also interesting to hear guys rag on the original Hunter Hearst Helmsley character, with Undertaker in particular saying with great disdain that the gimmick was horrible and it’s a testament to the man that he made it work.

Most of the wrestling content (especially the WWE sections) will be familiar to the majority of long-time fans, so it’s the outside-the-ring element that will be the selling point… and the first disc does not disappoint.

The story of how Trips and Steph began dating and the obstacles put in their way, first by Vince, but then by other wrestlers, is rather revealing. It’s also not a surprise who was the voice of reason in telling Triple H to just go for it as Undertaker was (and is) so secure about his spot, he didn’t have to worry. Footage from the actual wedding is shown (which I believe is a first) and Stephanie looked stunning.

Also of great interest is the evolution (no pun intended) of Triple H from when he stepped into WWE to now. A feat even more amazing when you consider he hasn’t actually changed his name from that first day and there didn’t appear to be any great leap in characterisation as you watched him from 1995 until now.

Chronicled here is the wonderful story of how Chyna became involved, how (and why) DX were created, why it was time to go it alone as The Game (which was not, as you can imagine, greeted with happy-happy-joy-joy from the rest of DX) and his eventual run as WWE Champion.

Of course, the quad tears are mentioned, but the never-before-seen sections with Dr. James Andrews are eye-openers and genuinely caused me to respect HHH even more. When you see Sin Cara ask for a match to be stopped when he dislocates a finger and then watch this DVD you remember Triple H tore his quad from the bone and had it roll up his leg, yet he continues the match (by standing up, taking a few shots and then allows Jericho to apply the Walls of Jericho – a move that, don’t forget, will put some actual pressure on the thighs), you realise how legitimately tough this guy is.

Evolution is also explained and it’s a little heartbreaking to hear from both Flair and Triple H about how the idea from the group first sprung to mind. That being said, once it got rolling, Evolution was a great success and both Batista and Randy Orton reap the benefits to this day.

The documentary closes with a brief look at Triple H’s acting career (and an explanation from the man himself on why he didn’t want to make films), segways into Undertaker bigging up HHH and then a quick run of talking-heads telling us why Triple H is so great.

It’s this very last section that lets the side down as it comes across as just too sycophantic and sugar-coated, especially in comparison to the more genuine sections that preceded it.

The matches are mostly great, with the standouts being the Iron Man Match, the tag-bout against Undertaker & Kane with Steve Austin (one of my favourite tag-team matches with guys who weren’t an actual tag-team) and the bout against Jeff Hardy.

All in all, this is a fantastic documentary and the matches are mostly bouts that haven’t been featured on previous releases, so the value for money is there. It’s only the last 5mins of the doc that stops loses review points.