Ever since Shawn Michaels and Razor Ramon had their stellar outing at WrestleMania X (and repeated the feat in their superior Summerslam ’95 outing), the Ladder Match has had a certain mystique as it evolved from a simple concept through TLC to the Money in the Bank match that stole the show at numerous WrestleManias to the point it was given its own PPV.

Many men have competed in Ladder Matches, with some even becoming synonymous with the gimmick, but the one thing they’ve all had in common is that they paid the physical price for their efforts and gave us fans a continued run of violent innovation.

To celebrate this most entertaining of stipulations, WWE bring you the second DVD set devoted to all things rung-related inside the squared-circle. Taking in bouts from Smokey Mountain Wrestling, OVW, WCW and, of course, WWE, it’s time to see who climbs to the top and who is left to Crash & Burn. 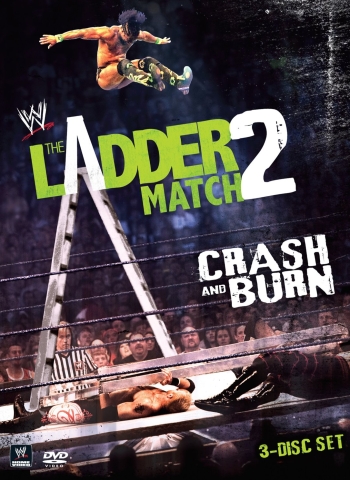 Even though the Ladder Match existed before the WWE brought it to the masses at WrestleMania X, (it is generally agreed it was a Stampede Wrestling creation that Vince imported from Canada at the behest of Bret Hart), it’s not a stretch to say that it was the classic encounter between Shawn Michaels and Razor Ramon that was most fans first experience of the gimmick… and what an experience it was.

With that in mind, it’s only fitting that the set begins with that offering and runs, chronologically, through a series of matches where various objects (titles, contracts, gold discs, money, etc) are hung high above the ring and the only way to win is to climb a ladder and grab said prize (with later matches stating you had to drop to the floor to be considered the winner).

It’s a credit to WWE (and the wrestlers involved) that there is a lack of obvious repetition as the set progresses. Of course there’s certain spots that are considered staples of the Ladder Match, but watching these bouts one after the other, you can see the evolution involved in what we see today.

There are twenty-one complete matches across the three discs, with the amount of competitors varying depending on the stipulation. There are singles bouts, tag-team matches, a six-man tag, a two-on-one handicap match, a three-way match and three eight-man Money in the Bank matches to enjoy.

None of the matches are poor, but, as you’d expect, some aren’t as essential viewing as others. The “you must not miss” matches are Shawn v Razor, 3-Count v Jung Dragons, Eddie v Syxx, E&C v The Hardys, Van Dam v Jeff Hardy, Team Angle v Eddie/Tajiri, the three MitB bouts, Jericho v HBK and Morrison v Sheamus.

In addition, any match that gets Tracy f’n Smothers into a WWE DVD release can only be a good thing and the womens match from OVW shows just exactly what a missed opportunity Katie Lea Burchill was in WWE and is now in TNA.

This is absolutely brilliant and is well worth a spot in your collection, not to mention a stunning follow-up to the first Ladder Match set.

A few things do annoy, particularly the commentary by Eric Bischoff and Ted DiBiase in the Guerrero/Syxx match an the fact The Dudleys aren’t in any match despite Christian (who does a nice job in his links) mentioning them almost immediately.

Ignoring that though, the matches themselves are never less than very good and some of the stunts these guys perform are amazingly insane, especially during the TLC and MitB outings (say what you will about Hornswoggle, but the Green Bay Plunge he took from the top of  a ladder was just insane). I still have my jaw drop at Jeff Hardy putting Edge through a ladder with a seated senton at WrestleMania 23. An eclectic mix of talent mean that you aren’t seeing the same faces all the time, although when those who do repeat (Eddie, HBK, Edge, Jeff Hardy) put forth the efforts that they do, you’re actually glad to see them again.

Other little joys include going back in time and feeling nostalgic for when an arena would come unglued like they just don’t do today. Austin hitting a Stunner on The Rock during the build to WrestleMania XV, the WWE Hardcore Title genuinely meaning something (Bossman was great during this era and his music is simply awesome), seeing The J.O.B. Squad back on my TV, HBK’s heel persona on commentary during the Bossman/Mankind match and when the WWE Tag Team Titles were a main part of the company and the E&C/Hardys/Dudleys three-way feud just lit the promotion on fire.

There’s also some great lines on commentary; the pick of the bunch being at the conclusion of Smothers v Candido where the announcer states a manager is bringing an outsider in to take care of Smothers. He says, with no hint of irony, that it could be “a boxer, a karate guy or a baseball player.” I laughed hard at that one, even more so than when he became worried someone was going to lose a limb. Also, Tank Abbott dancing to 3-Count, with his rep as a legit tough guy, is just surreal.

Nick Patrick’s reaction to Eddie Guerrero defeating Syxx (who was called “The One-Man Rock Concert – take that, Heath Slater) at the nWo PPV is something special, but you find yourself rolling your eyes at WCW over-complicating a simple gimmick during the six-man tag. In addition, the bout between Sheamus and John Morrison is the sleeper match of the entire set. Brutal hits from both men, innovative use of the stipulation and a stunningly stiff finish to things all add up to the perfect end to their rivalry.

If you buy the Blu-Ray version, you get the following additional matches -: