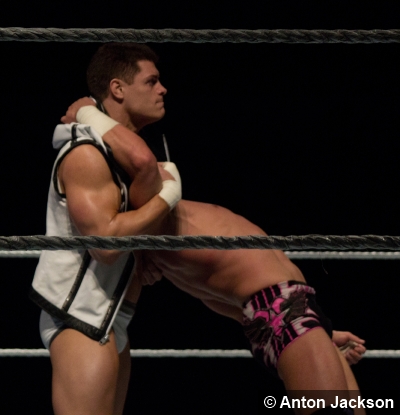 The inaugural edition of WWE Battleground will come to you, live on pay-per-view, this Sunday night (October 6) from the First Niagara Center in Buffalo, NY. As announced on RAW, Goldust & Cody Rhodes will face Seth Rollins & Roman Reigns, AJ Lee will defend the Divas Title, and Dolph Ziggler will be in action on the Battleground Kickoff Pre-Show. Also, WWE.com announced that Curtis Axel will be defending the Intercontinental Title at the event, as well. Here is the updated card:

In the Hardcore Match for the World Heavyweight Title, there will be no disqualifications and no count-outs and the match can only end via pinfall or submission.

What do you think of the current card for Battleground? Post your comments in the box below.