WWE – Cross Rhodes: Out of the Darkness Book Review

Cross Rhodes, out of the Darkness; is the book from everyone’s favourite gold painted Superstar; Goldust aka Dustin Rhodes.  Since he has been on the wrestling scene Rhodes has bounced back and forth between WCW, WWF/WWE and even a stint in TNA. Goldust as a character was one of the most risqué Superstars of the early 90’s. This is one of those times that you can’t help but hope he would have dozens of stories to tell and would inevitably release a fascinating book. 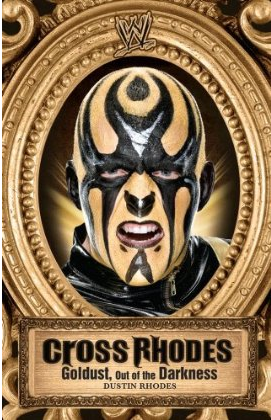 Well it isn’t. It’s just not the book I had expected, I thought after the Rey Mysterio shambles that they released in 2009 I would be immune to disappointment. Let me clarify, the story that Dustin Rhodes writes about isn’t dreadful but it’s not a wrestling autobiography. The wrestling aspect just plays second fiddle to the overarching story of Dustin’s relationship with his father, The American Dream Dusty Rhodes. You get the feeling WWE only agreed to release this was because of how good he makes them look in the book.

So let’s try to judge the book as both a wrestling autobiography and an inspirational story. As a wrestling autobiography it’s fairly deficient and you can’t help but think that he only added the wrestling stories so that the average fan would hold their attention long enough to buy it. The only really interesting stories are how he deals with wrestling in a full body suit and his struggles with playing a heel character. Basically the best parts are the stories of Goldust. There are some interesting titbits about how he was pretty much drugged senseless on cocaine during his TNA run, but even that isn’t so much part of his wrestling narrative as much as it is the inspirational story.

The inspirational story is where the book shines, even if that is for just a brief minute. Goldust has a habit of showing a very idealized and biased picture of his father, which I can’t really hold against him considering that it’s his father. This is where the sole unique selling point of the book comes through, Dustin’s relationship with his father. What is it like to grow up as the son of one of the most famous wrestlers of all time? Better yet what is it like to become a professional wrestler and follow in the footsteps of your famous father? Dustin covers this and it’s heart warming to read about how he mended his relationship with his father and crawled out of the darkness. It’s noteworthy from a wrestling perspective because he’s the first second generation wrestler to talk about the struggles of living in the shadows of their father that I know of.

There are a few more problems. One is that it’s ridiculously short; I finished it in a couple of hours. It has to be the shortest wrestling autobiography I’ve ever read, which is frustrating considering it should cover a 20 year career. However by keeping it short he does not do what Vince Russo insists on doing in his books by hitting you with the same point over and over again. You also get the feeling that Dustin isn’t always telling you everything you could be hearing about events. Combined with his brief inclusion of the wrestling content you get the feeling that you’ve barely been told anything. This isn’t helped by the fact the book is padded out with black pages, a large spaced out type face and a bunch of images which makes the book seem longer than it actually is.

So where does this stand? Well as a wrestling autobiography it’s a bust and if you’re looking for one then you won’t find it here. If you want an inspirational story then this is the book for you. Goldust has my support to write another autobiography with more focus on his in-ring career because the moments where he did pull back the curtain of the wrestling industry were rather appealing.  Until then all we have is this; if you have some time to kill go ahead and look through it but don’t expect a classic.