Well, the road to Wrestlemania is getting shorter by the day, and the last big stop before we get there is the Elimination Chamber, live this Sunday from the New Orleans Arena. Here’s my picks of what to expect from the Chamber on Sunday night. 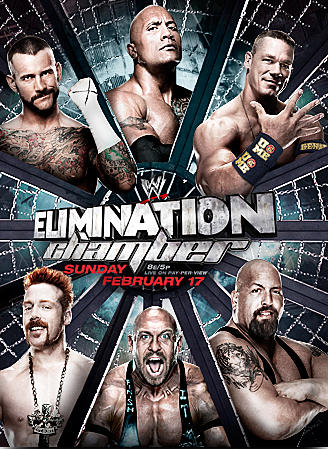 If The Rock is disqualified or counted out, he will lose the championship

You’ve got to love the work of CM Punk. The much talked about 434 day reign as WWE Champion saw him deliver consistently on the mic and in the ring. (Let’s overlook that little Dario Teyes incident where Punk lashed out at a fan in the crowd during a live Raw broadcast…). He’s even managed to be a talking point in the story of a liquor store owner who was shot in the eye, but felt that Punk losing to the Rock was the worst thing that happened to the plucky septuagenarian that same week. He’s put a shine on the WWE title that was badly needed, in an era when the strap was changing hands on a ridiculously quick basis. Just look at the stats: in the same 434 day period of time prior to Punk’s record-breaking run starting, the WWE title switched hands no less than nine times, was carried by Randy Orton, The Miz, Cena, Rey Mysterio, Alberto Del Rio and of course, Punk himself. It was also during this time that Punk “left” the WWE with the title, saw Mysterio be crowned champ, lose that strap to Cena, and then see both titles unified by Punk at the 2011 Summerslam. Phew.

There’s no doubt that Punk and Rock will put on a great show, which I’d be very surprised if the WWE doesn’t use to close the night, but it’s what the WWE is doing after the Elimination Chamber that almost matters more. Yes, there’s an argument that John Cena Vs The Rock at Wrestlemania is a strong enough headliner to not need the title to be up for grabs, but they do have to do something to make Rock Cena II different from last year’s “Once In A Lifetime” match – the most obvious answer being to make it for the title, and see Cena go over Rock. I don’t expect the Rock’s eighth world championship reign to end just yet. At Wrestlemania? Absolutely. But not yet.

Yes, there’s the Ziggler factor and the uncashed Money in the Bank stipulation (more on that later), but I don’t see that having any impact on this headliner.

Take one angry giant and a heel / face / heel again / face again Del Rio, and you’ve got a recipe for another strong World Heavyweight Championship match. It’s a little curious (but not unwelcome) that the WWE is seemingly sticking to longer-running feuds that cross several PPVs when it comes to the World Heavyweight title. Show and Sheamus had multiple title matches between them, and Show – Del Rio looks like it’s got the same longevity.

Show’s been brutalising Ricardo Rodriguez to get over just how mean he can be, so expect Ricardo to take a few more bumps, but it’s unlikely that Big Show will bring the title home in this, their third championship match.

The shadow of the Money in the Bank briefcase is hovering over this one, so I’d predict Del Rio retaining, Show going “destroy the entire set crazy”, and an opportunistic Ziggler running in (he’s still glaringly absent from the card , after all), cashing in, and walking out World Champion. It would make sense that Ziggler has to take the sneaky win, especially after losing to Del Rio on the last Main Event before the Elimination Chamber. A tired and beaten up Del Rio doesn’t lose face when losing to a fresh Ziggler, so doesn’t get hurt too much by dropping the title. This would set up a nice Jericho Vs Ziggler world title match at Mania, and free up Show and Del Rio to go all hardcore on the grandest stage of ‘em all. Win win.

Prediction: Del Rio retains but loses the title to Ziggler’s Money in the Bank cash-in, leading to a Show Del Rio hardcore or streetfight match at Mania. And please, no more duct-tape.

Anyway, back to the match. Cena’s en-route to a face-off with The Rock, Sheamus seems on a collision course with Randy Orton and Ryback… well, then there’s Ryback, who’s lacking any real obvious opposition for the big show (no, not that Big Show) at the Metlife Stadium. Ditto the Shield. So here’s the dilemma: Shield have been booked as very strong, dangerous and sneaky, but are still very green. Then on the other side you’ve got a trio who have 24 WWE or Heavyweight title reigns between them. Both sides could do with going over to look strong on the run up to Wrestlemania, and there’s arguments for both getting the win. Probably the closest-run decision on the card, but my pick goes to…

Prediction: The good guys go over clean on the Shield, but they regain their badassery by triple powerbombing one of the faces (most likely Ryback) through a table after the match.

Match to determine the No. 1 contender for the World Heavyweight Championship at WWE WrestleMania 29

It’s tricky writing a preview and predictions article when half of the competitors in a match aren’t announced, and until recently it looked like that was what I was going to have to do. Luckily the WWE filled the glaring gaps in this No. 1 Contender Elimination Chamber match during the final days leading up to the PPV. With Orton, Mysterio, Bryan, Kane and a newly returned Jericho, Henry and Swagger in the mix, here’s what we’ve got: Orton’s been World Champ three times, as has Jericho. Mysterio has held it twice, Swagger, Henry, Bryan and Kane once each, so they’ve all got championship lineage. I think it’s inevitable that at some point it’ll only be Kane and Bryan in the ring alone, teasing again the friction between the WWE’s most dysfunctional tag team (expect one to eliminate the other). Thinking ahead to Mania, Orton V Sheamus seems like a lock-in, so he’s out. Swagger’s not been back long enough (and could you see the WWE pushing a right wing manager angle in a Wrestlemania main event?). Kane and Bryan will either implode before Mania and face each other, or just make it to the big stage and go into meltdown after losing the straps there. Mysterio still has some life in the Sin Cara team-up, so by a process of elimination (no pun intended) that leaves two likely winners: Jericho or Henry. Now this is a toughie, but…

Prediction: Jericho is the last man standing in the Elimination Chamber and challenges Ziggler for the belt at Mania.

After going at it on the Royal Rumble pre-show, Cesaro and Miz mix things up again, but this time on the actual proper pay-per-view. Which is nice. Cesaro has been booked as a very dominant US Champ as of late, and has been quietly impressing with some headline worthy moments, including a stunning Neutralizer on the Great Khali not so long ago. Miz on the other hand has been passed the torch (well, by torch I mean Figure Four Leg Lock) by the legendary Nature Boy Ric Flair. You can’t get a much better endorsement than that. With Cesaro holding onto the strap since August, it might be time for him to move on to other things, and putting the gold on Miz again would validate old Natch’s faith in the former reality TV star. Like the six-man tag, this is a toughie but my pick for this one is…

Prediction: Miz takes the title from Cesaro with a clean win.

A late addition to the card sees Diva’s Champ Kaitlyn defend her title for the first time against Tamina (“My Dad is Jimmy Snuka”) erm… Snuka. I think the WWE has been looking for a real dominant women’s champ for a while, and was en-route to booking Kharma as that unstoppable superstar before life took the turns that it did, so Snuka could do a good job of filling that gap – especially with the pedigree behind her Superfly Splash finisher.

Prediction: A new Diva’s Champ in the shape of Tamina Snuka.

WWE.com calls the Clay / Tensai team “boogying buddies”. I don’t think that’ll stick. I’ve deliberately watched some old Tensai matches (when he was Giant Bernard and part of the Bad Intentions tag team in New Japan Pro Wrestling) before writing this, to remind myself that Tensai can be an awesome tag team competitor when he’s let off the leash. An absolute monster. Really, really sweary, too. I was quite surprised at New Japan didn’t bleep most of his outbursts when beating the life out of someone in the ring. Yes, that’s what I’m thinking about. Not the dancing in lingerie thing. Definitely not thinking about that. Think about anything else. Even that Khali / Hornswoggle / Natalya dance-off. There, that’s better.

The Rhodes Scholars reunion here seems a bit premature, since they’ve only been ‘broken up’ for about a week or so, but there you go. Fly by the seat of your pants booking, right there. No titles on the line, no apparent future for the Rhodes Scholars team, so you have to give this one over to Clay and Tensai in what could be a squash match.

Prediction 2: The intro, mic work and dancing will last longer than the match.

So there’s your line-up for the 2013 Elimination Chamber. We’ll see you at Ringside.