This, the twenty-eighth edition of the most important wrestling show on the planet, was about one thing and one thing only; THE ROCK v JOHN CENA.

WrestleMania, my dear friends, was about to become ELECTRIFYING!!… again. 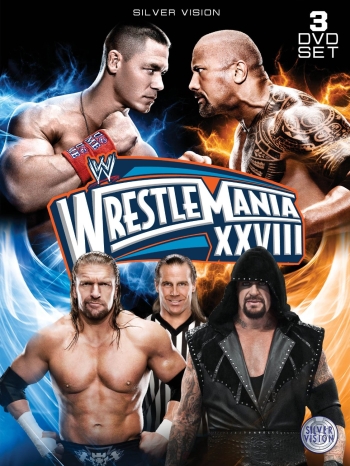 An amazing crowd of 78,363 were on hand in Sun Life Stadium in Miami, Florida to witness the return of The Rock to the biggest stage of them all and after the traditional singing of the American national anthem (performed beautifully by Lillian Garcia), WrestleMania kicked off with Daniel Bryan v Sheamus for the World Heavyweight Champion (the second time in a row the WHC opened the show)… in a match that famously lasted EIGHTEEN SECONDS. At the time, this caused uproar, but looking back on it, this result was fantastic for all involved as the storylines from then until now can testify.

The next match on the card had the feeling of being put together to give Kane and Orton something to do. That being said, both guys had a much better than expected outing and earned their paycheques. It’s a testament to Kane that after all this time, the character still garners the same aura and respect that it does… not bad for a gimmick many predicted would disappear once the Undertaker fued was over. The finish was pretty damn sweet too.

The third bout on the card had a really interesting build as WWE basically laid bare Big Show’s appaling record at WrestleMania, especially the comedic incidents. It set up an obvious result, but sometimes in wrestling you need the obvious face-shows-up-the-heel outcome. Predictable doesn’t always mean bad and this was as feel-good a finish as you could ask for. Full credit to Rhodes, Show and WWE for making it easy to feel sympathetic towards a seven-foot man-mountain.

‘Mania has forever been linked with celebrities, with at least one being involved in a match in some fashion. This year was no different as Maria Menounos teamed with Kelly Kelly against Eve and Beth Phoenix. It has to be noted that Menounos came into this match with two cracked ribs and two stress fractures in her feet (from training for Dancing with the Stars in the US). For a non-wrestler to compete under those circumstances is nothing short of astounding and full credit to her for fulfilling her commitments.

An interview with HBK sets up the next match as Undertaker and Triple H get set to go ahead one final time inside Hell in a Cell. WWE has been criticised (quite rightly) for diluting their gimmicks by having PPVs centred around them (I exclude the Elimination Chamber in this as I feel it belongs as the final hurdle leading to WrestleMania); none more so that the Cell. However, if any match belongs inside “Satan’s Structure” it has to be Undertaker v Triple H.

After a build arguably going back to WrestleMania XXIV when HBK retired Ric Flair, this match is the culmination of two “greatest of all time” matches (Shawn v Taker at WrestleMania 25 / 26) and an all-out war the previous year as The Streak survived against Triple H in one of the most brutal matches of the PG-era. With Undertaker being off-screen from that hard-fought victory until January 30th 2012 (the day after the Royal Rumble), WWE set the tone for the match by showing a series of vignettes where, although Undertaker won the match, The Deadman felt that he had won nothing by having to be carted from the ring. He needed this rematch to prove to the world he wasn’t done and to make sure the image of him being helped from the ring one year previously would not be his final legacy.

It’s matches like this that restore your faith in pro-wrestling and remind you why you became a fan in the first place. In the back of your mind, you know Undertaker’s streak is never going to be broken, but every year since Batista challenged him, there have been moments where you believed that was it (like when Triple H nailed the Tombstone last year). WrestleMania XXVIII would be no expection.

A genuinely emotional 30-minute thrill ride that drew you in from the first minute until the last. HBK was stunning as the special referee, the two legends (and yes, they are inarguably legends in this business) left everything they had inside the squared-circle and at times it was almost like a movie script with the amount of dialogue between the wrestlers and the referee.

During the Cell bout, just before the finish, HHH shares a look with HBK that is so subtle, but conveys EVERYTHING; “this is the end and I know it”. That, more than anything was pro-wrestling.

No one man could follow this, so it was rather apt that WWE decided to follow it with a 12-Man Tag Match for control of RAW and Smackdown. As is the norm with these matches, no-one really gets a chance to shine for long and it’s always been about the big finishing sequence as finisher after finisher is nailed until only two remain. This bout was no different and it didn’t disappoint… although the team that came out on top genuinely surprised me at the time.

The WWE Championship Match was next on the card and you have to feel sorry for Punk and Jericho having to be sandwiched between Triple H/Undertaker and Cena/Rock. It also had the hype of being touted as the match most likely to steal the show from an in-ring standpoint.

Off the bat, it has to be said that the match was a slight disappointment, but was still very, very good… just not what these two are capable of. The finish was nice though.

A brief interlude in which Brodus Clay actually did “call his momma”… and had Mrs. Clay come out and dance with her son and numerous others, it was time for the main event; The Rock v John Cena. While not a patch on Hogan v Rock (which is the closest match in terms of old lion v young lion experiences), it was still a very good outing with a worthy winner to send the fans home happy.

Unusually, the DVD release has content not on the Blu-Ray edition, which is a very nice touch. In addition to the pre-show WWE Tag Team Championship Match, the press conference and an amazing video package devoted to Undertaker and Triple H, we get a raft of extras devoted to The Rock.

First up is an interview conducted with Rocky Maivia just before the 1996 Survivor Series and with the benefit of hindsight, you can see a little of what would become The Rock, but it’s a shock to the system if you’d never seen “bland” Rocky.

Following that, there are two complete matches; v DX-era Triple H (with an appearance from Faarooq that ends with a piledriver on the stage – something you will never see in today’s WWE) and v Kane (accompanied by Undertaker). Both were from the peak of Monday Night RAW and were a great trip down memory lane. The third “match” is from Royal Rumble 2000 and picks up from the moment Rock entered at #24. It was a great Rumble and it was nice for an old-timer like me to see some faces from that era (Val Venis, Hardcore Holly, Crash Holly, Albert, Godfather, Al Snow, Gangrel, Test, Bossman, Billy Gunn and X-Pac to name a few).

Lastly, from the Rock-centric content is an episode of The Highlight Reel, which features appearances from Jericho, Christian, Rock and Booker T… not to mention a one-time-only Rock-a-roonie.

The third disc is devoted entirely to the Hall of Fame ceremony and the inductions of Ron Simmons, Mil Mascaras, The Four Horsemen, Mike Tyson, Yokozuna and Edge.

While not as good as previous ‘Manias, Rock v Cena and (especially) Undertaker v Triple H cemented its place as a must-see event. It’s weird, but you can tell the show was an outdoor event and it adds a little to making the event seem special.

There isn’t a bad match on the card and the backstage segments were all at least worth watching at least once, while the entrances for both Undertaker and Triple H were visually stunning. There was also a genuine “lol” at the Cell having its own entrance theme. I’m still baffled, however, that WWE would make so much of the streak, but not mention WrestleMania X-Seven in any of the build for either Triple H match.

The extras are great, especially as DVD buyers finally get something over their Blu-Ray brethren and even for those who watched the PPV, this is well worth the asking price.