Last year, at the twenty-eighth edition of the most important wrestling show on the planet, it was about one thing and one thing only; THE ROCK v JOHN CENA. This year, we were to bear witness to the most electrifying rematch in WrestleMania history.

In addition to that, we also had Brock Lesnar v Triple H in another hotly anticipated rematch, CM Punk trying to do what no man has been able to do in twenty previous attempts and beat The Undertaker at the rather aptly titled “Showcase of the Immortals” and, for a lot of people, a look to the future as The Shield barrel into New Jersey as the hottest ticket in town. 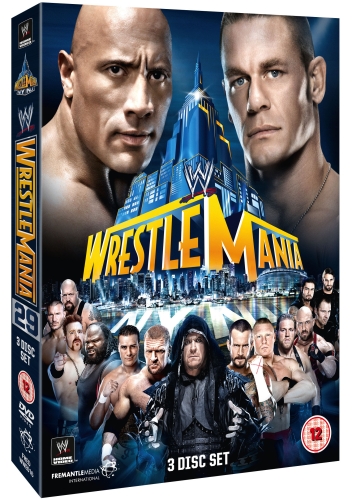 With, for some reason, America the Beautiful, not opening the show, the crowd of 80,676 had the show to end all shows kick off with inarguably THE success story of 2013; The Shield. WWE gets a lot of stick (some deserved, some not), but the way this trio have been handled is as close to perfect booking as you can get. The six-man was a fantastic opener and gave each man a chance to shine as the bout unfolded towards the right result.

After a look at the history or Rock and Cena (most of which had been seen on RAW / Smackdown beforehand), it was time for the super-heavyweights to bring a change of pace.

Mark Henry and Ryback collided in a throwback to the big-man brawls of the past; two behemoths who simply want to show the other that they are the resident monster in WWE. Mildly disappointing as the match was, it had moments of greatness; one of them being the fact the fans were behind “The World’s Strongest Man” for most of the bout and another being the awesome sight of Ryback getting Henry up for Shell Shocked.

The first title match of the PPV (but not of the night) saw the WWE Tag Team Championships put on the line. Team Hell No, like the New Age Outlaws before them, two singles wrestlers put together by circumstance who just clicked to become more than the sum of their parts were opposed by the Money in the Bank holder Dolph Ziggler and his heavy (and at-the-time NXT Champion) Big E. Langston.

Big E., like the members of The Shield, came from NXT to the main roster and made an immediate impact. WWE deserve a ton of credit for the current NXT (which used to be Florida Championship Wrestling); it is an amazingly good one-hour show that has good-to-great matches every single week.

It was a good bout, with Daniel Bryan being the star of the match. When the tag-team thing is put to rest, “The American Dragon” will be a major asset to the main-event scene as he can work with anyone and any style. In the same vein, Dolph Ziggler is the current hottest talent on the roster and easily has all the tools to be this generation’s Shawn Michaels… in my humble opinion.

As an aside; AJ Lee is ridiculously hot.

Fandango v Jericho was what it was; a decent showing for a new guy (who had been on the roster for years, truth be told) against a former World Champion. Some blown spots marred things, but for me this also had the right result. In fact, I’d say at this point, each match had the right hands raised at the bell.

Another disappointment was the World Heavyweight Championship Match with Alberto Del Rio putting the title on the line against Jack Swagger.

Mr. Swagger had came back with a vengeance and was finally wrestling like he had just realised his strengths, only to get busted for drug possession after winning the Elimination Chamber match in February. Due to this, you have to wonder if Vince changed the originally booked result as punishment. Either way, this was the first bout of the night where I felt the wrong guy walked out the victor.

With each wrestling fan’s taste being their own, what constitutes the best match on the card may vary from person to person, but the general consensus is that Undertaker has had the best match at WrestleMania for the last number of years; arguably going back to WrestleMania 21 with the exception of the Casket Match at WM22.

Putting him against CM Punk gave the longest-reigning champion in the last 25yrs a monumental legacy to live up to. Bouts against Orton, Batista, Edge, HBK (x2) and Triple H (x2) are examples of how to structure an engaging wrestling match full of drama, near-falls, high-impact moves and that edge-of-your-seat-can’t-believe-what-I’m-watching and I was so happy to say that the Chicago native delivered.

Easily the match of the night, this was 20+ minutes of sheer enjoyment and as past victims of The Streak have found out, there is no shame in losing to a legend in a setting like this.

The problem with putting a match so good on this early on the card means that the fans (who were into it from the off; a credit to the wonderful work by both men in the build to WrestleMania) were burned out for the remaining two matches on the card.

Triple H v Brock Lesnar was the first of the two rematches headlining the show and it started rather oddly as the dry ice machine for Hunter’s entrance caused him to suffer second-degree burns to his torso. Regardless of your personal feelings for Vince’s son-in-law, he deserves a lot of respect for then wrestling a hard-hitting brawl against possibly the hardest-hitter on the roster.

As good as the match between Triple H and Lesnar was, with the addition of both Heyman and HBK at ringside, the fans were still recovering from the previous bout (the horrible P.Diddy interlude didn’t help either) and their reaction to the action suffered as a result.

Had this been before Undertaker / Punk, I genuinely believe it would be considered a better wrestling match than it currently was. I mean, a hot crowd can be the difference between a good match and a great one. Take Triple H v Cena at WrestleMania was a good match on its own merits, but the amazing crowd elevated it to greatness. Another example is CM Punk v Cena at MitB in Chicago. As great as that match was, it was the fans who lifted it to a 5* modern classic.

That being said, both men beat the snot out of each other for our enjoyment and the finish was pretty damn powerful.

And so, the main-event one year in the making. “Once in a lifetime” is what they said all through 2011 as The Rock challenged John Cena to a match at WrestleMania XXVIII the day after WrestleMania XXVII. In the ten-second-attention-span of the modern era, to telegraph a match a full twelve-months before it would take place was a bold move. Add in that when this was done before (Savage v Hogan at WMV was a year-long angle, but even then the match was not announced the day after WrestleMania IV), there was nowhere near the amount of TV hours aired and there were only four PPVs over the course of a year.

“Once in a lifetime” was exposed as the marketing slogan it was as the cards were dealt to lead up to John Cena v Rock II. First, at Royal Rumble, Cena won the Rumble itself as Rock ended CM Punk’s monumental run as champ. It was from there that things kicked into high gear as both men set themselves up for the rematch, this time with the roles reversed.

“You think you can beat me? I know I can beat you!” – The Rock to John Cena

If you had seen the match from WrestleMania XXVIII, you’d be forgiven for thinking that you were watching a rerun rather than a sequel. Rock injured himself part-way through, but as fit and muscular as he was at the event, he was obviously not in ring-shape and it was clear to see Johnson was blown up early doors.

Again, the match was decent enough, but couldn’t hold a candle to the two matches preceding it. Because of this, it was a rather flat end to a mixed-bag of a PPV.

On the second disc, there is Miz v Barrett from the pre-show and full post-show that aired on the night of the PPV.

This is something that I’ve always enjoyed in UFC and it’s a great idea here too. Having analysts discuss key points going into WrestleMania and then dissecting things afterwards added an air of legitimacy to proceedings. It’s just a pity the actual full pre-show is not here.

As with previous releases, the third disc is devoted entirely to the Hall of Fame ceremony, with highlights being the inductions of Foley (although he overstays his welcome and this is technically on the second disc), Booker T, Trish Stratus and Bruno Sammartino.

Undertaker v CM Punk is the reason to buy this event from a match standpoint. Of course, the other main selling point is the entire Hall of Fame ceremony.

Puff Daddy getting so much time (even though, from a mainstream publicity viewpoint, I can understand why he was there) when EIGHT wrestlers who had worked hard to earn a mid-card spot on the show had to make do with a match (joined in-progress for added insult) on the following night’s RAW instead.

If P.Diddy had to have time on the show, a ffive-or-so minutes from each of the main-events (especially Rock / Cena and HHH / Lesnar) should have been shaved to give Tons of Funk / Funkadactyls v Team Rhodes Scholars & The Bella Twins their moment in the sun.

Positives from the set include the always impressive work from the WWE production crew. The videos highlight the Rock v Cena feud and the Undertaker / Punk rivalry were both stunning pieces of work. When I die and they’re putting together a video to play at my wake, I want WWE’s production team to put it together. I swear they could make even the most mundane of events seem like the greatest thing to happen in the history of the world.

The commentators deserve credit too as they worked really, really well together. JBL is awesome, as we all know, but Cole and King seemed to raise their game on this night.

For the Undertaker / CM Punk and the first WM appearance of The Shield, this is worth a purchase, but the real selling point is the Hall of Fame and the image we thought we’d never see; Bruno Sammartino on WWE television.