The Four Horsemen were of course a great stable and held numerous tag team titles. But there is currently a lack of tag teams and stables in both WWE and TNA, what do you feel this is down to?

I think a lot of it has to do with the lack of depth in the profession today, you don’t have the regional territories, you don’t have WCW that will allow 70 guys to be employed full-time, doing TV and working every night, from which the better performers would ultimately go to work for Vince McMahon.

It is a situation where opportunities are nowhere near what they use to be when I came into the business but the flip side of the coin is for those that are persistent and want it bad enough and eventually make it the financial awards for those few are just so much greater. They’re making more money now than we would have ever thought possible.

There has also been a lack of managers in recent years.

It is a different era, back in the day we were independent contractors and we all basically responsible for defining our own personas, that led to a diverse group of bizarre characters in the profession. It was the Mongolian Stomper that introduced me into managing, the managers served as an important function because they would be the wrestler’s spokesperson and forge the storylines, a manager would become an integral part of a wrestler’s character.

Nowadays you don’t have those bizarre individual characters so the need maybe is not there for the manager as it used to be. There was a spell where they went down the route by introducing the woman valets, and Miss Elizabeth and Sherry stood out from the pack. However, with the passing of time, things change and the role wasn’t there for the quote-unquote manager.

You spent some time working as a front office executive for WWE, what was it like working with Vince McMahon?

Vince was the first to have a vision once the Turner cable network started up and began showing wrestling nationally as an alternative product to all the little territories as we had known before. Vince had this vision and saw what was coming and he pioneered it, I often wonder what if it hadn’t been Vince McMahon, what if it had been Bill Watts, Jimmy Crockett or Eddie Graham where would the business be today, would there even be a business?

Vince had a vision of what he thought wrestling should be and saw it as sports entertainment, a lot of people were angry at him because he took that approach but he was looking to appeal to a much broader audience and in the early WrestleMania’s he brought in a lot of celebrities for crossover appeal not just for what happened in the ring.

If you watch the television programming today and put a stopwatch on to count how many minutes of actual ring action there is in a two-hour show, it’s not all that much, but again it’s down to the lack and depth of talent there is in the industry. 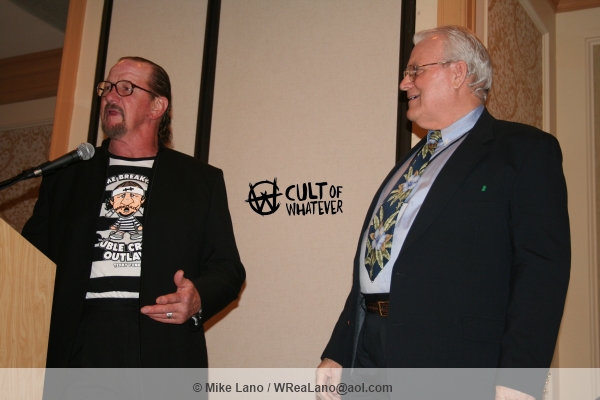 After leaving WWF you had a spell with WCW, what was it like working with Eric Bischoff?

I went to WCW right at the start of the Monday Night Wars, and it was 84 weeks in a row that WCW beat the Vince McMahon product in the ratings. The biggest difference between Vince and Eric is that Vince is a wrestling person, and was in the fourth generation with his children becoming involved in the business.

Eric Bischoff on the other hand had very little experience and it was obvious from the first time I met him, just after leaving the WWF. In our first meeting I thought as a businessman he would want to pick my mind about how the company was run and the philosophy having been with the WWF at the top level for eight years but all he wanted to talk about was how much longer Vince McMahon would last. Eric was obsessed thinking he would but Vince out of business, but I knew after that first meeting with Eric that was never going to happen, but wasn’t going to say that to his face.

Do you feel TNA will ever be able to compete with WWE?

I would like to think that the possibility exists but they have been around for ten years now and I always say you have one opportunity at a first impression and when they first began Vince McMahon couldn’t hire everybody that was in the wrestling business, so TNA picked these people up.

You then had a few people leaving WWE and joining TNA, but the first thing they did on television was not talk about how good TNA was but instead, they would talk about where they had just come from and why they left because they were being held back and it became a forum for individual grudges.

For the fan watching it was an opportunity for an alternative product, but the more time that has gone on it has become harder to take it to the next level.