This won’t stop the presses at this point, but in case you don’t know me, I LOVE TV wrestling. I just love it. When it’s done well it’s so much fun to watch, and luckily for me WWE does it well on an awesomely frequent basis, and this year is so exception. I could name fifty matches, honestly, but lets get right into the best work from Raw and Smackdown for the year… 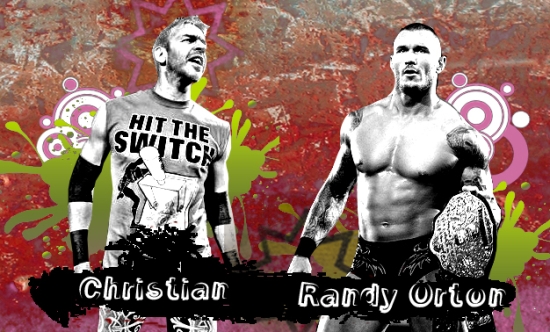 At the time we were all pretty pissed off about Christian immediately losing the belt for no reason (it certainly gave me the sh*ts with this match for a long time) but all the same its hard to take anything away from what these guys started here. It was quite the harbinger of things to come, as they began to counter spots and develop their trademark workrate style.

Early on Christian counters the Orton DDT by backdropping Orton to the floor. That little spot means so much to me in hindsight – the first of a thousand counters to come. I really liked the storytelling going on; Christian was the sympathetic underdog, immediately forced to put his lifelong dream on the line against a company ace who never loses, hanging onto the title with his bare hands. And Orton was that ace, head and shoulders above everyone else on the roster, and almost coming off as the heel as he dominated Christian for long stretches. Commentary was really putting over the story and the idea that if Christian lost the belt so soon after finally winning it, it would crush his soul, which ended up being exactly what happened.

The second half is where they really start going nuts. Christian makes a comeback and hits some big moves, attempts the Killswitch and BAM POWERSLAM! He tries his slap-in-the-ropes but Orton ducks and drags him into the DDT! This was so smooth, and again for what it represents going forward, an amazing spot. Also, Orton selling this as the finish and pitching a fit when Christian kicked out of it was AMAZING. Awesome nearfall. The crowd is starting to lose their sh*t now, this thing is HOT. More moves traded before Orton signals for the RKO, Christian counters, ends up in the corner, boot to the gut, springboard-RKO BITCHES! Everybody EXPLODES, Orton is over the moon, and all our dreams are crushed.

The rest is history. Regardless of the result this was just a hell of a TV match, with a great crowd, and it really set the tone for the rest of their awesome series. And, maybe just as significantly for me, it was Orton’s induction into the Smackdown Workers Club. 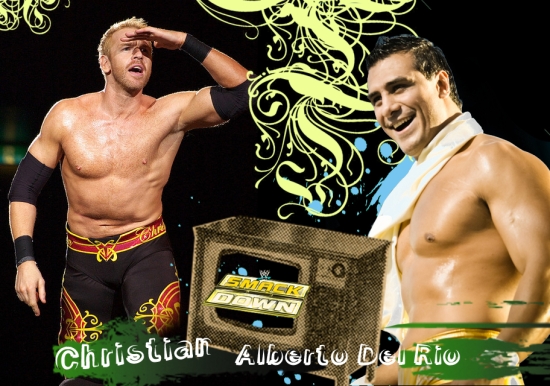 This was my favourite TV MOTY for a good while so I’m glad I still have a place for it on this list. This was pretty much the quintessential Christian babyface match, and that is a very, very good thing. The story of this match is that Edge is ringside but can’t touch Alberto before WrestleMania. I really like how they used him in this match, interjecting a big Edge spot when needed without overshadowing the guys in the ring.

That would have taken some doing – they were working like madmen. Christian not only works around hitting his signature offense but also busts out wacky moves like a dive over the ringpost to the floor, Rey-style, and a Frankensteiner. He’s wrestling a big match here, and really selling how much he hates Alberto and wants to beat him. He also sold his arm like a champ, as usual, and added other nifty stuff like an incredibly fluidly-set up slap-in-the-ropes. Babyface Christian was just something else. Alberto was also working big time here and looked primed and ready for his expected world title win. One of my favourite things about Al is the way he builds up a head of steam, runs full pelt and dives at someone and SPLATS. He usually does it outside, but in this match he runs to the corner, misses an enziguri, SPLATS, and gets Tornado DDT’d instead. Little moves like that make this match.

As well as big moves – like down the stretch when they went from armbar attempt to Killswitch attempt to Enziguri at lightning pace in a great nearfall. In the end we get the pay off of Edge finally getting his hands on someone (Brodus) which distracts ADR enough for Christian to win, and Christian also destroys ADR with a chair on Edge’s behalf post-match. The finish and aftermath were done perfectly well and really capped off and added to a great match. Matches like this are why I miss babyface Christian so much.

I’m sure nobody else would even remember this match, but I absolutely loved it. This was pitch-perfect Babyface Ace vs Midcard Heel star-making, where the young upstart throws everything he has and proves himself in the ring against the champ before going down. Ted looked like a million bucks by the end of this match. It was back-and-forth all the way through, with neither guy retaining an edge for any length of time. Orton dominates early exchanges like a good babyface ace should, which makes Ted step up, land big counters and get plenty of offense in, which in turn forces Orton to fire up to be able to put away this unexpected challenge.  Excellent sh*t.

It’s the story that sold me on this match, and the work itself matches it. Physically these guys were on fire. Little things like Ted mirroring Orton in the way he pulls a guy right to his feet and looks him in the eye before throwing a DROPKICK, but Orton himself blocks it and turns it into a slingshot where Ted LAUNCHES into the corner. These motherf*ckers are crisp as hell. They also bring the badassery; later they’re up the top and Orton decides to handle ya business son and fires off wicked HEADBUTTS that bust his face open hardway before hitting his nasty snap Superplex. (Trivia note: any time Orton has accidentally bled in a match this year, it has delivered.)

I popped huge when Ted broke up Orton’s subsequent comeback sequence by rolling him up out of the Orton backbreaker and hitting his sweet Spinebuster Bomb. Ted, again, keeps up with Orton all down the stretch until finally Orton has to pull another creative RKO finish out of his ass as he ducks the Shinsuke Lariat and wins the ball game. But everyone is a winner and this is TV wrestling at its best. As it happens its also Ted’s last match before the babyface turn, and funnily enough probably the best singles match he ever had as a heel.

It’s the first triple threat on Raw, the one with Punk, that everyone went wild over, but I think this one, held two weeks later, was pretty much almost as great. Truth subbing in for Punk in the equation didn’t hurt at all. Of course, we have three-way spots up the wazoo; right at the start Rey was cut off on a run by Alberto running interference with a dropkick. Shortly after Al made a trademark SPLAT on the outside, leading to Truth taking over with some wicked barricade tossing. Tossing guys into barricades, that is, not tossing barricades.

So the next part of this match was Truth getting heat on both guys and looking good, but of course, it’s not long until we’re back with the crazy spots, this time a Tower of Doom variation with Rey splashing Truth off Al’s shoulders, which I loved. Rey is beautifully cut off from a run by Alberto’s sweet tilt-a-whirl. Then we had a super sequence where Alberto gets behind Rey in the ropes, Truth on the apron slaps Alberto repeatedly before sunset flipping Al who GERMAN’D Rey so hard he flipped all the way onto his feet before he died. A GREAT f*cking spot.

Alberto busts out a sick Backcracker to lead us into the stretch, where basically all three guys threw bombs trying to get a win. Here Lawler makes the point that they’re all so exhausted that none of them could actually kick out anymore – the only thing keeping the match going was guys breaking pins. And, true to his point, nobody kicks out after this point. I thought that was a great piece of commentary and a great piece of detail work. A whole bunch of nearfalls are barely saved, until, just like the first triple threat (spoiler alert), Rey FINALLY hits the 619 combo on Truth, and, once again, the third man swoops in, but instead of stealing the pin Alberto pulls Rey right off into the armbreaker for the stolen sub. I really, really loved the story of the match playing out here, and this was another awesome triple threat. 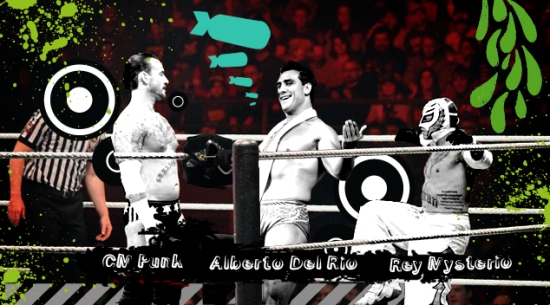 The last match was great, and this one, the original version, was even better. Lists aren’t supposed to be repetitive, but I couldn’t choose between them so they both go in. This is probably the best triple threat match I’ve seen in a long time, just a completely nutty, balls-out sprint with three top workers.

I loved all of the three-way spots, of which there were millions. The first 619 was cut off by an Alberto lariat. It was actually Falls Count Anywhere, thanks to whatever 3 hour Raw this happened to be on, so early on Punk Sunset Flips Alberto onto the FLOOR. Then Rey comes flying out and sentons Punk’s HEAD into the barricade. The next 619 attempt (on both men) was countered into the GTS into the armbreaker into a KICK in a super slick sequence. One of the coolest spots was Rey wheelbarrowing Alberto and getting GERMAN’d hard, with Punk breaking the subsequent bridging pin with a leg sweep. Cool as f*ck.

But then best of all, Punk gets DRILLED with the usually-mundane ‘whip him into the corner and run after him into a boot’ spot, Rey Sentons Punk off the top and keeps running right into a tope through the ropes outside onto Alberto! REY IS EL F*CKING GENERICO! One of my favourite spots in FOREVER. And they aint even finished yet, as Rey springboards and Punk casually walks out of the way a la Samoa Joe, and I marked again. The final cool ass three-way spot was Rey trying and missing a Frankensteiner right into Alberto locking on the armbreaker and Punk quickly comes off the top with a leg drop to break it up. (Always the Frankensteiners in these lists…) In the end Rey FINALLY hits the 619 only for Punk to swoop in, post him and steal the pin, as I alluded to earlier. This was straight-up awesome for 12 minutes, never a dull moment, with a million incredible spots. Great work.