As someone who cares far too much about it, I’m super happy with the quality of TV work this year. I mean, after the first week of WWE TV there were already six great matches that I loved. And none of them made it even close to the Top 10 by year’s end. Too much greatness. Anyway, we’ve already covered a lot of it in Part 1, lets get right back to it.

These guys. No matter how bored I was with their feud between matches, whenever they wrestled, it was awesome. Even for the sixth time. Actually I was quite comforted by the knowledge that as soon as this match ended the feud was guaranteed to be over.

Anyway, not before some MORE AWESOME. If their No Holds Barred match was essentially Orton/Christian Countering in a garbage environment, then this one was Orton/Christian Countering within the confines of a cage, and the best spots of the match exemplified the seamless merging of their style with the gimmick. Christian comes off the ropes, Orton makes the powerslam motion but Christian sees it coming and Orton scoops the air, but when Christian comes again Orton tosses him into the cage, and as he bounces off Orton HITS THE POWERSLAM. Orton tries the DDT, Christian tries to counter by slamming Orton into the cage, Orton blocks this, hoists him up to run and spear him into the cage, but Christian drops down and REVERSE DDT. Best of all, Christian kicks him in the corner and goes for the springboard, Orton is ready with the RKO, Christian sees it coming and as Orton spins around with his back to him, arm up, Christian quickly tries to climb out instead, only for Orton to drag him down into the Orton Neckbreaker. Christ Almighty. These guys just continue to blow me away with stuff like this.

So much other cool stuff as well. Orton going nuts with the headbutts before hitting the Superplex. Christian tossing Orton off the top rope and immediately BAMFROGSPLASH. Great moment. Chriatian goes for the Spear, Orton Leapfrogs, goes for the RKO, blocked, BAMSPEAR. Christian goes for the Killswitch, and Orton counters by throwing Christian through the ropes and holding on to deliver the Orton DDT, which is the first time I remember him setting it up like that. The finish ruled too as they were battling on the top, Orton finally goes Psycho, KILLS Christian’s head on the cage and hits a SUPERRKO to finally end it.  Always, the RKO. A wonderfully fitting ending to this series, a great cage match, and great TV. 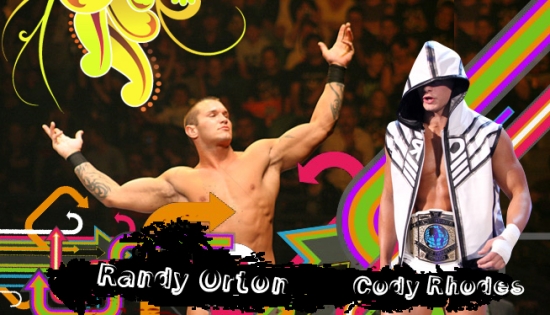 To explain this match in a sentence, Orton and Cody worked a Street Fight on television for half an hour without using any actual weapons. Well technically they used one – Cody’s mask – but I’m painting a picture here. Which is that these two guys went out there and had a hardcore match for 25 minutes using almost nothing but their own selves. And man, it was so, so awesome.

In the absence of plunder these guys just beat the crap out of each other. Well, mainly Orton beat the crap out of Cody, but Cody got his shots in and was always competitive. They brawled in the ring, they brawled around ringside, they brawled in the crowd, they brawled up the ramp, they brawled through two commercial breaks. Cody’s baggers were sacrificed. Cody’s mask was literally broken after both guys used it to hit home runs with the other guy’s face. Orton was bleeding from his head. This was a WAR. A war with creative spots like Orton doing Ten Punches on the guardrail, and his lightbulb going off for the idea to turn his planned suplex into the ring into the Superplex. Cody was also great, countering the powerslam with the Goldust seated uppercut, popping up out of nowhere behind the barricade with a wicked mask shot, and later targeting the leg, using the Figure Four and using the opportune position to knock Orton loopy with the mask.

Towards the end, Orton finally makes his comeback but Cody still blocks the RKO and hits a Beautiful Disaster that KILLS Orton in a super nearfall. They end up outside again and, over 20 minutes into this battle, they start throwing down the punches all over again with crazy intensity and that is the moment that I completely lose my mind. Cody has manned up so much in this match that it takes a DDT off the barricade onto the floor and an RKO to finish him off. This was just so awesome, a brutal war and a total coming out party for Cody as a serious player. He looked like a million bucks when this was over, and Orton, as he so often has done this year, looked like the best in the world. 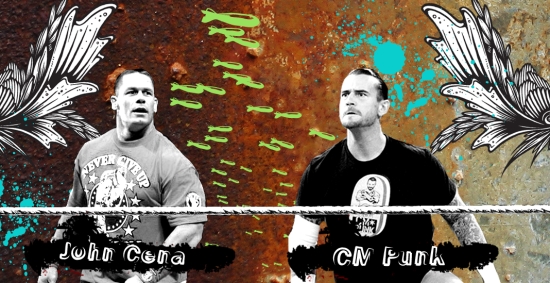 This was just a great, balls-to-the-wall sprint. I like that their PPV matches were long, drawn out, half-hour epics, but here on TV they know they dont have time for that, and instead realise they have to throw some pretty heavy bombs if they’re going to get the job done in 15 minutes. Cena almost immediately goes for the shoulders, and gets all the way to the 5KS before Punk rolls him up. Punk then gets straight into the knee-bulldog combo. This is all in the first few minutes and yet doesnt feel rushed at all. These guys just know they need to seriously handle ya business son right from the bell if they’re going to win.

And of course, they work really hard switching stuff up again – FU attempt and this time Punk holds onto the ropes and hits the hilarious “I’M FLYING!” springboard clothesline. The GTS is rolled into the STF attempt, blocked, Punk misses a Kick and Cena lands the crossface instead (in Edmonton mind you…Jesus). Punk goes for the elbow and misses, allowing Cena to go for his own dive and he nails the leg drop. The bombs are really flying now, as Punk hits a fairly early GTS for a nearfall. Punk counters another FU by AmDrag Elbowing the F*CK out of him and hitting a sweet KNEE in the middle of the ring. Cena barely survives this, then BAMFU! Kickout! Cena CATCHES the crossbody and rolls through once again, FU-NO ROLLUP! Super nearfall.

Of course, we get a lame ending with Nash allowing Cena to finally pin Punk. But whatever because this match was totally boss and a fitting bookend to their wonderful feud.

Orton and Dolph had three great matches on Raw this year, but I think their SD one was the best of all. Watching these two guys you cant help but be impressed with how great they are physically; they are so f*cking slick and everything they do just looks amazing. And they click really, really well together.

The way the match opens, with a lock up, a big struggle and a stalemate leading to Orton giving an appreciative nod at Dolph’s skills, that really sets the tone here; once again Orton is the ace and Dolph is the young upstart keeping up with him at every turn. The early work was just great fun to watch; again, these guys are off-the-charts great physically. Then suddenly Dolph decides to punch Orton in the face. Bad decision. Orton NO SELLS and goes after him, Dolph runs behind Vickie and she puts herself between them, but Orton doesnt blink and LEAPFROGS OVER HER to Lariat Dolph. AMAZING moment.

Its the little things that are so good here. There’s a point where Cody is putting Dolph over on commentary until Orton cuts him off with a super quick Garvin Stomp and Cody just shuts the hell up. The way Dolph climbed to the top rope backwards to avoid being snuck up on, but Orton still reaches him and hits a nasty Superplex. At this point Orton fires a right hand, but Dolph quickly shoots back and we get this wickedly intense striking battle that Orton has to win before he can finally go into his comeback – I loved how Dolph made him really work for it. Then Oh My God, Dolph blocks the RKO and hits a SUPERKICK, uses the cover where he sits down and pulls both legs, but in his eagerness to win he pulls too hard and Orton just slips out from underneath. MY GOD. Greatest freaking nearfall you ever saw in your life. An RKO finally gets it done, and that was seriously awesome sh*t. Both guys worked their asses off and this was immense. 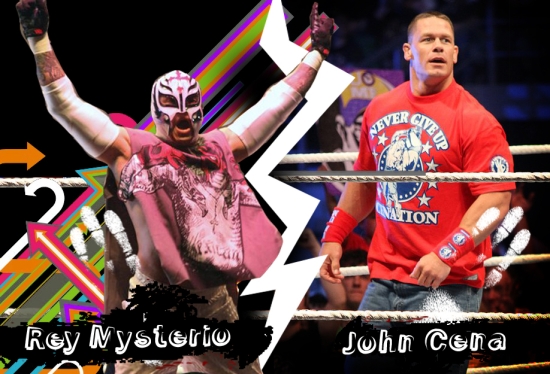 When I heard this match announced I thought “Rey and Cena having a babyface match, thats a dream match right there.” And you know what? It totally was. Everything just clicked perfectly, even beyond my expectations.

This was a title match, remember, so I like how they started off as super serious babyfaces having a title match, with headlocks and feeling each other out and sh*t. Then soon enough, Rey does a somersault plancha outside, then Cena whips him into the stairs but Rey BALANCES before Cena ducks his dive and KILLS him with a Lariat on the floor. This sh*t is so ON!

I loved the way these guys made this special, busting out new/old moves and creating new counters for everything. These guys have the most established babyface movesets in WWE, there’s so much to work with and they went to town. Rey used the split-legged moonsault, which I havent seen since 2009. Cena caught the first 619 attempt for a powerslam. Cena went into his shoulder block routine but DROPKICK! Rey escaped the Spinny Slam, went for his wheelbarrow but Cena caught him for the Spinny Slam! I have to stop and note here that halfway through, Jerry Lawler pointed out that John Cena hadnt thrown one single punch in this match so far. I dont think I have ever marked out at a line of commentary so hard before. That was just the PERFECT way to explain what this match was: an honourable, babyface, straight wrestling match for the title. I dont think Cena ended up throwing a punch the entire match either. He didnt want to punch Rey in the face, they’re friends and he simply wanted to out-wrestle him to win the title. Incredible detail.

Things got completely nutty down the stretch. FU blocked, Cena catches Rey’s crossbody into the FU again only to be ‘RANA’d. Rey hits the Senton but Cena rolls through into the STF but REY WITH HIS OWN STF! The craziness of someone doing that to Cena is unreal, and you should have heard the POP this got. Insane. Even better, Cena counters with Strength and stands up right into the FU, only to COLLAPSE UNDER THE WEIGHT! That was so awesome because I thought the Strength FU would be the finish. And sh*t keeps getting better because from here Cena crawls over to the ropes with his bad knee and BAM619! It was just such a fluid and natural setup that I marked huge. Now Rey goes for the splash in the same corner where he hit it on Miz 90 minutes ago to win the title (details!) but Cena’s knees are up! Rey tries a ‘rana in the corner, Cena TOSSES him and he DIES, and Cena hits his leg drop to Rey’s front which was an awesome nearfall. Finally Rey goes for a 619 one too many times and runs right into the FU. Argh.

Just an incredible piece of TV. Even the incidentals add to it: J.R. called it. No Cole. There was no ad break even though it went 15 minutes. And when it ended, “Cult of Personality” hit. But man. Two of my favourite workers at the top of their game having a straight-up babyface TV match, with all of the moves and counters I could dream of. That sh*t is magical.