Having not actually watched anything more than the opening match and end of the main event of Hardcore Justice (yep folks, it was that painful!) I should be worried I won’t get this week but you know TNA will replay every interesting second from the PPV this week so I’m not worried. A lot of weird decisions have gone on before this week and I’m bracing myself for a few more.

So, Angle beats Sting with use of the chair at Hardcore Justice and is going to run the company his way now he’s champ. This all clearly makes sense to someone but not me..

Immortal (minus Hogan/flair/Eric) come to the ring. Bully runs down Abyss losing again. Are we really teasing Abyss turning face? He’s like pretty much the most definite heel only guy they’ve got. He announces Steiner V Gunner V Bully V Crimson later, now call my psychic but the guy with the undefeated streak V three heels has only one outcome. Bully now launches on to Anderson (who should now be labelled “possible face turn No.2”) and he’s getting cheered, Anderson that is. Bully gives him some props about being tough and belonging in Immortal. Bully goes for the shake of the hand so someone is getting beatdown. Anderson kicks and hits bully, then Steiner and gunner but then Immortal beat him down and bust him open. Welcome to TNA’s latest faction the members of “Security”, not really but things don’t calm down until the road agents come out and Anderson is stretchered out. 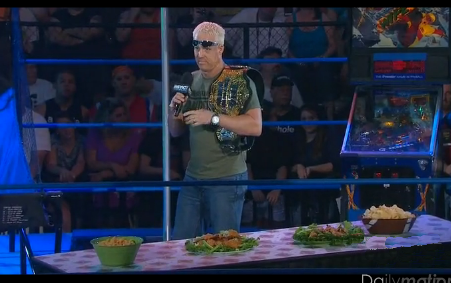 What is this all about then? Anderson gets turned heel and made champ which (given the roster, degrees of crowd overness etc) is the right decision. He can’t be carrying an injury because he’s worked some full bore matches since he dropped the title. It can’t be a need to fill any face vacancies at the top as Fortune cover all the bases needed there plus guys like Crimson. So has Anderson f-ed up somewhere or is this Russo being so stupid to think he can flick Anderson from Heel to Face without burying the guy along the way?

Bischoff says Anderson was a mistake…. so why tease Bully being nice to him before the beatdown? Just turn on the guy and elicit some sympathy instead of have him attack everyone stupidly and get, in the end, a deserved kicking? I’m probably asking a little much to get some consistency in the booking.

Maddison Rayne V Mickie James is up. This is a number one contender’s match since Mickie Lost to Winter at HJ. Now, it’s never explained why, despite being the losing champ she doesn’t get an automatic rematch. Maddison may be a great personality and her mic work is good but she’s pretty sloppy in the ring a lot of the time and really slows the pace in places here. By the way they’re calling Winter’s mist “blood”. Mickie wins with the DDT in about 3 excruciating minutes. Kind of nice spot where Mickie ducks Maddison by posing with her tiara but really that kind of says it all in the fact that was the highlight of the match.

Angle is arriving and I thought was getting big boos but in fact this is for Robbie E and Cookie who are in the ring. Aries is on commentary and the match is against Kendrick. Why the change of gear for Kendrick? Unless we’re changing his gimmick (would hardly be surprised having only just got it over) the change to Sabu-esque Arabian leggings is odd to say the least. Robbie E is like the best example of how to not take advantage of pop culture in wrestling. I mean, Zach Ryder is taking that whole Jersey Shore thing and then doing his own thing and Robbie is simply a one dimensional parody. Shame because Robbie himself is fairly competent though Cookie is yet another woman hired for her ability to scream really loudly during a match. Ending comes as Cookie, who is doing this really awkwardly and in plain view of the ref, sprays hairspray at Kendrick but hits Robbie and Kendrick hits Sliced Bread for the win. Robbie and Cookie argue a bit so maybe they’ll do something there…. probably not though.

Devon and Pope have another “Devon doesn’t trust Pope” segment, now I like that for once we’re not rushing this angle and Pope has been great in this BUT I wouldn’t mind seeing a little variety in these moments. Maybe a bit more from Pope perhaps? Can’t complain really since 2 months ago everyone thought Pope was going anyway.

3 way tag – Tenay spends a lot of time telling us how it’s only one tag partner can get the points for the win…. so it’ll be one of Beer Money then since none of the others are proper tag partners. Daniels out on commentary Tenay: “What are you out here for?” Daniels “….” Tenay: “hold that thought it’s a break”

Daniels is challenging AJ again…. come on TNA, you’ve got more than 3 people on the roster why rehash match after match. Actually that was quite a fun match fo0r what is was, frenetic and full of action. I mean you’d hope that given the talent in the ring it would be nearly impossible for it not to be at least mildly entertaining. Roode’s second in the standings now behind crimson so you have to say they’ve played Roode’s come back nicely.

Another recap of the ending of HJ. Interested? No, thought not. Angle is on his way so we’ll find out.

Crowd booing Angle so as long as this is a proper heel turn and not for a few weeks I can, at the very least, be happy that we don’t have to put up with face Angle which has been dull recently. Sounds like piped boo’s all through this because the impact zone never bothers to boo for more than two seconds even if they revived Stalin and had him piledrive the American flag. Angle blaming Dixie Carter for all the stuff about Jeff and Karen. God, really? Angle saying he’s going to destroy all the young talent to hurt Dixie because she lied about knowing about the affair. How have we come to the situation where somehow the title holder has “control” in the company? It makes no sense. Also Kurt made 80% of this promo looking right down the camera so it’s a bit like being molested by Angle. Sting on stage but he’s taken out by Hogan who is apparently been the one telling Kurt about what Dixie did and didn’t know. Please tell me Angle isn’t joining Immortal.

ODB & Jackie V Tara and Tessmacher – Miss Tessmacher is now Brooke which sounds sh*t. Seriously, the only reason they can have gone for her real name is that she can’t remember any other. Tag champs do look good though, kind of matching black and red outfits. Urgh, why are they keeping up with Brooke grinding her ass in people’s faces? It’s not a face move; no one thinks it’s sexy or hot. I doubt even Lawler gets a semi watching that crap. Jackie is very loudly calling for ODB not to attack Brooke from behind… so face switch for Jackie then. More shouting from Jackie. Seriously? Two weeks ago they were jumping people left, right and centre and now Jackie is against it? “Right on the bloomers” is the comment of the night from Tenay! Wow, what a spear from Tara! Roll up from Brooke on Jackie for the win. Ah, ok so it’s less that Jackie is turning face but that both girls had to behave to get a contract. Nice dynamic actually and for all of the poor quality of Tessmacher it wasn’t half bad and once again, that spear from Tara was beautiful. If you want to see a spear taken right watch that.

Oh, so they’re bringing a 220 weight limit to the x division. That’s good from the perspective that no more Abyss and that kind of guy. Looks like TNA are hiring the welsh guy from DX as well as Xima Ion and I think I saw a couple of the other guys from the DX qualifiers there so they do seem to have replaced a lot of the people who have left. Not of course that that means we’ll actually spend any time getting them over of course.

Loooong Jarret segment where he basically beats up two Mexican guys until Hector Guerrero runs him off. Could have been half as long for the same impact or for preference not at all. 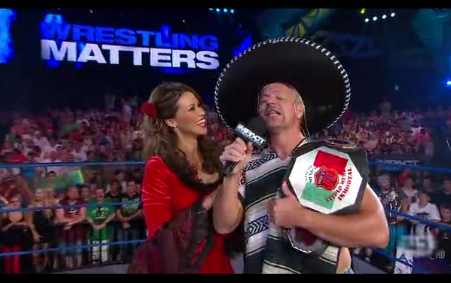 Man, Eric Young on another goofy pre-taped segment. Hope this was funnier than last weeks. Actually, it was and that’s mostly because it was all Eric Young, no one can keep up with him that’s the problem.

Anderson is back in the arena? Lol, Bully sparing out eyes from a further beat down to Anderson.

Right, so this is a fatal four way match but the ref orders Steiner and Gunner to the outside? And now Bully tags in Gunner? What the f*ck is wrong with you, TNA? And now we’re distracting the ref? It’s a four way again, surely this is no DQ? Crimson rolls up Gunner for the win but Angle attacks Crimson. Why did Angle take of the knee brace and then not go after the knee immediately?

Another spastic clusterf*ck of a week for TNA with booking thrown around like confetti. Actually it’s more like throwing sh*t at a wall and seeing what sticks. You can’t tell me heel Kurt is a more sensible idea than heel Anderson? Anderson is only good as a heel and whilst Kurt can work heel at this point in time the crowd love the guy so keep him face. I know I said I’m bored of face Angle but clearly I’m in the minority by crowd reaction.

We had a new women’s champ who we’ve had to see on screen for the last 3 months in a horrific angle not show up on this show at all. We had Mickie James win her rematch despite no explanation about why she had to in the first place.

The whole Anderson thing is mystifying beyond belief. Whether you like the guy or not or think he’s got potential or not the fact was that TNA were pushing the guy to the moon and now within 3 weeks he’s been totally buried. That’s just stupid, it’s not like TNA is blessed with so much talent that they can afford to bury Anderson and then bring him back. They’re already relying on Bully ray to do all Immortal’s talking and rightly Bully is playing the “tough guy in charge who lets everyone else do the dirty work” and is doing it well. So why take Anderson out who can at least do his own thing within Immortal and give the group a difference “voice” than just Bully. Never even mind that we’re looking all set to turn Abyss face by the look of things.

The X division may have drafted in load of new guys but if they still are going to get their one regulation match and TV spot then what’s the point? You’ll never get even half of these guys over and when you consider they’re already ignoring guys like Doug Williams why would you even bother pushing a guy like Jesse Sorensen who’s as generic as they come?

They only thing that’s vaguely keeping my interested is the BFG series because I’m interested to see who TNA pick to be the 4 way participants and the eventual winner. Logic says it’s Crimson, Roode and two others and that at least one of those will be from Immortal. I’d hope they chose a guy like Pope or even Storm and really start to push the guys who have heat and aren’t simply relied upon for their past history.