The internet allowed me to watch TNA’s arguably biggest PPV with a degree of leisure and at a less ungodly hour which was good because had I either paid or stayed up for this I’d need more than a double espresso to pull me out of bed.  The question I was left with was “Is it better to be awful and have poeple tune in to watch the car crash than be so bland and predictable that it feels like de ja vu to watch?”..

First up the 8 man X division match. Why make it 8 man but with the tag in rule? look absolutely ridiculous having 6 man hang about not doing anything in what is the “fast paced, high flying” division. It’s the freakin’ X-division, these guys should be flying round that cage like sugar-gliders on speed. No Alex Shelley by the way, still injured according to Tenay. All the proper faces go out first (Suicide, Lethal, Amazing Red, Jeremy Buck and Sabin) leaving Max “Mungo Jerry” Buck, Robbie “Parody keeps me current” E and Brian “no alignment” Kendrick. As if the result wasn’t already totally predictable this final three cemented it. The ridiculous Robbie E goes out leaving the one person who’s had any build and Brian Kendrick. God damn, what an awful finish to this match! Kendrick and Buck trade being thrown off the top rope like it’s no biggie but some how a ref bump causes Kendrick to die in the middle of the ring and Buck climbs out. What a waste really, if it had been a gauntlet match or something where more than one guy could be in the ring at once it would at least have been more entertaining. Max was destined to win this as who has even really seen anything from any of the other guys in the lead up to this? 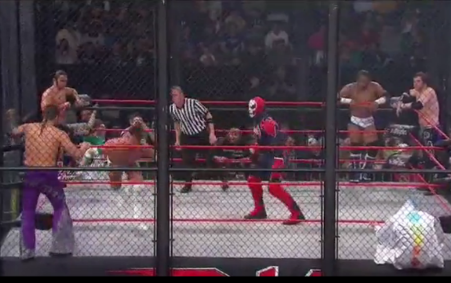 Total Non-stop Action: Except the 6 guys on the outside.

Great promo from Steiner backstage, understood about 1/3 of it. Wonder what happened to Crimson’s face though? Perhaps he’s taking Moonsault lessons from Matt Hardy.

Next up the 4 way tag match. When did those belts even last appear on Impact? The Cincinnati Crowd are hot for Steiner which isn’t hard really given that I doubt less of a crap could given about most of the other guys in the ring.  It’s a solid enough match for the most part nothing, nothing of note really takes place until Steiner gets the hot tag and Belly-to-Belly Suplexes everything in sight. There’s a moment with everyone levelling everyone else which was a bit much but saved by Eric Young’s leopard print Speedos. Now everyone has had a turn seems like the real purpose of the match (ie Steiner/Moore) is going to happen. Ooops, bit of a botch as Steiner or Moore forgets which corner they are supposed to be in (yeah, it’s going to be Steiner) so the spot where Moore tags himself in doesn’t work and they have to redo it again.

Eric Young climbs up the cage and over, realises he can’t climb down the front of the cage in front of the hard cam so Spidermans to the left so we can actually see what’s going on. Inside we pretty much miss Moore hitting his finisher on one of the British Invasion for the win. Nothing particularly wrong with the match but it didn’t really go anywhere and would have been flat I think without EY doing his thing and Steiner doing his. 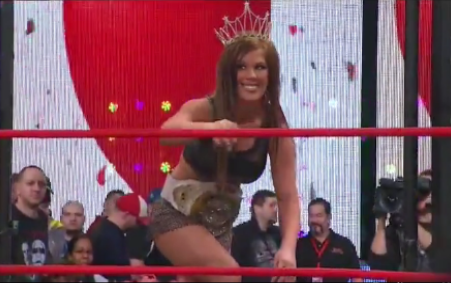 And the award for best smile in the face of imminent squashing goes to….

Good backstage promo from Maddison, like her work when she’s not really screeching so much. In case people weren’t aware Mickie James is carrying a legit injury from about a month ago so the fact that this is over in a minute of cage hits and a DDT isn’t surprising. I don’t know whether the 1 minute squash was really the way to go but the actual result was surely going to be the same so it doesn’t really make much of a difference. I think I would have just brought forward any plans for Tara to turn on Rayne and had her take the champ out on the way to the ring and allowed Mickie to win that way which would leave an amount of the Rayne/James storyline open for future since the result was “tainted”. This also explains why we got a long rant from Eirc Bischoff earlier on that went exactly nowhere, filler.

The next real match is The Pope V Samoa Joe. Now for the build I thought this was going to have some sort of special stipulation as Tazz was at pains to remind us that this was “the Street V Submissions” and he even seemed to hold onto that at the start of the match but it turned out to just be a normal match. Nice work from both guys right from the start. I really liked the trading slaps spot in the middle of the match. Dinero is doing a good job in there and looking for quick escapes and The pope show of his butt to the live audience for some inexplicable reason as Joe stops him from going up the cage with a fist full of speedo. I hope Momma Joe taught him to wash his hands before he eats. Nice finish with Joe hitting the Muscle Buster but then looking on the Rear Naked Choke for the win. For the feud with the lamest build this match was really good.

Now a match I have so little hope for that I barely managed to keep focused on it, Morgan V Hernandez. I suppose you can’t really complain when something is as good as you expected it to be but given that I expected this to bore me to tears that doesn’t say much. Watching Morgan and Hernandez run into one another for 10 minutes isn’t my idea of fun. If you closed your eyes it sounded like tow people playing conkers with sides of beef. The punch through the cage was nice enough and the carbon-footprint in mid-air at least was satisfyingly final for this feud to end. Morgan indicates he’s back in the title race because of course what TNA needs another face gunning for the belt.

After the match the Knockout tag champs have a bit of mic time and BOTH get beaten up by velvet sky. Seems a fairly crappy way to treat even heel tag champs given that Angelina Love has kicked Sky’s ass the last two weeks.

Karen Jarrett backstage in the kitchen of the venue judging by the sink; nice to know she knows her place. For Karen that was a fairly decent promo. We get, for the millionth time, the VT going over the Angle/Jarrett feud. finally this match gets underway after Karen is sent to the back (you don’t need to be mystic Meg here to know what’s going to happen). Why the hell is the ref counting pin falls if the first fall is submission? I really wish Angle had just laid there and gone “yeah, you got to three now what?”. The cross arm breaker into the ankle lock was very nicely done and so Angle picks up the first fall. Was I the only one who hoped the TNA cameraman tripped over something when they did the shot running behind the crowd and towards the ring? Angel goes for the triple German suplexes but wait so the ref thinks it illegal for JJ to hold the ropes? Isn’t that how you normally break a hold? Lol at Angle using the RKO, not bitter at all Kurt. Karen out, pepper spray to her ex-husbands face (and for some reason a  little bit just into the cage for no reason). Ref bump as Jarrett crawls to the exit where Karen is waiting Ankle lock to pull Jarrett in and a guitar shot! JJ goes for the exit again the ankle lock is applied once more but this time Karen slams the door on Angle. That was a good match and even though others had predicted it I was surprised that Angle didn’t pick up the victory here. The bad news? More Angle/Jarrett angle all over TNA plastered as the most personal feud in wrestling history. 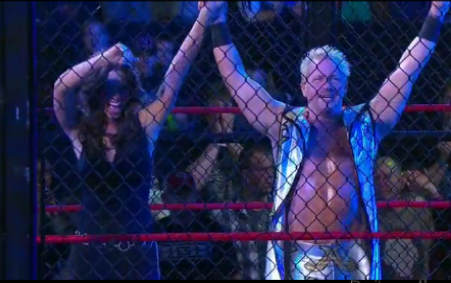 Yay, another month of this….

World Title match and ….. Wow, disappointed. It was booked like a 7 year old would. As soon as Hogan came out with the pipe you knew exactly the way it would go. I was hoping that this would actually be a good match for some reason, I mean, if TNA can’t lift themselves from the mire for their world title then what hope is there? If the shortness is down to Sting not being able to go the distance then they need to get the title off him asap because that’s dismal for their 2nd biggest PPV world title match.

Immortal V Fortune is our main event which I suppose given that the lid is put on the cage for Lethal Lockdown makes sense logistically if nothing else. Everyone is going to be around the ring from the start it would seem? So why when it’s 2 V 1 on the outside why don’t Fortune kick Immortals asses before they get in the ring? They can’t get DQ’d and you’d assume that Beer Money  could take  Bully Ray easily enough. For me that was as  good a match as that kind of Charlie Foxtrot can be. The repetitiveness of having the same action happen each time a new guy enters the ring is kind of forgiveable. The weaponshigh spots were what the match was about as well as Flair obviously blading! The AJ run in, well OK so sentimentally it was a nice spot but really doesn’t that mean the face team cheated? Hardy is clutching his arm and the replay of Danielson jumping from the cage does seem to show him taking 90% of the move whilst Abyss falls over as an afterthought.

Overall I’ve no really hard complaints other than the world title match which proved that a double DQ finish at ‘Mania can be beaten in terms of failing to live up to promise. If Sting is struggling in ring then why is he wearing the belt? If he’s not then why was this match over in the blink of an eye? Why put us through Ken Anderson shouting his way through every Impact when he basically got mugged for 80% of the match? Is anyone really that pumped to see Sting V Hogan for the billionth time except this time both me might crumble if they hit each other too hard? Fine if so but don’t make it about the title. 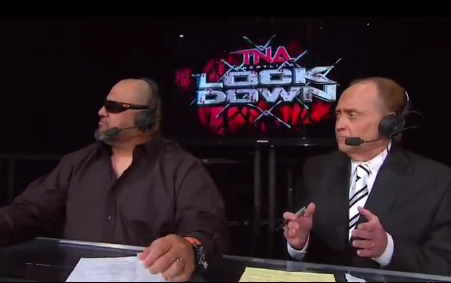 Tenay’s face pretty much tells you all you need to know about this PPV/.

Pope V Joe for me was the MOTN and personally I enjoyed the main event for what it was. Most everything else was Middling to Poor which brings me back to the question I put at the start. If TNA end up bringing us a program that plateaus at a “Meh” stage then who really wants to tune into that?  TNA needs to become a proper wrestling promotion again and not allow the writers to turn it into a badly acted TV show in tights.  Oh and if it wasn’t already obvious they need to get on the road more because the Impact Zone looks and sounds like a morgue compared to a crowd who has actually come to see a wrestling show.