So once again we come back to Mick Foley, the man who basically invented the genre of wrestling autobiographies. His newest memoir is titled ‘Countdown to Lockdown’ and is essentially that; a countdown of the days leading up to the 2009 Lockdown Pay-Per-View where he won the TNA World Heavyweight Championship. His first two books are seen as classics by most people, but his previous book, ‘The Hardcore Diaries’ met with some backlash from the fans. Where will ‘Countdown to Lockdown’ fall? 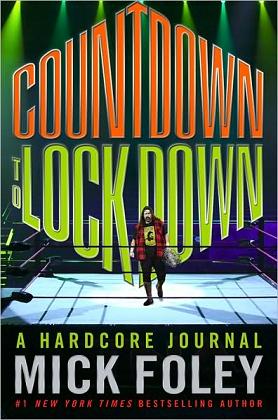 One may wonder why exactly does Mick Foley need another autobiography – I know I did. Mick’s answer to this is to not think of it as an autobiography but rather as an account of an adventure in his life. I can buy that, if only because he’s talking about TNA which hasn’t had much exposure in books. The book is divided into two parts, one being his ‘Countdown to Lockdown’, written in diary format similar to ‘The Hardcore Diaries’. The other part is a more traditional autobiography, dealing with a collection of random topics ranging from the Chris Benoit tragedy to meeting pianist Tori Amos. The most interesting chapters are the ones that deal with his fall out with the McMahons and WWE, thought they do come off as anti-climactic.

I’ve made it clear in the past that I’m not really a huge fan of Mick Foley’s writing but there are some characteristics that I do enjoy. Foley has great charisma and is quite witty which is always prevalent in his work. Foley will also never sugar coat something that happened to him in the ring, which does tend to happen in a lot of other wrestling autobiographies. Having the name “The Hardcore Legend” you can be sure there are some hauntingly graphic and extremely hard to read descriptions about injuries. While they are tough to read, you will appreciate that he is being honest with you.

But there are two issues that hang over this book which prevent me from liking it. The first is this – it lacks immersion. I firmly believe that being immersed in something is an important factor in really enjoying it. One challenge for immersion is that you need to forget that you are sitting there reading a book and really be hooked on the readers words. Mick Foley constantly addresses the reader, which occasionally is good for comedic purposes but in excess is just distracting. His interaction with the reader does make the book accessible, but it constantly draws attention to the fact that it is a book. When a medium draws attention to itself rather than the story it’s telling I’ve found it’s easier for the mind to wander and not really be focused. My second problem is this. Mick Foley has not now nor has he ever been a good writer.

Don’t get me wrong, he is an engaging writer, an interesting writer and a funny writer but not a good writer. Now, I’m not really one to talk; none of my book reviews are going to be submitted to Library of Congress. But after four autobiographies and a number of other novels there are just some traits that can’t be excused. Foley will never use a single word when a paragraph will work, so at times it can become tedious. He also tends to lose focus in chapters, going off on random tangents constantly; the diary entries being notable examples of this. All non-diary chapters have a “wrestle-meter” which tells the reader on an utterly arbitrary scale just how much the chapter is related to wrestling. Some chapters have nothing to do with wrestling and one chapter has the caption of “Go ahead, skip it”. His explanation is that non wrestling fans might not want to wade through wrestle-heavy chapters and wrestling fans might not want to read chapters irrelevant to wrestling. But it’s ridiculous that he thought at one point that not reading the book was a point in its favour.

‘Countdown to Lockdown’ is an improvement on ‘Hardcore Diaries’, but not as good as his first two books. It’s nice to have a look at the inner workings of TNA which hasn’t really happened except in that atrocity Vince Russo wrote, ‘Rope Opera’. It’s a typical unfocused, verbose Foley book, but then again those are selling points for his autobiographies. If you enjoyed his previous books you’ll like this.