Since 1993, Monday Night RAW has delivered non-stop thrills, action and controversy to the WWE Universe. Now, after hitting 1,000 episodes, WWE counts down the definitive 100 moments of the longest-running, weekly episodic programme in US TV history. Fans of all eras can enjoy the most memorable exploits of all their favourite WWE heroes… 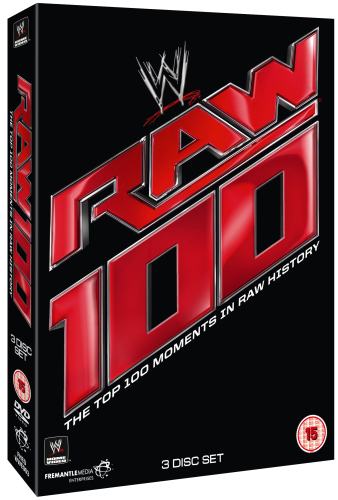 As the title suggests, this is a countdown of the Top 100 Raw moments (plus some extra moments on Disc 2) since the show began in 1993.

There is no presenter for the set. Instead each entry has a smattering of talking heads discussing the reasoning and the history behind the skit / match / whatever and for the most part they do a good job. Interestingly, one of the talking heads is Matt Hardy.

With any list, you’re going to find moments included that baffle you and one or two of your own personal favourites not making the cut, but for the most part this is a relevant countdown that takes in the serious, the funny, the emotional and the totally off-the wall.

For once, WWE do a countdown list and don’t make a hash of it and rather than list a few of the highlights (you’ll probably guess the majority of them), I’ve kept this review brief so as to allow you to discover the list for yourself.

Disc 2 has a seven-minute run of six extra moments and Disc 3 is the entire show for the 1000th episode of the show, as well as a nice bonus on the making of this historic milestone.

This is a great collection of moments that will have more than a few of us going “oh, yeah, that was cool” as you work through the list.

The talking heads work and it was nice to see Matt Hardy looking healthy too, while having the entire RAW 1000th episode and the making of said event is the icing on the cake.

If you go for the Blu-Ray, you get another six moments and a 90min Legend Roundtable discussion on the history of Monday Night RAW.