Twice a year, usually April and November, the WWE come to the UK as part of their European tour. The highlight of this run through our fair land are the RAW and Smackdown tapings that take place, with the British fans getting a reward for their loyalty over the last three decades.

For the last three years, WWE has released these tapings on a special UK-only release, along with recordings of Superstars, NXT and, until it went under, ECW. Now, as the WWE gear themselves up and look ahead to WrestleMania and the April 2011 tour, it’s time to take a look back at what went down in November of last year. 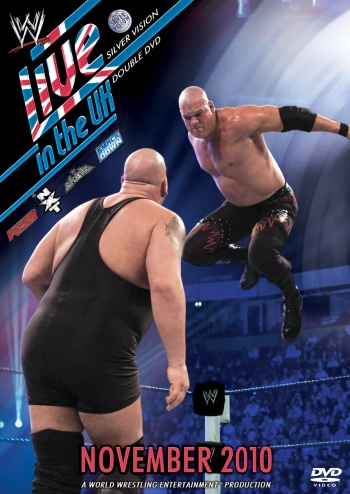 Seeing as this is simply the RAW, Smackdown, NXT and Superstars television broadcasts, most of the people reading this review will have already seen them. The same argument can be made for the PPV releases, but it’s virtually unheard of to release a single episode of the weekly televised wrestling show for the DVD market. Of course, these are no ordinary shows… these are the “Live in the UK” broadcasts.

The above is the standard opening for all the “Live in the UK” releases.

The highlight of the show is easily Santino’s tea party with Sheamus and Koslov. The big Russian shows a hitherto unseen level of comic timing and his straight man to Marella’s hilariously OTT Italian is something to behold. Match-wise, Harts/Usos and (surprisingly) Goldust/DiBiase are good, while the 10-man main-event is at least epic in scale and has a hot finish, even if it is the usual every-guy-hitting-a-big-move sequence WWE do so well (look out for Garbiel’s awesome superkick). The match also shows that there is no-one better than Randy Orton when it comes to physical psychology inside a wrestling ring.

As a show in the grand scheme of things, this RAW was pretty much a nothing event, but the UK crowd really add a lot to proceedings. Nexus are still trying to recover from the Summerslam debacle, but the addition of John Cena (albeit forced) helped. The only problem is, and it’s been said many times before, is that Cena should never have been allowed out to his own music and wearing his own merch.

On a side note, the Stand Up for WWE videos got to be a little sickening, but the one on this show was pretty cool as it focused on all the current second/third-generation stars on the roster and to hear them talk about their ancestors is always going to be worth a watch.

Season 3 of NXT focused on the ladies and, almost from day one, was treated like a joke, even though, for the most part, the women actually came across better than the men did in the previous two seasons.

That being said though, there’s virtually nothing worth watching again here (apart from the aesthetic appeal of Kaitlyn, and AJ  – unfortunately, in this regard, Maxine was eliminated the week before) and you should only press play if you missed the show first time around.

Three matches on a show that runs for 36mins, but as it’s Superstars, there’s no outside shenanigans to deal with and the bouts themselves are the sole focus outside two short video packages. Ryder/Tatsu (SHINING WIZAAAAAARD!!!)  is decent, Big Zeke squashing people will never get old and the main-event is fantastic as Drew McIntyre (a guy who I know from experience has worked incredibly hard to get where he is today) takes on Kaval in a Smackdown show-closer. Given just over 10mins, they really put on  TV-level clinic. Look out for Kaval’s wheel kick from the floor as Drew is on the ringsteps.

As Smackdown was in the midst of the risible Kane/Edge feud, the insulting Paul Bearer storyline was in full swing and that alone is almost enough to give the show a miss. However, if you did that, you’d miss out on the great Ziggler/MVP and Alberto/Kofi matches.

Those two bouts continue the Smackdown tradition of superior in-ring showings from WWE superstars and the Edge/Otunga Lumberjack Match is a decent spectacle as well. On the female side of the fence, Natalya and Layla have a fun contest (Layla is so underrated as a character), while the main-event isn’t as bad as it could be.

Promo wise, Kane and Cody Rhodes are on fire, with the latter’s “Dashing” character being a revelation following on from the “Default CAW” Cody Rhodes we were used to.

Even though Smackdown is a two-hour show, with the ads taken out, we’re left with a 1hr 20mins broadcast, meaning it whizzes by quicker than you’d first expect. Because of the crappy angle between Kane and Edge, that’s actually a good thing,.

Only one extra, but it’s quite a curio to say the least. From the UK only PPV, the match against Undertaker and Kane looks, from a production standpoint, like it was filmed at an untelevised house show, particularly with the camera angles used.

It’s also interesting to note that Undertaker is fighting in street clothes. This was due to a mix-up at the airport and his luggage going missing, leaving him to either wrestle in what he was wearing or no-show the match. As he chose the former, he’s essentially the American Bad-Ass version of the Undertaker two years before the character officially debuted.

Unfortunately, that’s the only interesting thing about things as the match absolutely sucks and is over in double-quick time. Considering how well they did against each other at WrestleMania only the week before, it’s, to be blunt, an insult to serve up this on a show laughably referred to as a PPV quality card.

As I have mentioned in previous “Live from…” reviews, if you were at the events, this is a great reminder of your time at a televised WWE event. For the rest of us who watched them when they first aired, it’s not as essential a purchase.

Another part of these collections that I have mentioned with each release is the fact that all commercial breaks are included as well. The cameras are obviously rolling during these breaks (how else would we get the replays of what happened during them?), so it can’t be hard to include the footage in a DVD release that is put out months after the initial airing.

Not really as worthy a purchase as the last “Live in the UK” set, I’d only get this is you need to own all WWE DVDs, if you were there or you can get it for less than a tenner.