Seeing as this is simply the RAW, Smackdown, ECW and Superstars television broadcasts, most of the people reading this review will have already seen them. The same argument can be made for the PPV releases, but it’s virtually unheard of to release a single episode of the weekly televised wrestling show for the DVD market. Of course, these are no ordinary shows… these are the “Live in the UK” broadcasts. 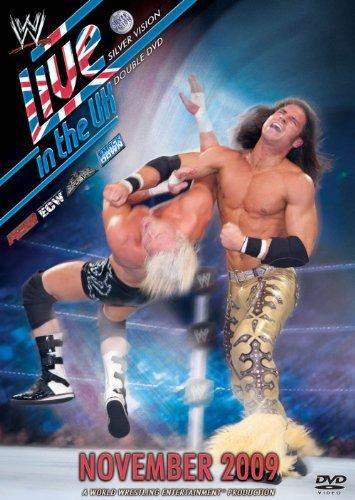 Ricky Hatton was a horrible Guest Host, completely monotone and out of his depth, with an accent that grates every second you hear it. Add in his ridiculous “match” with Chavo Guerrero and you have the makings of a lousy episode of RAW.

Not helping Ricky was the fact the show lacked any matches that meant anything in the grand scheme of things. Sure, the main-event of JeriShow v DX was important, but nothing else on the broadcast can lay claim to the same honour. Kelly Kelly v Alicia Fox is decent enough (and Fox’s Ax-Kick finisher is astoundingly brutal looking), Sheamus squashes a nobody, Evan Bourne v Jack Swagger is given around 3mins (when, if given time, they could put something really good together) and Orton/Henry suffers from shortness as well at only 5mins.

Out of all six matches on the show, only the main-event tag gets any sort of length given to it (and even that only amounts to 10mins), meaning it’s easily the best part of this episode of RAW. Cena on commentary (he would be facing both members of DX at the upcoming Survivor Series PPV) adds an extra dimension and the action is kept pretty brisk.

The segments on the show are a mixed bag. The opening (apart from Hatton’s input) is pretty good and the VIP Lounge has its moments also. The Bellas do their usual pimping of themselves to the guest host skit, which is harmless enough, but the segment where John Cena hides Hornswoggle is embarrassingly bad.

The closing of the show is actually really fantastic, as the main event for the following week’s RAW is revealed. It left you feeling excited, even after watching a poor show for almost the entire show beforehand… and that’s what a cliffhanger ending is supposed to do, so congratulations on a job well done, WWE.

Because of it’s shorter length, ECW rarely suffers from as much “crap segment” overkill as RAW. Another thing ECW seems to have over its red-coloured cousin is that, for the most part, the matches are rarely less than good. Burchill v Goldust is decent enough, Vance Archer squashing people was designed to get him over (and it was working until ECW had the plug pulled) and the main event championship match is really good. Christian and Regal just work well together and I don’t think they’ve had a bad match when facing each other (Summerslam doesn’t count), so giving them 15mins to show what they can do (and, trust me, they go through pretty much everything) was a smart move.

The segments are also pretty good. The Abraham Washington Show just works (Tony Atlas laughing is hilarious), Tiffany is perfect in her role as GM and the Zack Ryder character was evolving into a dependable member of the roster… again, until ECW was cancelled.

For the longest time, Smackdown has been keeping the WWE goodwill running. Consistent angles, good-to-great wrestling and less of the “comedy” shenanigans that blight RAW mean it’s been the best televised wrestling show of the past year.

The matches are all decent enough; CM Punk and R-Truth is a good opener, Morrison v Ziggler continues their strong run for the IC Title, Mickie v Natalya showcased two of the best female wrestlers in the company (if only the pathetic “Piggie James” stuff could be erased from history), Beth’s squash was perfect as the company continued to re-introduce her to the masses, McIntyre v Finlay was just two guys clubberin’ each other and, of course, Jericho v Undertaker was the match of the night.

Punk’s diatribe to open the show was stunningly good. The Straight Edge Society had yet to come to fruition, but the seeds for that aspect of his character were being sown here. It’s a master-class in working an audience and a joy to watch someone cut a promo who knows exactly what he’s doing.

The other main segment on the show is the contract signing between Batista and Rey Mysterio. This angle works because it’s incredibly believable. It’s a known fact that both men were legitimate friends in real life as well as on-screen, so to see it blow up like this adds an extra slice of emotion that elevates it from simply good to being great.

Closing the show, Jericho v Undertaker was a great encounter with a good 15mins of back-and-forth action and a nice finish to close the show.

Basically a harking back to the days of the B-show, Superstars features midcard matches from the other three (now two) brands. They’re all pretty good and are given enough time to develop enough to tell a story. Matt v Smith is a nice opener, Shelton/Ryder is a belter of a TV match and, to close us out, MVP and Ted DiBiase get 10mins to show us what they have in front of a red-hot UK crowd.

The “Ask the Divas” segment is inoffensive and worth a watch… but just the once.

Two full matches as extras is not something to be sniffed at, even if one of them is simply a decent Battle Royal. The one thing that strikes me is that, for a nothing Battle Royal on a glorified UK house show (the event was never televised), the ring is absolutely jam-packed with big name wrestlers of the era.

I mean, look at this list of entrants – The Undertaker, British Bulldog, Roddy Piper, The Nasty Boys, The Legion of Doom, The Natural Disasters, The Rockers, Power & Glory, Ric Flair, Roddy Piper, Jim Duggan, The Big Bossman, The Mountie, The Barbarian, Tito Santana and The Texas Tornado. That’s quite a cross-section of the WWF roster from that time period (and yes, I am aware that there were TWENTY-ONE wrestlers in this 20-Man Battle Royal) and the fans inside the Albert Hall loved ever single second of it. Also, watch out for a nice Andre the Giant cameo appearance at the end.

The other match is a bonus feature on disc 2 and is taken from the Rebellion UK-only PPV that was held on October 26th, 2002 and features Edge challenging for the WWE Championship in a Handicap Match against Brock Lesnar and Paul Heyman. It’s a nice look back at two guys who are sorely missed in today’s wrestling world in Heyman and Lesnar and the fact the match gets over 20mins is fantastic.

The fans are up for it, the action is great, Heyman is perfect as the slimy coward, Brock is just a beast (no pretending required) and Edge was getting set to break the glass ceiling, so all the elements clicked into place and gave us a really well laid out main-event for a UK-exclusive event.

Rounding out the extras, we have a one-minute look at the tour with some of the wrestlers chiming in on their thoughts on the European fans. This is worth watching just to hear how Santino Marella pronounces Scotland.

As I have mentioned in previous “Live from…” reviews, if you were at the events live, this is a great reminder of your time at a televised WWE event. For the rest of us who watched them when they first aired, it’s not as essential a purchase. Another part of these collections that I have mentioned with each release is the fact that all commercial breaks are included as well. The cameras are obviously rolling during these breaks (how else would we get the replays of what happened during them?), so it can’t be hard to include the footage in a DVD release that is put out months after the initial airing.

This isn’t a great collection. Sure, some of the matches are worth viewing again and CM Punk’s promo to open Smackdown is a work of genius, but there’s just something lacking in a no-frills DVD release of television shows that we’ve already seen and have no real desire to relive.

The extras are of a better quality than we usually get from WWE DVD releases, so that adds a point to the review score, as does the fact you can pick it up for around £10 (Shopzone has it for £10.99), but I can only recommend it if you wish to own all WWE releases or you were there and want a souvenir.