Seeing as this is simply the RAW, Smackdown, NXT and Superstars television broadcasts, most of the people reading this review will have already seen them. The same argument can be made for the PPV releases, but it’s virtually unheard of to release a single episode of the weekly televised wrestling show for the DVD market. Of course, these are no ordinary shows… these are the “Live in the UK” broadcasts. 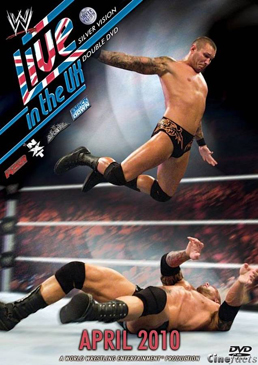 The Hoff was, in my opinion, a great guest host and coming out driving KITT gave me an awesomely nostalgic feeling. Maryse (looking as hot as ever) being out for the first match gave me, um, a different feeling, but this episode of RAW was off to a flying start.

The goodness continues with Miz and Big Show being challenged by Bret Hart and The Hart Dynasty. The following match was pretty decent too and led into a rather good episode of RAW, much better than the travesty of the Ricky Hatton-hosted UK episode that preceded it.

The matches are worth watching for various reasons (the Six-Diva one mostly for the aesthetics), with Sheamus/Kofi and Batista/Orton shining out from the pack. Cena’s burial of Otunga was a shame, but it’s only David Otunga, so who cares? Anyway, Otunga is doing pretty well for himself these days, so it didn’t harm his prospects in the long run.

The skits and promos were mostly good too, with Miz and Bret’s back-and-forth being a highlight. Oh, and Air Bourne is still one of the most impressive looking high-flying moves I’ve ever seen; it’s just so graceful and Evan makes it look so effortless.

The most interesting aspect of rewatching this episode on NXT is knowing where they all end up less than six-months later; in the headline feud on RAW as a cohesive unit known as Nexus.

Opening the show with one of the ridiculous challenges isn’t the best idea, especially when it’s as stupid as the “Talk the Talk” challenge. It gets even more ludicrous when you consider that the challenge takes up pretty much the ENTIRE first half of the broadcast.

Thankfully, the second half picks up the ball and runs with it… all the way to the end-zone for a touchdown. Beginning with the moment Darren Young shoved his mentor, CM Punk, on his arse on Smackdown, the last 20mins of NXT feature three really good matches, with Regal/Bryan being one of the best bouts the first series of NXT ever booked. The backstage segments with Young/Punk and Miz/Bryan are great (especially the latter) and really compliment the matches they promoted.

NXT was literally a game of two halves.

Superstars is comprised of three midcard matches from RAW and Smackdown. The show itself is just over 30mins long in total, so none of the bouts get any great length of time, but they’re decent enough, with Christian v Chavo being the stand-out (mainly due to the Guerrero burial not being in effect on the B-level show).

The “Ask the Divas” segment should be skipped though, if only to save yourself from Gail Kim’s singing.

Smackdown opens with a great promo as Chris Jericho vents his frustration at losing the World Championship to Jack Swagger after Jack cashed in his “Money in the Bank” opportunity (the last to be one at Wrestlemania?) to take the title from the Canadian. Edge comes out and the main event for the show is set up.

Six matches take place on Smackdown and as it runs just over 77mins, that’s a lot of action crammed into just over an hour (on a side note, just how many adverts are there on Smackdown?), with some little backstage skits filling out the rest of the broadcast.

Of the bouts, Kane/McIntyre is alright (I’m biased when it comes to Drew, due to him being an old friend of mine from back in our BCW days), Ziggler/Truth (with the building up of Dolph’s sleeper going strong), McCool/James and JTG v Croft are decent enough, the six-man is really good and the three-way to close the show isn’t as entertaining as it could’ve been, but it’s still a good match.

All in all, it’s a short show, but it’s worth watching again.

Like the previous collection, each disc contains a bonus match from an old WWF show from the UK. The first disc has an absolute blinder of a tag match between The Rockers and The Fabulous Rougeaus that goes around 25mins and features awesome action and great psychology from both teams and takes place in front of a red hot 1989 crowd. Both teams compliment each other, there’s a great piledriver and that leads to a great finish that shows perfectly how a face can cheat and get away with it if the heel tried to do it first.

The second bonus match is from 1992 and is Bret Hart taking on Rick Martel for the WWF Intercontinental Championship. Taking place just after WrestleMania VIII, this is a great technical battle for a title that used to be worth so much more than it is today. Sean Mooney conducting a backstage interview with “The Model” beforehand is just the icing on the cake. The cake itself? Well that’s having commentary from Gorilla Monsoon and Bobby Heenan.

As I have mentioned in previous “Live from…” reviews, if you were at the events live, this is a great reminder of your time at a televised WWE event. For the rest of us who watched them when they first aired, it’s not as essential a purchase. Another part of these collections that I have mentioned with each release is the fact that all commercial breaks are included as well. The cameras are obviously rolling during these breaks (how else would we get the replays of what happened during them?), so it can’t be hard to include the footage in a DVD release that is put out months after the initial airing.

A much better set than the previous collection, this is worth purchasing if you can get it for a decent price. The extras are well worth owning it for however, especially if you’re a fan of old-school WWF action.