WWE, rather fairly, has a reputation as dismissing the lighter wrestler, the aerial artist, as nothing more than a card-filler, someone who nobody really cares about and is too small to make a name in the wrestling business. With that in mind, it’s somewhat surprising that the company would release a three-disc DVD collection devoted to those very athletes.

Most of the people featured on this disc were mid-card acts at best, but inside the ring, they could excite a crowd like nobody else. Shawn Michaels, Ricky Steamboat, Brian Pillman, The 1-2-3 Kid, Rey Mysterio, La Parka and a host of others get their moment to shine… and they don’t disappoint.

Over 6hrs of action from WWE, WCW, ECW and Japan showcase the reason why the WCW Cruiserweight Division is so fondly remembered, so let World Wrestling Entertainment take you for a trip down Top Rope Memory Lane. 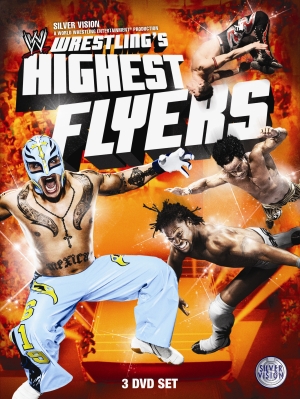 First of all, it needs to be said that if you’re looking for the definitive collection of wrestling’s high-flying greats, then you’re going to have to keep looking. There’s no Dragon Gate, no Super Junior action, nothing from the the great land of Mexico (although the WCW six-man is of that style) and a fair bit of the WCW cruiserweight greats overlooked as well. With that out of the way, what we do have is a cross-section of WWE’s selection of high-flyers and an array of matches (one for each guy) that range from the “been on every DVD set going” to rarely seen gems.

Our host for the duration is the ever dependable Josh Mathews, who’s main positive is that he’s not Michael Cole, a guy who ruins the links of any DVD he fronts. Josh comes across as enthusiastic as he hypes each man in turn before a vignette plays to showcase their talents and, finally, we have a match to savour each individual’s talents.

It’s a formula that’s followed pretty much throughout, with exceptions made for different styles of flyer (WWE light-heavyweights, WCW Cruisers, tag-teams, modern day, etc) and it works very well for this type of DVD. Obvious omissions aside (and we’ll all have someone we’re stunned isn’t featured – Dynamite Kid and The Rockers are two for me), those who are on show are hard to argue with their inclusion… depending on your description of what a high-flyer is. Me? I’m working on the fact it’s a WWE DVD, so I’m basing high-flying on what the WWE consider to be high-flying for the duration of the three discs.

Bookended by  Ricky Steamboat taking on Brian Pillman (with a finishing sequence that has become a staple lighter-wrestler-near-fall-sequence) and Rey Mysterio v Eddie Guerrero (the infamous Halloween Havoc match that is on both Rey and Eddie’s DVD releases), we have good-to-great bouts from WCW, ECW and WWE, with the rarely seen Hakushi v 1-2-3 Kid from SummerSlam 1995 being an unexpected highlight for this reviewer.

Some of the choices do baffle however. I mean, I’m sure that they could have picked a better match for Evan Bourne, Brian Pillman (the opener is Steamboat’s showcase) and John Morrison, while the match between HBK and Vader is decent enough, there are literally dozens of better examples to show off the aerial talents of Michaels. Plucking Van Dam v Sabu from Guilty as Charged 2000 (which made me nostalgic for ECW and reignited my hope that WWE will release the ECW back catalogue at some point, which, to be fair, is also what I felt when watching the classic WCW Cruiserweight action too) does score some favourable points though, so all is not lost.

The Sky-Cam sections are interesting in that, as the name suggests, a camera is attached to the wrestler featured and we get to see from their point-of-view what it’s like to fly through the air. It’s a nice addition to an already loaded package.

Four complete matches and two segments are the extras my dreams are made of. Rather than the obligatory thirty-second “interview” backstage, this lot actually lives up the title of extra features. The four bouts are never less than good, with the Kidman v Juventud being a forgotten gem.

Taken as a collection of great matches from over the years rather than what the title suggests, this is a fantastic set of bouts from WCW, ECW, WWE and the lone match from Japan. Mixing well known matches with those few will have seen, WWE hit the right note pretty much throughout.

A good amount of extras are the icing on the cake and this is the first essential purchase of 2011.

Points: 8/10 (it would have been higher, but some of the match choices aren’t quite right)