The feature starts with a match from one of the greatest Pay-Per-Views in history; When Worlds Collide. The show was a AAA show promoted in conjuction with WCW (hence the title) and was a massive success. The six-man tag features a 19yo Rey Mysterio, Jr. (who had been wrestling for five years at this point) in his PPV debut and is a fantastic match to start us off with, even if the finish is a bit flat compared to the rest of the bout. 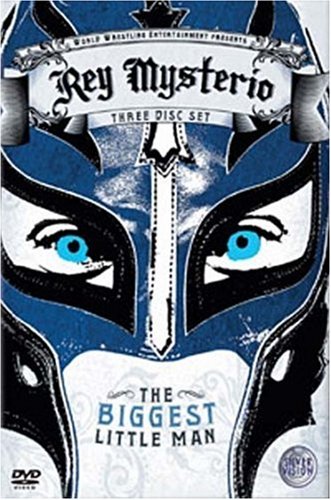 From there, we go to ECW, my all-time favourite promotion, for a couple of very entertaining bouts against Psicosis and Juventud Guerrero. The style of Lucha Libre had never really been pushed in the United States, so to see these guys throw themselves around, as well as leaping and jumping, especially at such a speed, was a joy to behold. What also adds to the occasion is having Joey Styles putting the effort in. For those who have only seen Joey comment on WWE’s version of ECW, this is a wake-up call to how good he used to be.

All three men went on to bigger and better things in WCW, but it’s always good to see where their US journeys began.

Rey and Dean had a fantastic match at the Great American Bash and it was the perfect start to his WCW career. Following on from that contest, we have another belter with Malenko on Nitro and then watch Rey in action against Ultimate Dragon (Ultimo Dragon, WCW mistranslated his name), Super Calo and Dean-o Machin-o.

Rey then discusses his goal as a WCW cruiserweight before introducing the next match, Rey Mysterio v Jushin Liger. In 1996, there probably wasn’t a better cruiserweight wrestler on the planer than Liger. Rey v Liger is a phenomenal match (possibly the highlight of the first disc, and is a great advert for what non-heavyweight wrestling should be.

The first disc closes with another match against Ultimo Dragon that is an improvement on the previous encounter.

Disc 2 begins with Mysterio talking about how wrestling was (an still is) perceived as a “big man” sport but how he and the other cruiserweights didn’t let their (lack of) size slow them down. The first match on the second disc is an absolute classic against (a newly turned heel) Eddie Guerrero. It doesn’t say so in the chapters listing, but the match is a title v mask match, which adds to the hype and tension surrounding the bout.

A rematch with Eddie and another match against Juventud Guerrera (both matches maintain the form shown thus far) lead us into a quick talk from Rey on how the cruiserweights raised the bar for professional wrestling all across the world.

A match against a pre-Y2J Chris Jericho is up next, and this, like all the matches so far, is a great example of creating excitement between the ropes. It also helps that this was the peak of Chris Jericho’s heel persona, with “Loophole” Chris Jericho in full flow at this point in time.

Yet another match against Psicosis is followed by a stunner against Blitzkreig on Nitro. Blitzkreig was only around for a short time, but he made a distinct impression almost immediately. It’s a crying shame he didn’t have a longer career, because the guy was an amazing talent inside the ring.

Due to the next stage of Rey’s career having him unmasked, WWE omit his entire feud with with the nWo, including his clean win over Kevin Nash (which would have been the perfect match to show the world that size doesn’t matter), and his run with The Filthy Animals (which included his ill-advised heel turn). Instead, we have Rey talking about his arrival in WWE (and lying about deciding to leave WCW. Rey stayed until the death of the company and won the Cruiserweight Tag Team Titles on the last ever WCW show) and his debut match on Smackdown! against old enemy, Chavo Guerrero.

Kurt Angle is the next roadblock to face Rey Mysterio, with Kurt Angle focusing on Rey’s size as the reason why he doesn’t belong in the same ring as an Olympic gold medal winner. The feud also featured two great lines from Angle, one before their Summerslam match and one after.

“You need to be this high to wrestle Kurt Angle” – as Kurt holds his hands to his chest.

“I lost to a freakin’ twelve year old” – Kurt’s response to losing at Summerslam.

Some nice matches follow against Matt Hardy, Tajiri and Chavo, but they can’t match the action from the previous matches in ECW and (especially) WCW. Whether that was because of a more restrictive environment or wear and tear on the part of Rey is a matter of debate. I would way say it’s a combination of both.

We kick of disc 3 with Rey talking about the pride he felt in teaming up with Eddie Guerrero and becoming the WWE Tag Team Champions alongside him. This was just after the best period of tag team wrestling in the post-TLC era; the “Smackdown! Six” Era, where the teams of Rey & Edge, Kurt Angle & Chris Benoit and Los Guerreros (Chavo & Eddie) were all on fire as they feuded for the newly created titles.

The team of Eddie and Rey did very well together, but the cracks began to appear when they had some matches that were meant to be friendly competition to find out who was the better man inside the ring. Their match at Wrestlemania is omitted (it was a mild disappointment considering the talent of both men), as is their ladder match at Summerslam (a great match, marred by the whole Dominic stipulation). I assume WWE left out the entire Dominic storyline so as not to tarnish the memory Guerrero; it was a wise decision.

Eddie Guerrero died in November 2005, causing an outpouring of grief not seen since Owen Hart died six years earlier. In fact, I’d say the grief shown for the passing of Eddie surpassed that of Owen (with no disrespect intended), as it seemed to affect more people worldwide, even those who had never met the man in person.

I had met Eddie briefly during his hiatus from WWE (for drug addiction), which doesn’t mean much in the grand scheme of things, but I can’t watch the “Hurt” tribute video without shedding a tear. With that in mind, imagine how Rey, one of Eddie’s best friends, must have felt during the Eddie Guerrero Tribute edition of RAW. His match with Shawn Michaels was very good considering the circumstances surrounding it, with both men really going for it.

The remainder of the disc covers his historic World Title win at Wrestlemania 22 (smallest and lightest champion in WWE history), his feud with JBL and ends with a pair of stipulation matches against persistent nemesis, Chavo Guerrero. The first bout, a Falls Count Anywhere match, is good, but the following “I Quit” match is better.

The latter was Rey’s final match before he underwent the knee surgery that kept him out for almost ten months, but as Rey says at the end of the DVD, the best of Rey Mysterio is still to come.

There are no extras whatsoever on any of the three discs. This is a travesty, particularly because there is a wealth of match footage that has been overlooked in the main feature, not to mention it would have been nice to actually find out about the man himself away from the ring.

Even a music video from P.O.D. would have been something.

This feature is similar to the Steve Austin DVD I reviewed last time out; it’s basically all matches with a small smattering of discussion to explain the background to some of them. It’s a shame really, because Rey’s story is a good one to watch unfold, especially his fight to overcome his size in his professional life. I’m also sure there could have been something, anything about the man under the mask.

To most of us old enough to remember the Monday Night Wars, the cruiserweight division in WCW was a highlight. Eric Bischoff, for all his faults, was smart enough to push the cruiserweights and let them run riot on Nitro. They usually started the show off, which was a masterstroke in itself, and the matches on this set shows the world how good cruiserweight wrestling can be done in the United States.

It’s just a pity Vince McMahon doesn’t pay heed to the action in his video library and allow his crop of lighter wrestlers a chance to shine like only they can.

For those looking to learn more about Oscar Gutierrez, the man behind the mask, this release is not for you, but if you want to have a collection of exciting matches featuring the some of the best matches in cruiserweight wrestling, then this three-disc set cannot come any more highly recommended.