WWE Intercontinental Title Belts: A Guide to the Gold

By The Beltster
WWE Blogs

As many of you will know I’ve been a huge fan of championship belts since I first started watching the World Wrestling Federation in 1983. All the belts throughout the years have grabbed my attention in one way or another.  Obviously, the heavyweight championship is most memorable due to its status however the Intercontinental title has had an illustrious history of its own.

Back in 1979, before I was a fan, Pat Patterson was booked to ‘win’ the newly created WWWF Intercontinental championship in a fictional tournament in Rio de Janeiro. The original belt was made of trophy shop metal, very thin and flimsy much like all belts at that time. It was attached to the leather by rivets which were the standard of the time. The belt was on a red strap:

This specific title belt lasted for over 5 years and was held by Patterson, Ken Patera, Pedro Morales and Don Muraco. Once the championship was won by Tito Santana, it was replaced. Once again, the new championship belt was constructed using trophy shop thin metal as this was still the standard of the era, but the new acid-etched belts were slowly creeping in and this would be the last trophy shop metal belt used in the WWF and it also wouldn’t last long.

This belt was only held by Tito Santana and Greg Valentine: 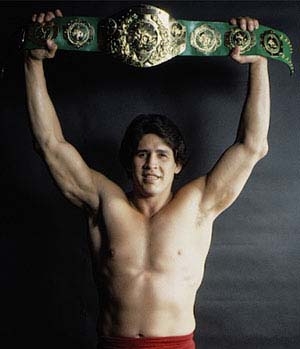 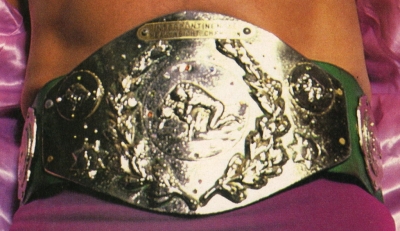 In 1986, the Intercontinental title belt was replaced by probably the most memorable version of the belt ever used. Made using the acid etching process, the belt was made by Reggie Parks who had taken over making the belts for all the major promotions in North America. It was a gold plated belt, 5 plates on hand-tooled black leather. More commonly referred to as the ‘Reggie IC’ among collectors and belt enthusiasts, this belt is likely the 2nd most popular belt of all time behind the WWF ‘Winged Eagle’ title belt. Reggie Parks and Dave Millican probably get more orders from belt collectors for these two belts than any other.

The original Reggie IC had no tooling pattern on the strap, all 4 side plates were the same size and the WWF logo on the main plate was etched and filled with red paint: 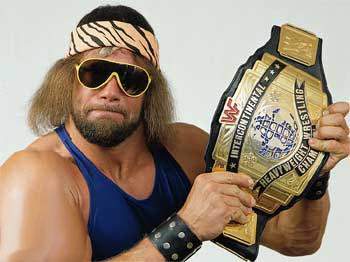 Once Randy Savage won the strap from Tito, he used Brasso polish on the belt which removed all the gold plating and ruined the belt. The belt looked awful with horribly tarnished plates. This was switched in 1988 with a new version of the same design.

In 1988, while the Honky Tonk Man was in the midst of his record-setting reign with the strap, it was replaced. It was still the Reggie IC but there were some minor differences. The strap now had a sea shell tooling pattern on it, the outer side plates were slightly smaller than the inner side plates, it had a thin logo plate at one end and the WWF logo on the main plate was no longer etched, but was now raised and no longer red. Also during this time, a gold tip was added to the end of the strap to match the WWF world and tag titles of the time 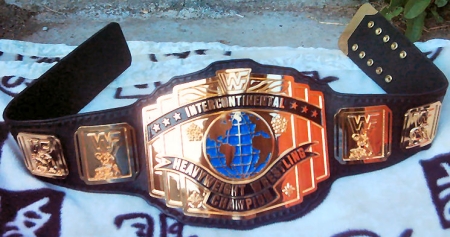 This belt was used during the Hulkamania golden age of the World Wrestling Federation and this was when it enjoyed its most success, classed as the ‘workers title’, many great matches were fought over this championship. Holding the Intercontinental title at that time really meant something.

Throughout its run, the Reggie IC was presented on TV on various colour straps. The Ultimate Warrior was the first superstar to have it on a different colour when he debuted it in yellow during late 1989, this lasted until WrestleMania VI in April 1990 when he unified the WWF World and Intercontinental titles and was subsequently stripped of the Intercontinental title, which soon reverted to black.

Here is the yellow version:

As different guys held the belt, it was shown on more colour straps, here are all of them in the order they were presented on TV: 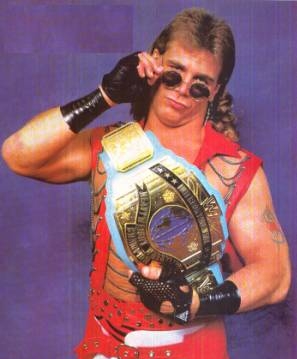 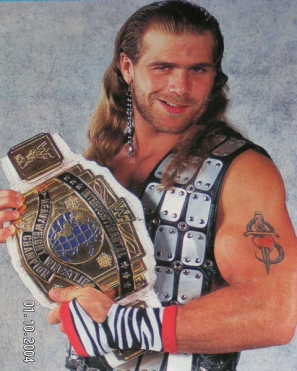 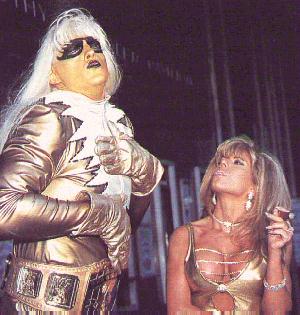 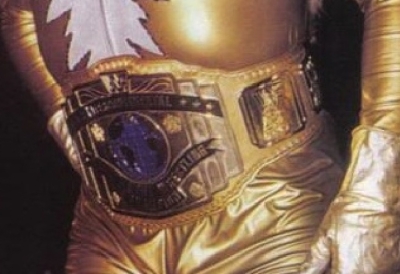 In March 1998, the night after WrestleMania 14 on RAW, the Rock debuted the new Intercontinental title belt. After 12 years on TV, the Reggie IC was retired; the new belt was made by J-Mar after Vince ended his agreement with Reggie Parks to make him his belts.

The WWF wanted to own the rights to their title belt designs, Reggie owned the artwork for the ones they had been using and refused to sign the rights over to Vince McMahon. The WWF then began designing belts in-house with the help of J-Mar.

The new Intercontinental title belt was rounder in shape, still with the WWF block logo. It had a logo plate, purple strap and no gold tip: 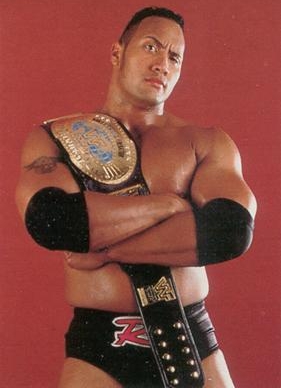 At some point in late 1998, the strap had turned black from all the sweat, blood, baby oil and other gunge wrestlers had covered it in and when the WWF changed their logo from the block logo to the scratch logo they replaced the Intercontinental belt. The overall design was the same except the logo plate was different and the strap was black and the belt had the new WWF scratch logo: 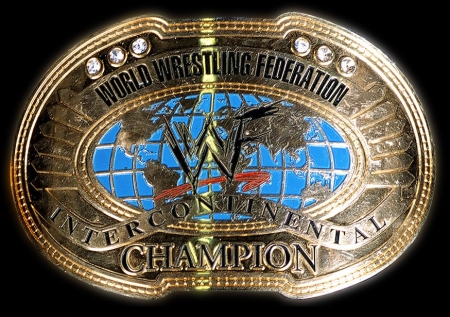 This belt has been held by many superstars over the last 13 years and is also the longest-running belt design in WWF/WWE history. Superstars such as The Rock, Triple H, Chris Jericho, Chris Benoit, Eddie Guerrero, Edge and others held the WWF logo version.

In 2002 when the WWF was forced to change its company name to World Wrestling Entertainment and slightly alter its logo, the belt again underwent small changes. The main plate was made bigger, the banners were changed to fit a removable nameplate on it and the WWF logos were replaced with WWE logos. The logo plate was also removed. 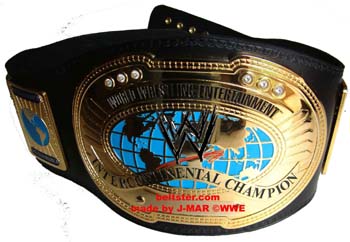 The belts were continued to be made by J-Mar until 2010 when Dave Millican took over. The belt is still the same but with better quality plates and leather. The leather on the J Mar belts also featured WWF and WWE logo tooling whereas on the Dave Millican belts they have sea shell tooling. 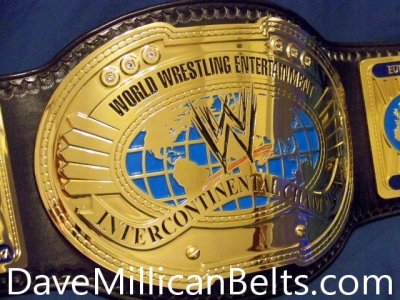 In October 2011 during a WWE PPV, then-current Intercontinental champion Cody Rhodes debuted a modified version of the classic Reggie Parks Intercontinental belt that was used from 1986 – 1998. It was on white leather and featured several differences from the original. This is due to the fact it wasn’t made by Reggie Parks or Dave Millican (from the original artwork), but by Joe Marshall of J-Mar belts using his own version of the artwork. Instead of the WWF block logo it now featured the WWE scratch logo, it had no logo plate or gold tip, the leather cut was different and the side plates were the wrong sizes. The main plate artwork errors included the wrong style globe, stars, font, banner style and the side plates featured different wrestler artwork. This along with a textured design on all the plates made it much different than it should have looked. Below is a picture of J-Mar’s version of the belt. 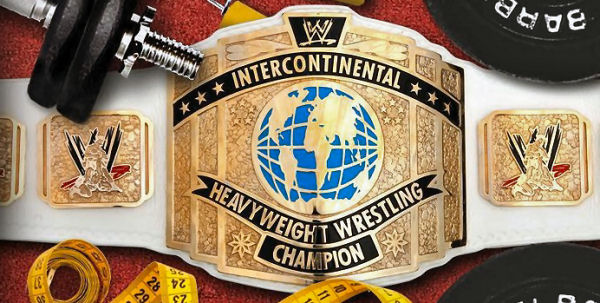 After seeing their copyrighted artwork being used on WWE TV, Midwest Belts (Reggie Parks) contacted WWE and had the belt removed from TV (although it is still used at house shows and in promo pictures) and they made and sent in a replacement made from the original artwork with the only alteration being the WWE scratch logo in place of the old WWF block logos.

Here is a picture of the belt made from the correct artwork and currently used on TV as the Intercontinental title. 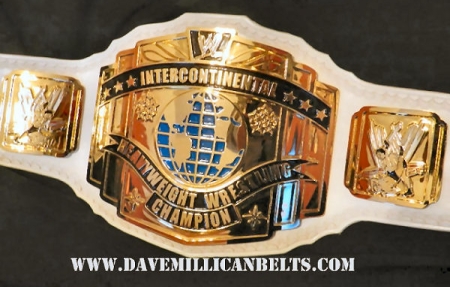 It is great to see a classic design with an updated twist on TV again. Here’s hoping we eventually see a return of the Winged Eagle to pair back up with the classic Intercontinental belt!