They say if you can remember the 80s, you’re old… 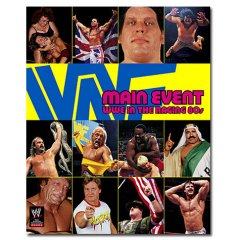 I guess that makes me old, then – this book made memories come flooding back for me, and in this case that’s a good thing. Yes folks, it had to happen – a book based on the era of the larger-than-life, the over the top, the super bombastic characters, matches, feuds and shows of the 1980s – arguably the era that Hogan built.

As you can imagine, the giant red and yellow spectre of Hulkamania looms large over the vast majority of this recap of the WWE in the 1980s – but Hogan’s presence is by no means the be-all and end-all of this great decade of wrestling.

As the book shows, there were plenty of other stars to go round – both face and heel, and author Brian Shields takes you through plenty of them.

The format of the book is rather nice – a quick timeline of how each year played out, with the key events laid out and explained briefly, followed by more in-depth biographies of selected key figures, wrapped up by a supercard guide to all the big shows that the 1980s threw up, and a title history marking all the title changes of the decade.

Now, it sounds like there’s not much of substance within this framework – but you’d be wrong. Given that each major superstar or tag team is given a couple of pages, there is a surprising amount of detail put in by the author. Obviously, it’s been ‘adapted’ to WWE canon in some cases, but that’s to be expected. What is a nice touch is that a lot of the profiles include a brief mention of what happened to each profiled star.

Surprisingly for me, a lot of the other US promotions are mentioned by name and the wrestlers’ careers in those promotions touched on briefly. I’d presume that with Vince ultimately winning the war, he sees no need to adapt the “We’re the only game in town” approach that they currently have with TNA, and the book works better for that.

If you can overlook some of the obvious editing of some parts of history – the obvious one being that Hulk Hogan lifted Andre high above his shoulders in Detroit at WrestleMania III in front of 93,000 fans, then you’ll be fine.

The book really does put across how monumental the 1980s were for the wrestling business, and how certain players defined the industry and all who followed. If you were a kid growing up in the 80s, then this book will be a who’s who of your childhood. All of my favourites were in here, and even some of the guys I loved to hate.

Taking the book as a document of a decade, it does surprisingly well. Don’t expect any behind the scenes revelations or in-depth examinations of how the business developed and grew and eventually became the huge multi-million dollar business it is today; no, instead you have a book that is dedicated the performers.

If it happened in a ring in the 80s, and it made a huge splash in the wrestling world, it’s probably in here. On that level, it’s a great read. It’s great for someone like me that watched a lot of this as it happened, and I’d imagine it’s an invaluable aid for some newer fans, who wonder why the guys wheeled out on Raw and Smackdown as ‘Legends’ are classed as that. This is the book to put them in perspective.

I’ll be honest here – I loved this book. I’m a sucker for historical books about the wrestling industry. I love to read about ‘the days gone by’ and the like. This book is fantastic! If you’re even remotely a fan of wrestling, and specifically the WWE, this is a great book to dip in and out of. If you lived through the 80s or if you just want to know more about them, this book covers it all.