By Dan
Wrestling Music CD Reviews
This page contains affiliate links. At no additional cost to you, we may earn a commission if you click through and make a purchase. Learn more

“Theme Addict” – WWE The Music Volume 6 is the latest WWE music CD to be released by the WWE and Sony Music. The CD is jam packed with some of the newest and freshest WWE theme tunes, from superstars such as Carlito Caribbean Cool , Shelton Benjamin and John Bradshaw Layfield plus many more with recording artists including the likes of Motorhead and Drowning Pool. 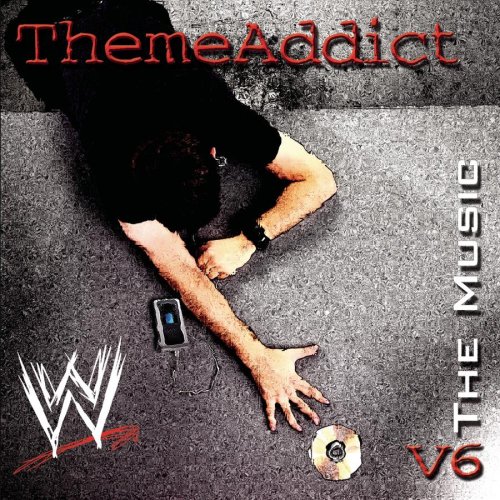 The WWE music releases have always been popular with fans, from way back in the 80’s with The Piledriver Album, to the current day, with the WWE’s Anthology CD set, as well as their last release, WWE Originals. This album surely would be no different than its predecessors, and it had been a number of years since the WWE had released a CD with new theme tunes, so it was certainly highly anticipated, so without any further a do, here is my review of “Theme Addict”.

I suppose its quite appropriate to start the CD off with “Line In The Sand” the current theme tune for RAW’s most dominate stable – Evolution, made up of Ric Flair, Batista and current World Heavyweight Champion, Triple H. Legendary heavy metal band, Motorhead perform this track for Evolution, much like they did a few years back for Triple H when they performed “The Game”. I’ll be honest and admit I’m not much of a heavy metal fan, but this track is superb, every time I watch Raw and Evolution come out, I always find myself singing along to the theme tune, so its great to finally have it on CD, one of the best tunes on the CD.

“Cool” is the title for track 2, which is obviously for one of Smackdown’s newest superstars, Carlito Caribbean Cool. The chilled out, Caribbean style tune isn’t exactly something you could listen to over and over again, but hey, its still “Cool!”.

Skipping to track 4 now and I think this may be my favourite theme tune from the whole CD “ Just Close Your Eyes” by Waterproof Blonde, the entrance tune for one of RAW most talented superstars, Christian This is a great tune, and without trying to sound like Simon Cowell, I could see this song doing very well in the charts, its modern and very catchy, well at least I think so.

Track 6 – “Real Good Girl” – the theme tune for the WWE’s Diva Search contest , this song has a sort of Country feeling to it, it’s a little cheesy, buts its catchy again, and I’m sure some one out there will like it.

Track 9 – “The Darkest Side” – How many theme tunes has The Undertaker had since his debut in 1990?, Your guess is as good as mine. However, this new tunes takes bits and pieces of all “The Deadman’s” entrance tunes, throws them into a big pot and mixes them up. The tune is what it is, nothing really special, but if you’re a Taker fan, then no doubt you’ll want to hear this theme tune.

I’ll be the first to admit that when Eugene first made his debut of RAW, I wasn’t a huge fan, in fact I thought the character was a little stupid, but after a few weeks I warmed to the guy, and feel the wacky and upbeat attitude of Eugene is a great addition to RAW. Track 10 is entitled “Child’s Party” and reflects the Eugene character perfectly, its has a feel of the theme tune from the Rocky movies, a sort of upbeat and motivating tune. The tune is fun and as I said reflects the Eugene character perfectly.

Track 13 is the new theme tune for WWE Smackdown entitled “Rise Up” , this track was written by both Jim Johnson and Drowning Pool, who also performed the track. This is another heavy metal type tune, which aptly suit’s the WWE Smackdown TV programme. I’m again, not a huge fan of Drowning Pool, in fact the only time I have heard their songs is on WWE TV, but what I’ve heard I have liked, and this tune is no exception, good tune.

The final tune of the CD is called “Untouchables”, which is special new track performed by John Cena. This track is taken from John Cena’s forthcoming album which is due to be released in the new year. This track is pretty good, I’m not hugely into rap and hip hop, but I did think this was quite a good tune.

Right, that’s my picks of top tunes on this CD, some other tunes may not have you rocking as much as other. For instance the continuous chant on “Heidenreich, Heidenreich!” with some generic rock music in the background isn’t the best tune to listen to first thing in the morning, unless you want to have an headache all day. But, although it may not be the best tune to listen to, its certainly the ideal theme tune for Mr. Heidenreich.

Well, I have listened to the whole of this CD now, and I have to say it was pretty enjoyable. there is some very good tunes on this CD, “Line In The Sand” and “Just Close Your Eyes” are my favourite tunes, although I’m not to keen on Heidenreich’s theme tune “Dangerous Politics”, but all in all it’s a good compilation of tunes.

With every CD that is purchased, the WWE are also giving away a special bonus DVD which runs for half an hour. The DVD contains extended entrance videos of the superstars on the CD, and each video is cut to the superstars entrance music. The bonus DVD is a nice little extra.

This CD is a great listen for any WWE fan, its jam packed with the latest theme tunes from most of the top superstars in the WWE today. Most of the theme tunes are very good, some not that great, but its still fun to have them on CD. The addition of the bonus DVD is great, and makes the experience of listening to theme tracks that little bit better. If you’re a collector of WWE CD’s then I’m sure you don’t need me to tell you to get this, but if you’re a new WWE fan, them this CD would be ideal for you, and would be a perfect addition to your Christmas list.

The CD will be available from all good CD stockists from 15th November 2004.