By Saz
Wrestling Book Reviews
This page contains affiliate links. At no additional cost to you, we may earn a commission if you click through and make a purchase. Learn more

You know, one thing that WWF/E always stood for in my mind was quality, quality wrestlers, quality shows and quality nights in watching your favourite wrestlers battle it out. 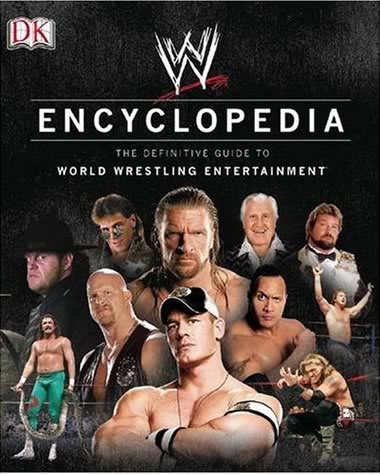 Long gone are the days when a WWF program consisted of this massive mean machine beating up on some poor unknown and defeating him within 2 or 3 minutes, where was the fun in that?

Then the times changed, the superstars began to wrestle each other week in week out and this once teenager was hooked.

So what made WWF so watchable?

The characters, each wrestler had their own distinct character, dress, mode, sayings and some were good, some were bad. Sooner or later the good guy would come up against a bad guy and boom! I was on the edge of my seat.

It is such a shame that it didn’t last.

Which leads me onto the wrestling encyclopedia, which has been written by two employees of the company and forwarded by Vincent K. McMahon, my first instinct was that it was going to be interesting seeing where this goes and who was going to be omitted.

First off, the quality of the product is quite clear to see, the front and back cover has a montage of the greats intermingled with the not-so-greats. Opening the front cover, you are greeted with a montage of some of the arenas that the WWF/E have created and they are impressive photos.

The pages are set out cleverly, giving an almost baseball card feel to the entries, it also sets out all of the belt histories and describes differing match types as well, it also talks about the pay per views going into detail about each Wrestlemania.

It also has Chris Benoit in it.

They also don’t whitewash WCW either.

Yes, he’s a footnote, but it is good to see that, despite any differences, WWF/E has been gregarious with mentioning people who deserve mentioning.

Well, any smart marks reading this will be disappointed to hear that it is very much set towards the uneducated fan, with prose that, well, it patronises you a little.

Some people may also disagree with some of the entries and the amount of prose that has been afforded to some superstars. Shawn Michaels and Bret Hart getting a single page, whilst others get double pages. There is also the usual McMahon bias as well, seriously? Did Shane and Stephanie really need a page written about them?

That being said, it is very thorough in its mention of people, including some of the characters featured on wrestlecrap, such as the Mantaur! There are also 3 separate entries for Viscera, Big Daddy V and Mable… most encyclopedias would put Viscera (see waste of space).

It is interesting though to flick through, if you can tolerate the tendency to gloss over the bad (for instance the fact that, according to the encyclopedia, they are all alive and well to this very day!), the usual McMahon bias and the fact that it is a little Kiddy talk in places. However, this is understandable.

Though I would debate the “encyclopedia” element, I can understand why they named it, encyclopedia is much more snappy than “a visual, alphabetised history of WWF/E”.

Is it worth 25 of your hard earned shiny gold coins? If you want to peruse through the history of the WWE then perhaps. Though, last I checked it was £16.99 from Amazon and that is a price that I would recommend you buy at.