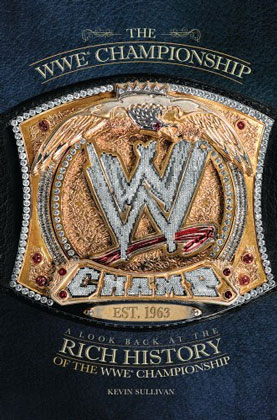 If asked to summarize the book, I would have to say “plot synopsis”. The book is just a detailed description of the storylines surrounding the title changes over the years, covering its creation in 1963 to Sheamus’ second reign at ‘WWE Fatal Four Way’. That’s it. The WWE really did miss a golden opportunity with this book. A history of the physical belt themselves would have been something of great interest – pictures of the various belt designs, history, specifications; all these could have been a great addition to the book but they’re omitted. I mean, Cult of Whatever has our own guide on the history of the actual belt itself, but some official information would have been cool.

Being a WWE book, you can expect the usual suspects get their pointless burial. WCW, Vince Russo, Eric Bischoff and Ultimate Warrior all receive their standard attacks. That’s right; in a book about the WWE Championship the WWE still finds an opportunity to attack Russo and Bischoff. It’s not even attacking Russo’s disdain for championships or Bischoff’s work in the WWE, it’s just a pointless attack on WCW randomly. At one point the book it describes Ultimate Warrior as being the most popular face in the company yet paradoxically it still goes on about how Warrior never deserved the title.

Even more baffling the book describes how Sid Vicious treated the title like a burden yet his work was still praised. You can also expect the WWE to blur the lines of reality and storyline. In this case it’s almost confusing how they go about blurring this line. At best I can make out they ask us to believe that the events that happen in the ring are real, but at the same time they ask us to look at the wrestlers as actors playing a part. That description alone should explain just how convoluted the blurring is as that’s the clearest I could describe it.

Another major annoyance is the book is so homogenized and “safe”. Technically if this is the history of the WWE Championship it should only go back about 8 years. There’s no reason for it to be referred to as the WWE Championship throughout the book. The forward says this is to maintain consistency but I’m sure no would get confused by calling the title the “WWF Championship”. Seeing wrestlers like Bruno Sammartino or Pedro Morales be described as great “sports entertainers” is just irritating. It’s just more of the WWE trying to pull the wool over our eyes and make us forget that what they’re doing is wrestling, and that the second ‘W’ stands for wrestling.

The book itself does present an inherent problem with having two world championships in the WWE. The book decorates the WWE Championship as the greatest accomplishment in sports entertainment, yet at the same time WWE programming asks us to also look at the World Heavyweight Championship as the greatest accomplishment in the WWE. This book does make the WWE Championship feel like a big deal and some of the descriptions in the book do a better job at selling it then they do on TV lately. But with the WWE’s rapid title changes, a different problem in and of itself, the book is already two title reigns out of date.

This is one of those times I have to judge the book a bit differently – it’s not meant for the scrutiny of a reviewer like me but rather it’s for the little kid who idolizes the WWE Superstars and wants to know more about the WWE Championship. In that regard the book is good, and would make the perfect gift for the little WWE fan you might have. For you older wrestling fans; I doubt you’ll find much interest in it.