Summerslam, one of the original “Big Four” pay-per-view events, has always been one of the more anticipated shows on the WWE calendar. Unlike the Royal Rumble or Survivor Series, it never had an only-once-per-year gimmick match to sell it, or the aura of Wrestlemania to lure the public into buying the show. Summerslam sold itself on usually having fantastic matches that were, arguably, highlights of the year. 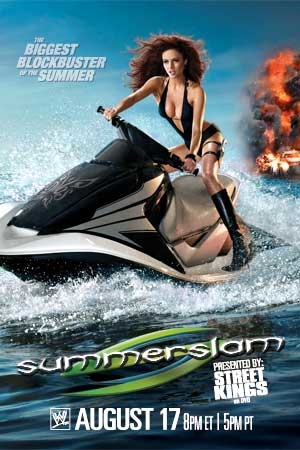 Summerslam ’88 had the first real teaming of Randy Savage & Hulk Hogan and the first title win of the Ultimate Warrior, Summerslam ’89 had a brilliant tag match between The Brain Busters and The Hart Foundation as well as an IC Title clash between Rick Rude and The Ultimate Warrior, Summerslam ’91 had Bret v Mr. Perfect and the Jailhouse Match between The Mountie and The Big Boss Man, , ’92 was the only worldwide PPV to take place outside America. Summerslam ’94 had the best blue-barred cage match, a barnstormer between Bret and Owen Hart, not to mention the Undertaker v Undertaker clash that I actually enjoyed.

Austin v Undertaker at 1998’s event was a great encounter, Hakushi v 1-2-3 Kid from 1995 was an unexpected classic (similar to Blitzkrieg v Juventud from WCW Spring Stampede 1999), Michaels v Vader from the following year was also a stunning bout (with added HBK hissy-fit), Bret v Undertaker (refereed by Michaels) at Summerslam ’97 was, perhaps, the most heated match in the event’s history while Summerslam was also the birthplace of one of WWE’s favourite matches, ‘Tables, Ladders and Chairs’ as The Dudleys, The Hardys and Edge & Christian all raised the bar for all ladder matches to follow.

In addition to all of that, Summerslam was where Brock Lesnar climbed to the top of the mountain to become the youngest ever holder of the WWE Championship (a record that still stands),  while the 2004 edition is when Randy Orton became the youngest ever World Champion in WWE history (a record that also still stands). Summerslam is also the  event where Hulk Hogan and Shawn Michaels faced off in a singles match; one of the last true dream matches that were left in pro-wrestling. The following year (2006) Hogan faced off against Randy Orton.

You can easily see (through my long-winded opening) that Summerslam has a long tradition and a high standard to maintain through the years. The August event has, more often that not, given us at least one MOTY contender, so would 2008’s edition live up to that expectation or would it sink without trace like 1993, 1995 and 1999’s efforts? That was the $1million question.

The show opens with a great hype video that sets the tone for the PPV as well as give a brief overview of the show’s legacy. The lead up to the HIAC match dominates (which isn’t a bad thing) and Edge’s brutal destruction of Mick Foley is still a glorious sight to behold.

The pyro goes off and the first thing to hit you is how blooming awesome the Summerslam set is. WWE usually do a good job of making their PPV’s seem special, but this set is something else and really shows the gulf between WWE and every other wrestling (sports?) brand in the world today.

Another Summerslam tradition is kept alive, that of having a (potentially) fast-paced, action-packed opener to get the fans into things. Jeff Hardy & MVP (this was before the current angle where Porter couldn’t get a win if Barry Horowitz laid down for him) have a great match with some fantastic wrestling psychology on behalf of the latter and some nice high-spots from the former.

It doesn’t hurt that Jeff Hardy is the most over guy on the roster, but the fans in attendance are really into things and add an extra dimension to the entire evening. A really good opener that sets the tone for the rest of the PPV.

Maria (one of my favourite Divas – I like redheads) interviewing Santino was always going to be interesting due to their past, ahem, relationship, but it is even funnier than I anticipated with Marella (in my opinion, the greatest comedy wrestler I have ever seen) just cracking me up with his dialect and mangling of the language.

As funny as the interview was, I wish that the promo Santino cut on RAW, where he debated with himself about being the WWE Women’s Champion had been included as an extra. I digress; the next match on the card is the first ever Intergender Winner Takes All tag-match where Mickie James and Kofi Kingston put their WWE Women’s and Intercontinental titles on the line.

Kingston, one of a raft of newcomers who debuted last year, is someone I enjoy watching, as are the two ladies in the match (it doesn’t hurt that they are both good looking), so I knew that the bout would be, at least, passable. Santino, as I said earlier, is one of the best comedy performers in history, especially as he isn’t afraid to make an idiot of himself and because he keeps the comedy coming throughout his matches.

That being said, the match is too short, even if the action is very good (with Kofi’s last bump looking very brutal). To be honest, it doesn’t matter how good the match is; it led to the Honk-a-Meter, and for that alone, it deserves to be heralded.

After the comedy comes the serious; Shawn Michaels announcing whether he is going to retire due to the injured eye he suffered at the hands of Chris Jericho at the previous month’s Great American Bash. The promo video preceding HBK’s entrance is brilliantly done and, once again, shows why the WWE are the pinnacle of television production.

The angle had been building beautifully before Summerslam, with good matches and killer promos from both men. This just pushed it over the edge with a stunningly worked situation that had everyone in attendance on their feet, gasping in shock at what they were seeing.

From a killer angle, we come to an abomination of one that, for lack of a better term, takes the piss. Matt Hardy v Mark Henry had been built well over the previous few weeks on ECW television, so to throw all of that down the toilet with a THIRTY SECOND screwjob is an insult to every fan who was looking forward to a championship match. The fact that they had the rematch on the ECW show and gave it the time it deserved is a second slap in the face. At least the follow-up bout is included in the extras.

Of the remaining matches, CM Punk v JBL is a pleasant surprise (with a nasty clash of heads), while Triple H v The Great Khali is a bona fide miracle. John Cena v Batista, a match I feel should have been kept for Wrestlemania, is also a much better encounter than many predicted (which also has a brilliant hype video and a great voice-over promo from Cena). Each of these three matches were hard-hitting and worthy of their semi-main event status. Although all the matches were playing second fiddle to the last match on the card and the real reason that this year’s Summerslam will be remembered.

‘Hell in a Cell’, the crowning glory of WWE’s gimmick matches and the structure most synonymous with Undertaker, would close the show as the hottest rivalry of 2008 (just eclipsing HBK/Jericho) continued apace when Edge would try and take out “The Deadman” in the same match he cost Undertaker the World Heavyweight Championship at the previous year’s Survivor Series.

The rivalry between the two really started in May of 2007 when Edge jumped from RAW to Smackdown and cashed in his ‘Money in the Bank’ briefcase (which he had won from Mr. Kennedy on that week’s RAW) on Undertaker after a gruelling cage match between him and Batista.

Unfortunately the two didn’t get to continue things as Undertaker healed some injuries and then Edge got injured a few months later. At Survivor Series 2007, Edge returned and cost ‘Taker the title against Batista, kick-starting the feud once again.

They locked up at Wrestlemania XXIV (in my match of the year), followed by a rematch at Backlash, another bout at Judgment Day and a TLC match at One Night Stand. The last match had a stipulation that, if he lost, Undertaker would have to leave WWE for good (and we all know they last forever). Of course, he did lose and Vickie Guerrero did indeed banish him… until Edge cheated on her with the wedding planner and she lost it mentally. Wishing to punish Edge, she re-instated Undertaker and booked Edge into the most sadistic match of his career.

The pre-hype video is another belter, with the mental breakdown of Edge after Mick Foley talked some sense into him, then getting hammered for his trouble, is an astounding piece of work from the Canadian. It’s no exaggeration to say that this was the most anticipated match of the night, and it’s no exaggeration to say that it lived up to said hype.

The fans in attendance were buzzing for the match and both men worked their backsides off to give them something memorable. From brutal shots and near falls to Undertaker giving Edge a receipt for every single weapon shot that had been inflicted on him over the entire feud, this contest is a fitting close to the best feud of the last twelve months and ends the show on a high.

There are three extras, with the first of them being a sub-1min highlight package of the pre-Summerslam party. The other two have more meat to their bones though; the second extra being an interview with HBK from the RAW following Summerslam that deals with the aftermath of his and Jericho’s interaction the previous night.

The final extra is the ECW Championship rematch between Mark Henry and Matt Hardy and is a good match. That this wasn’t the bout booked for Summerslam is a travesty.

Summerslam was one of the better PPV events in 2008. The opener is a great bout, all the championship matches (outside of the ECW one) are better than anticipated, John Cena and Batista, considering the general consensus is that they are limited workers, put on a great brawl and ‘Hell in a Cell’ delivered all it promised and so much more.

With only one duffer on a seven match card, this is value for money, but even if all the undercard sucked, this is worth buying simply for the main-event alone.

The extras are decent, but it’s always nice to get a match among them.

Points: 8/10 (with a point deducted due to the, frankly insulting, second extra).