Unforgiven has always been a decent enough PPV. The 2008 edition had the added wrinkle of the debut of another WWE stipulation – The Championship Scramble. Only this time, it’s not one match, it’s three matches for the top three titles of each brand. 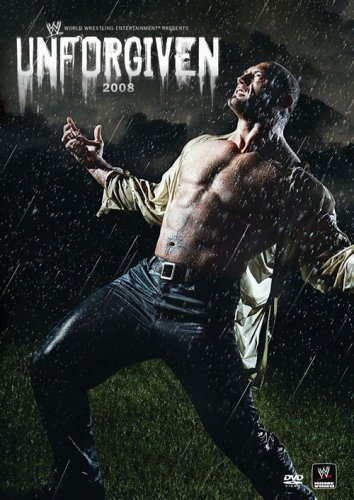 ECW, with Todd Grisham and Matt Stiker on commentary, open the show and debut the Championship Scramble as Mark Henry defends his ECW Championship against Matt Hardy, The Miz, Chavo Guerrero and Finlay. The rules of the matches, just so you can go in are as follows:-

The first Scramble is an enjoyable bout, with Miz and Matt Hardy starting things out. This would mean they had five minutes one-on-one… and they made the most of it with an enjoyable set of exchanges. The next fifteen minutes go by quite quickly (which is a good thing) and had enough “title changes” to keep it interesting.

The one thing it did do, which was a main worry of mine, was make the closing moments interesting and exciting. I’ve sometimes found matches with a set running time to lack urgency due to you knowing it’s going to go for a certain period and lacking an unexpected or “out of nowhere” finish.

Full credit to the ECW guys for making the debut match work and set the bar for the other two Scrambles.

The Smackdown Scramble was my favourite, mainly due to The Brian Kendrick making it to a PPV main event. The action in this one was just as intense as the ECW match, but had better action and a more exciting finish (ignoring Jeff Hardy’s illogical behaviour). Kendrick was the “Man of the Match” and this was the MOTN.

Jeff Hardy, who gets a monstrous ovation, starts things off with Shelton Benjamin and the two men put on a great first period. Once the other wrestlers start to come in, the action picks up. Brian Kendrick, who has had one of the best character alterations in recent history, shows that he can hang with the main-event level wrestlers and the commentary team of Jim Ross and Tazz prove a vast improvement over the previous Smackdown pairing of Michael Cole and Coach and/or Michael Cole and Tazz.

All in all, WWE showed that they can perform the same gimmick match more than once on the same show and make it work (like they did with the Elimination Chamber back in February)

RAW’s Scramble had an interesting flavour due to this being the only match that guaranteed a new champion after a backstage angle between CM Punk, Kofi Kingston, Cody Rhodes, Ted DiBiase, Manu and Randy Orton. A backstage beatdown, a failed save by Kofi and a punt to the head of Punk by Orton all led to the World Champion being unable to defend his title and a mystery entrant taking his place.

Batista and JBL starts things off as Michael Cole and Jerry Lawler provide commentary for the RAW side of things. As you can probably guess, the action is slower paced than the previous two Scrambles… but that doesn’t mean it isn’t just as entertaining.

The finish is a fantastic piece of booking that infuriates the fans in the right way. The look on Batista’s face says it all as WWE provide another interesting finish to the third Scramble. This mystery entrant was also a shocking surprise and led to a massively unexpected ending to the contest; a match that had a lot of heavy-hitting action and also contained the biggest names out of the three Scramble Matches.

The Divas Title Match is alright, but the hotness of Maryse (in a stunning ring outfit) makes it easier to watch (which is saying something when the opponent is Michelle McCool, the most easily despised female on the roster).

The other match on the card is the Unsanctioned Match between Chris Jericho and Shawn Michaels. The last time the WWE had an Unsanctioned Match was at Summerslam 2002 when HBK and HHH stole the show in Shawn’s return match. This meant that the history of that match combined with the brilliant feud between Michaels and Jericho should have heralded a show-stealing contest.

The action is pretty good (with an elbow from the top through the announce table to both Jericho AND Lance Cade being a highlight), it’s the lame finish to what should have been a bloodbath that swarmed all over the arena, but ended up being a slightly more edgy hardcore match. When compared to the ending of the last HBK/Jericho PPV match at The Great American Bash, this is such a letdown and really makes all the action beforehand seem not worth the effort.

Also on the disc is the segment where Big Show turned heel (siding with Vickie Guerrero) and knocked Undertaker out with a punch. This segment was replayed endlessly on Smackdown, much to the chagrin of my good friend, Jimmy Redman.

The first of the two extras is a quick interview with Guerrero and Show to find out some answers as to why they conspired to attack Undertaker. The response is, surprisingly logical and with merit.

The second extra is the better of the two as Chris Jericho addresses the RAW crowd the night after Unforgiven. This is a stunning little sub-5mins masterclass in being a smug heel riling up the fans. Jericho also shows us the, quite impressive, war wounds he suffered in his match with HBK.

Unforgiven was a PPV of two halves. 50% of the card were Scramble matches and the other 50% were standard matches. That the Scramble matches dominated the show is hardly a surprise, but the Divas and Tag Title matches are worth watching on their own merits.

The Unsanctioned Match was good, but it would have been a lot better if there wasn’t so much history attached to it. The two main angles (the attacks on CM Punk and Undertaker) were both very well played out and advanced multiple storylines for the next few months.

Overall, the PPV stands and falls on the Championship Scramble concept, and as such, can be considered a success.