Traditionally WWE’s second biggest pay-per-view event, this year’s event ended up being a slight thumbs up of a show (but not by much). This DVD release accurately reflects that. 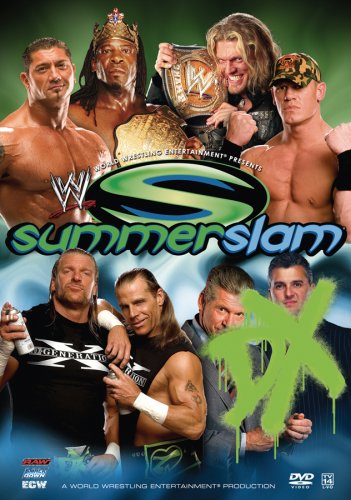 Chapters: 11 chapters. These are entitled:

The shows opens with the Rey Mysterio vs Chavo Guerrero match. Whilst technically sound, the storyline wasn’t over with the live crowd, who actually cheered Chavo and booed Mysterio. It was a decent match, but nothing spectacular. Second match saw Big Show squash Sabu in an ECW title match. It kind of buried the ECW title to have the title match take place so early on the card. Not much of a match. Third match saw the big ‘Legend vs Legend Killer’ match, featuring Hulk Hogan vs Randy Orton. This feud was a complete flop. Originally it was supposed to centre around Orton hitting on Brooke Hogan, Hulk’s daughter. But a combination of Hulk getting cold feet on the idea and changing track, plus several bad segments on Raw involving an awful Hogan impersonator, and Hogan himself suffering a knee injury in the weeks leading up to the match led to this feud being aborted quickly. Hogan still got a big reaction coming out, and it was the usual Hogan match, for better or worse.

Ric Flair vs Mick Foley in an ‘I Quit’ match was a bloody brawl, with both guys taking an incredible amount of punishment, and Melina getting involved in the finish. It was a very entertaining match and both guys worked extremely hard. This was one of the highlights of the night. Next match was anything but a highlight. Batista vs King Booker was an awful match, with a terribly unsatisfying finish. There were several points during the match when the live crowd were chanting ‘boring’. In the semi-main event came DX vs the McMahons. This was an entertaining match, that gave the crowd exactly what they wanted. The Spirit Squad, Ken Kennedy, William Regal and Fit Finlay were all involved before the match took place. After that came the dominant DX show, as they took apart the McMahons. The main event on the DVD was the best match of the night, Edge vs John Cena for the WWE Championship. Just a great heel performance by Edge, and these two wrestlers worked so well together. A great main event, with a surprising finish.

The first two extras were both custom-made Summerslam commercials. For some reason, I don’t recall either of these getting much play on Sky, which is a shame, as both commercials were very well made. The first one, entitled ‘The Last Hot Dog’, saw many WWE superstars enjoying a barbeque outside. DX were the cooks. HHH and Michaels panicked when they realised only one hot dog was left. Viscera and Kane eyed up the last hot dog from a distance and then both decided to grab it. On route to the hot dog, Spirit Squad, Eugene, Trish Stratus and Chris Masters all got knocked out of the way. Just as both guys got there, Coach took the last hot dog and declared how it was his ‘lucky day’, with both big guys staring daggers through him. Funny stuff.

The second extra was called ‘Potato Sack Race’, with Carlito and Shelton Benjamin (both in full ring gear) inexplicably competing against each other in a ‘school sports day’ style, ‘potato sack race’. Shelton acted all arrogant, determined to win and shot ahead of Carlito, who hung behind and was distracted by a late entrant: Candice Michelle, wearing the skimpiest of bikinis, and jumping up and down in her sack, jiggling her breasts in slow motion. John Cena, Chris Masters and Eugene all looked on in amazement at her. The punchline to the ad was yet another late entrant – Mae Young, clad in a one piece bathing suit. Again, quite funny stuff.

The third extra was a ‘behind the scenes, making of’ video of the two commercials. It was shorter than it could have been, and didn’t reveal too much, other than it looked like the superstars all had a great day filming in the great weather, outdoors.

The fourth and final extra saw the events of the Raw 21/8/06 episode recapped, the day after Summerslam, focusing in particular on the John Cena and Edge confrontation. This was the show where Cena and Edge brawled outside the arena and Cena threw Edge into the lake. A brief clip courtesy of WWE.com aired, showing Edge being rescued from the lake by lifeguards.

I’d give this DVD a slight thumbs up and my recommendation. As an overall package, it is worth purchasing. The DVD extras are a slight improvement on recent efforts. As for the show itself, the main event is very good, and the DX and Hogan matches deliver the feel-good entertainment.