By Clarkey
WWE DVD Reviews
This page contains affiliate links. At no additional cost to you, we may earn a commission if you click through and make a purchase. Learn more

Everybody can have an off day. Seemingly everything collating to go wrong, and normally coming just before an important day in your life. WWE New Years Revolution 2007 could be labelled as one of these days for the WWE; it was (in hindsight) an unnecessary extra burden on the roster as one of the addition PPV’s of time, and with one of the WWE’s prime events of the year forthcoming (The Royal Rumble), it was always going to be thought of as an afterthought and extra load on weight of the shoulders of in this case the Raw roster. Following along the lines of Smackdown’s incarnation of The Great American Bash (sigh), and the frankly awful WWECW solo PPV of the previous month, December to Remember, this was the Raw rosters chance to fly solo and fill a PPV card with it’s own brand of entertainment. Just as was the problem with other solo branded shows on the whole, there just wasn’t enough talent to compensate and lead overall to a mixed bunch of both missed opportunities and varied eyesores. The move back to cross branded PPV’s has bucked the trend, as has the WWE’s other wise move of cutting back on excess weight on the PPV side, to prevent over-egging the product. It was no surprise to see this become the last ever NYR PPV; a short existence and not a particularly memorable one to be frank. 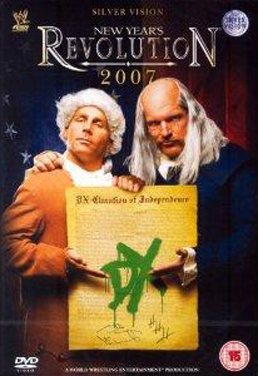 I will admit that on paper this all resolved to be potential nightmare of a show to watch (well rewatch), and my cynicism going in won’t have aided greatly in getting across an objective view. To cut to the case, I got more enjoyment from the DVD extra in the form of the Federline/Cena match from the New Years Day Raw than I did from anything presented on the actual PPV. The problem here is that while there is the good, it is not something that lures you back in for a reviewing. Everything is passable; with nothing pant wettingly exciting enough to mark it down as a purchase beyond a budget release or for collective’s sake. Just as the PPV itself was an extra burden, watching the DVD can feel the same when there is so much out there you could be watching, reading or playing instead and finding more enjoyable.

There was a sleeper hit amongst this wave of averageness, with the Tag Team Turmoil providing a surprising decent contest what with the mix of absurd talents booked with the match, but again nothing that could put it on a par with the better TTT matches of the past. The Jeff Hardy/Nitro cage match was the expected mix of mishaps and spots that had forecasted their feud up to this point, and didn’t offer anything that hadn’t already been seen by the end spot. Mickie and Victoria for all their talent could not provide a decent showing in their women’s contest, and Dykstra/Flair was very passé and seeing where Dykstra finds himself now it sums up as to what the actual purpose of this match was beyond card filler. Talking of card filler, the alarm signals flared as soon as Masters and Carlito hit the ring. Their match stinking hardly helped proceedings. The much-touted DX/Rated RKO match is decent enough, with the changed finish on the back of Trip’s quad tear conspiring to ruin affairs. Again decent, but not something out of the ordinary, or the step up from those involved to urge myself to just off of my seat. The only match of real note that I did enjoy, was the main event of the evening. Umaga’s continued resolve and striving to put Cena away with everything was entertaining, but it all just felt as a tune up and build for the next match in the feud and encouraged the questioning as to why would one sit through this again, when they can watch the pay off match? And that just highlights the problems of these extra PPV’s before they were ditched; they were always building to the bigger event and now with the hindsight before purchasing dvd’s we can simply go for the bigger event over this elaborate way of building interest in such shows.

Overall, the PPV was pretty flat and quite drab. The DVD extras of the Federline match, and the laughable (in a wrestlecrap mindset) Trump vs Rosie O’Donnell match are nice to catch again but could be much easily caught a glimpse of through a quick Google search and are not really something essential to add to the DVD shelf. As I hinted at briefly earlier, I’d advise this one mainly to the collectives and to those getting it at a bargain basement price. There’s nothing to blow the barn doors way, and nothing that gets across the feeling that this is a must have to place alongside the rest piled into the DVD shelf, and the cash would be better spent on getting the Rumble that followed the nights proceedings.