By Steve McLaren
WWE DVD Reviews
This page contains affiliate links. At no additional cost to you, we may earn a commission if you click through and make a purchase. Learn more 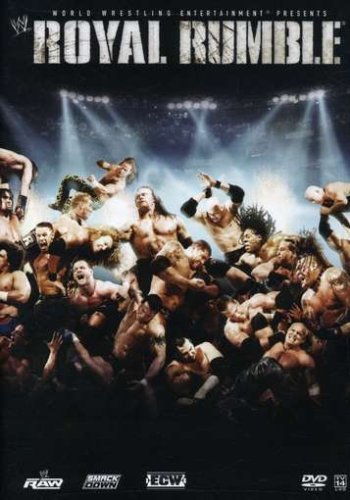 Disk 1 Chapters: 10 Chapters. These are entitled:

For a more detailed look at this PPV see: Royal Rumble 2007

The opener was The Hardys vs. MNM. These two teams have been feuding since December and it heated up when the Hardys smashed Joey Matthews nose across his face at Armageddon in the awesome ladder match the previous month. The week before the Royal Rumble MNM got their revenge of sorts in the form of injuring Matt Hardy’s ribs after the Matt Hardy vs Joey Matthews match on Smackdown. The actual match itself was given the right amount of time for both teams to have a great opener. The finish saw Jeff Hardy hit the Swanton Bomb and get the 3 count for the win.

In the night’s first trip to Theodore Long’s and Coach’s office, World Tag Team champs Edge and Randy Orton teased some sort of tension between themselves. Up next was, for the first time ever, an ECW Title match at the Royal Rumble.

The Bobby Lashley vs. Test match was very short but still managed to be somewhat tedious and at times painful viewing. After some very awkwardly performed moves Test was knocked to the outside and at the count of 8 decided he didn’t want to be the ECW champion that bad and walked off. Bobby Lashley chased after him and bought him back to the ring, he then hit his finisher as we cut to John Cena in the trainer’s room exchanging words with Vince McMahon.

The World Heavyweight championship match was up next. This saw Mr. Kennedy, who had won the right to fight Batista for the World Heavyweight title by ‘beating the clock’ on Smackdown. The match itself was a very typical and slow title match. Batista hit the Batista Bomb and that was that.

We go to the office of Theodore Long and the Coach once more where Hornswoggle, Kelly Kelly, The Great Khali and Ron Simmons all get in on the comedy.

The next match was one of the most hyped matches on the card, the Last Man Standing match between WWE Champion John Cena and Umaga. Their previous match at New Years Revolution was somewhat of a flashback to Sting vs. Vader in early WCW where the big nasty man wanted to destroy the smaller and beloved champion. This match however wasn’t, it was a full on war.

John Cena flung the steps from the centre of the ring all the way to the outside smashing Umaga square in the face. Cena bleeds like no mans business and in another cool spot, Umaga runs from the Raw announce table, onto the Smackdown table and tries to crush John Cena through the ECW table. Unfortunately for Umaga, Cena moves and he goes through the table. Even that wasn’t enough to keep Umaga down. Meanwhile Umaga’s handler Armando Estrada was undoing the top ring rope. Umaga attempted to use the metal pole which connected the rope to the post to give Cena a Samoan Spike, but alas, John Cena put Umaga in the STFU and choked him out using the top rope for the win. A sure fire MOTYC right there.

In our final trip to the office of T-Long and The Coach, Ric Flair ended up dancing with the sexy girls from ECW. Up next was the Royal Rumble match.

In one of the better Royal Rumble matches in a while, the number 30 entrant the Undertaker finally dumped the home town favourite Shawn Michaels over the top rope after 10 minutes of incredible exchanges after they both dumped out Edge and Randy Orton.

The Extras on the DVD featured the World Tag Title match from Raw on the 29th of January between Rated RKO and Cena/Michaels. In what turns out to be an enjoyable match, Cena and Michaels take home the gold. Also in a worthless angle, Donald Trump appears “Live” on the titan tron and drops dollars from the ceiling. The final extra sees Todd Grisham trying to get a word with The Undertaker after winning the Royal Rumble match but is brushed off, Kane then congratulates his brother.

Overall I’d say the John Cena vs. Umaga match is enough reason to buy this DVD, plus with the added bonus of a good Royal Rumble match, hot opener and a decent Tag Match on the extras you should get your moneys worth.