It’s time for the 2006 season of DVD reviews to start, and we kick off with New Year’s Revolution. For the second year running the NYR event held an Elimination Chamber match, pitting John Cena against 5 challengers to his title. Last year the Elimination Chamber saved the entire PPV from obscurity, will this happen again? 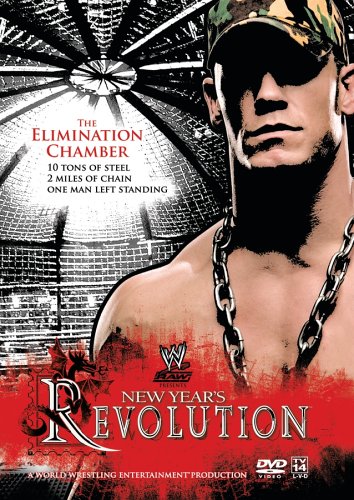 The month was January, the year 2006, and one of the two WWE monthly Pay-Per-Views was New Year’s Revolution, taking place Albany, New York. As mentioned the Elimination Chamber was very much the focal point of the entire show, but unlike the previous year’s card, it had some other redeeming features, with Edge taking on Ric Flair and Big Show taking on HHH. And then, right at the end, we get the bonus match that dreams are made of, Edge vs. John Cena.

The PPV kicks off with the Intercontinental Title match between Edge and Ric Flair. This feud was mainly built around Edge making fun of Ric Flair’s real-life road rage accusations and the divorce from his wife (something Edge should know about). In many ways the Intercontinental Title took a back seat in the feud, something that was common during Flair’s six month reign with the belt.

The match itself was the usual entertaining Ric Flair chop ‘n WHOO fest, with Edge not looking too bad considering how long he’s been out with his pectoral injury. But no matter what the reason, in this case that Edge didn’t care about winning the IC title because of what he had planned for later, I still hate seeing DQ endings on a PPV. You may have heard me complain about these before, but at least this time it wasn’t in a main event, and it did make perfect sense given what happened later on. A fairly pedestrian start to the show, but again, having this match first allowed the ending of the PPV to work better.

We then get a hilarious backstage interview with Kurt Angle and Daivari. Angle is always a good guy to go to for a good interview, and although the segment is short, it’s thoroughly entertaining. It also foreshadows Angle’s eventual face turn just a few weeks later.

We then have the Women’s Title match between Mickie and Trish. The feud is so well built up and detailed that it’s almost impossible for me to try and describe it, but I can inform you that this match came a few weeks after Mickie had defeated Victoria to become #1 contender. Mickie then took her affection for Trish to new levels, kissing her under some mistletoe, and spying on her in the shower. All highly entertaining stuff, and one of the best storylines I’ve seen for a while.

And the match is also the best divas match of the year thus far, and probably better than all the diva matches in 2005 as well. It’s stiff, highly competitive, and dramatic the whole way through. There were a few missed spots here and there, but nothing embarrassingly bad by any means. I definitely enjoyed this match, and if their WrestleMania 22 match is as good as this, it’s definitely something to look forward to.

Next up is a small interview segment with Maria interviewing… herself, before she is interrupted by Gregory Helms. Helms’ voice reminds me of Jeff Jarrett’s in some way, but then I hear Jarrett’s so much it tends to get stuck in my head. This segment doesn’t really add anything to the PPV, and it’s almost instantly forgettable.

From that we move to Gregory Helms taking on Jerry Lawler. After Lawler lost to Muhammad Hassan at the 2005 New Year’s Revolution, many expected the same thing here. But no, Lawler ends up winning the match, a decision that really sours my opinion of the contest. The match was built up bizarrely, with Helms claiming that Lawler had been insulting him on RAW, when Helms hadn’t even APPEARED on RAW. The match is pretty slow and boring, and when combined with the stupid result, it ends up being probably the low point of the show.

We head backstage for another segment, most likely due to the low card (Cena/Edge and Viscera/Shelton were not announced beforehand), meaning time has to be made up elsewhere. A recently debuted Shelton’s Momma has an… interesting confrontation with Viscera, who somehow gets his entrance music to play in a cafeteria. Quite the bizarre segment which sets up a match later on in the card.

Next up is Big Show taking on HHH. HHH had been suffering the wrath of the Big Show, who claimed that HHH had to repent for his actions against the rest of the roster. HHH ended up breaking Big Show’s hand with a sledgehammer during the contract signing for this match, meaning that Big Show has a huge cast on his hand, which he called a sledgehammer of his own. As this match comes around, I’m still trying to work out why a contract signing was needed for a mid-card PPV match. But then I remember that HHH is involved.

The match is pretty good considering the limitations of Big Show and the repetitiveness of HHH. Big Show focuses on selling the hand injury a lot throughout, even mustering up tears of pain to put it over. It told a perfectly good story of HHH working on the hand, meaning Show couldn’t chokeslam him, causing a left-handed attempt that doesn’t have the normal power. I wish more matches would follow this kind of psychology pattern. Definitely one to watch, even if you don’t like either of the participants.

After a whole fifteen minutes of build-up, we now get Viscera taking on Shelton Benjamin. This was the debut of Momma at ringside, and the commentary for the match focuses around what she’s talking about rather than what’s happening in the ring. To be fair, there’s very little of interest happening in the ring. For a filler match this served its purpose, but it’s not a match you’re going to want to see more than once, if that.

We now come to the Bra and Panties Gauntlet, a match made by interim GM Vince McMahon for his own personal amusement. And ours. Sure, the in-ring content is pretty lacklustre, but there are attractive women being stripped in the middle of a wrestling ring. Of course, it’s almost ruined when Mae Young makes her annual appearance, and thankfully she manages to keep SOME clothes on. She also goes too far and nearly rips Victoria’s bra off, unfortunately she fails. For quick, filling, hormone-pleasing T&A, this is pretty good. If you’re a pure wrestling fan, you’ll complain about it.

And now we come to the show’s main attraction, the Elimination Chamber. Things don’t start off well for the WWE, Kurt Angle enters to a huge face pop, whilst John Cena comes to the ring to the biggest heel pop of his career thus far, including when he was actually a heel. And the heel heat continues throughout, with anyone who touches him, even heels Carlito and Chris Masters, getting a thunderous face ovation. For a Cena hater such as myself, this is comedy gold.

The match itself is limited due to the lack of space, but Carlito manages to stand out, with some good selling and a superb plancha to the steel girders on the outside. When watching this match though you seem to think you’re in some kinda of fantasy world. Kurt Angle is eliminated first which completely kills the crowd, and the crowd are killed further when Kane and Shawn Michaels are eliminated, leaving the crowd’s least favourite wrestler as a dead on certainty to retain his title. With the crowd not interested the match dies on its feet, and the ending comes out of nowhere, almost as if they were told to end it early. A gimmick match like this is always worth watching, but if you’re not a Cena fan, you may not enjoy it.

And then, the moment that nobody will ever forget from the PPV, or 2006 in general. Edge cashes in his Money in the Bank contract, allowing him a title shot against the beaten, battered and exhausted John Cena. This wakes the crowd right back up, and, apologies for the spoilers, Edge’s victory provides a huge crowd reaction. The ending of this match set the tone for three entertaining, and highly TV rated, weeks of Edge as WWE champion, before losing the belt again to the despair of the fans. This definitely ends the PPV on a high for myself, but on the other hand, John Cena fans might see this as a bad ending. All a matter of opinion.

After a shocking run of DVD extras, the NYR DVD picks up again, and we get four extras not seen on the PPV, although one is on RAW the next night.

All of these extras are fairly entertaining, and they all build on things that we see on the PPV, and that are furthered on forthcoming shows. They’re almost like a bridge that links certain things, although in theory you will not miss much if you don’t see them.

In conclusion, I certainly did enjoy the majority of the PPV, and the DVD extras certainly develop the matches from the show. However, many reviews of the PPV were different from mine, with criticisms of the matches not being good enough, and too much focus on backstage segments instead of having a more stacked card. The PPV really does split things down the middle, so if you’re more of a wrestling fan than a sports entertainment fan, I would think twice about buying the DVD. For sports entertainment fans such as myself, this PPV will be right up your street.