By TheBigBoot
WWE DVD Reviews
This page contains affiliate links. At no additional cost to you, we may earn a commission if you click through and make a purchase. Learn more 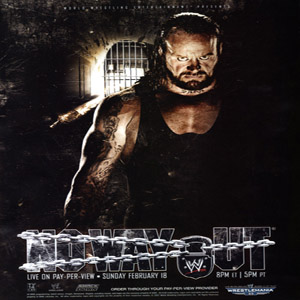 No Way Out is most memorable for two things: Firstly, it was the show where Michael Cole lost his voice. If you are a fan of JBL, you’ll be pleased to know you get to hear him do Play-By-Play and colour. Towards the end of the show Cole’s voice, which had been dodgy all night, finally packed in leaving Bradshaw to call the main event solo; Secondly, it turned out to be the final ‘single brand’ pay-per-view as post-WrestleMania the shows have all been ‘tri-branded’ (i.e. featured a mixture of stars from all three brands). Although it’s worth noting that even though this was officially a SmackDown! show it still had representatives from all three shows anyway. In fact the line-up pretty much makes a mockery of the entire brand split.

The opening ‘Inter-Promotional’ six-man pitted three of the most reliable workers on the roster at that time in U.S. Champion Chris Benoit, Matt Hardy and Intercontinental Champion Jeff Hardy against the rather cool trio of Joey Mercury, Johnny Nitro and Montel Vontavious Porter – the latter of whom really should have become a full-time stable as MNMVP. A good way to kick off the show, the match was given enough time to develop and built slowly to an action packed finish highlighted by Benoit delivering a double German suplex to both members of MNM.

The only drawback with lumping two the better rivalries of the time (Benoit vs. MVP, The Hardyz vs. MNM) in the same match was that the rest of the undercard was somewhat of a mixed bag: Although, I wasn’t a fan of the end result due to the amount of time Helms had held the Cruiserweight title (at that point he had held the belt twice as long as anyone in history and really deserved to have kept it until WrestleMania rather than losing it in meaningless fashion which benefited no one) the Cruiserweight Open itself was one of the better ‘Gauntlet’ type matches they’ve done thanks to crisp performances from Helms, Jimmy Wang Yang, Jamie Noble and eventual winner Chavo Guerrero; Whilst not a great match, or even a particularly good one, the comedy ‘mixed height’ match was far better than it had any right to be. Prior to No Way Out, Finlay had become the only person to defeat Boogeyman and (more importantly) the only person thus far to carry Boogey to something resembling a decent match. Here he was able to repeat the miracle and save what by all rights should have been a contender for worst match of the year; Kane against King Booker ended up being a solid match, although it was a surprise to see the feud itself end here after getting off to a big start at the Royal Rumble. Kane and Booker were on form here, resulting in Kane’s best singles match since Cyber Sunday 2006; Despite an energetic effort from LonDrick, the SmackDown! Tag Team title match only served to expose Deuce and Domino’s weaknesses when required to work matches longer than five minutes. (This was also the match where Cole’s voice really started to play him up); The ECW title match is fast-forward material. An overly long stinker, this was like a combination of their respective matches from the Rumble except with no rhyme, reason or reaction from the crowd; Vinnie Jones cut a promo for his feud with Steve Austin (which never happened); And finally, the Diva Invitational – designed to promote Ashley’s Playboy appearance – was thankfully kept shorter than it could have been.

Fortunately, the card peaked with a strong finish. Subdued through a lot of the undercard, the 14,000 at the Staples Center came alive for the main event. Hyped as “the biggest tag team match in SmackDown! History” Undertaker, Batista, Michaels and Cena played up the tension between themselves watching their own backs and wondering if/when someone would double-cross their own partner. Without spoiling the result, one of the participants did turn on their partner that night but before then we got a twenty-plus minute match that featured the rare opportunity to see Michaels and Undertaker pick up where they left off at the Royal Rumble, and John Cena and Batista go at it tooth-and-nail in the same arena they won their respective versions of the world title for the first time back at WrestleMania XXI.

The DVD contains three extras, the best of which is the star-studded eight-man tag which headlined Raw the week leading up to No Way Out. World Champion Batista, WWE Champion John Cena and their respective partners at No Way Out/opponents at WrestleMania XXII The Undertaker and Shawn Michaels take on four of the company’s top heels in front of a hot crowd in Portland, Oregon. With 13:50 shown this is probably the third best match on the disc (behind the opener and main event of the actual PPV) and well worth a watch. Also included is the post-match angle which leaves SmackDown! standing tall (for a change).

The other features are a little on the short-side: new Cruiserweight champion Chavo Guerrero Jr. offers his post-match comments regarding the Guerrero family legacy in relation to the Cruiserweight title; and the segment on Ashley Massaro’s Playboy photo shoot only lasts around one minute with comments from Ashley (“It definitely gives an overall appearance of, like, a good view of Ashley – for lack of a better term”) and photographer Arny Freytag (“Some people look good in person but don’t photograph well, but she looks good in person and then photographs fabulous”). For the record, no nudity is shown.

It’s fair to say the DVD would have benefited from including another match or at least a few more exclusive interviews here. Either of the tag team matches from the 16th of February edition of SmackDown! pitting John Cena/Shawn Michaels vs. MVP/Mr. Kennedy or Batista/Undertaker vs. Edge/Randy Orton (both of which were ***+) would have fitted in nicely.

TheBigBoot’s Most Memorable Quote: “I am sitting here at the Staples Center watching a horror movie and it’s not exactly a very good one. In fact it’s a bad one.” (JBL The Boogeyman and The Little Boogeyman made their entrance, No Way Out 2007, 18/02/07)

Sandwiched by quality tag matches featuring the very best from the SmackDown! and Raw rosters, the filling was distinctly average. I can’t call it a ‘bad’ show just an uneventful one.

Quality opener aside, No Way Out 2007 was an average show saved by an interesting main event which gave us the paying customers a chance to see the top four babyfaces in the company (at that point) go at it in one match. All four worked hard, took some bumps and we got a clean finish. In that sense it delivered and produced arguably the best WWE tag team match of the year. Beyond that the card provided some decent action, it’s just that very little of actual significance happened.