May 9th, 2002 was the day that Dave Batista made his WWE debut as the bodyguard for D-Von Dudley. His physique got him noticed, but there have been hundreds of large muscular men to show up and impress with their physical stature, only to disappear into the night having amounted to nothing. Over seven years later, it’s safe to say that “The Animal” didn’t fall into that trap. 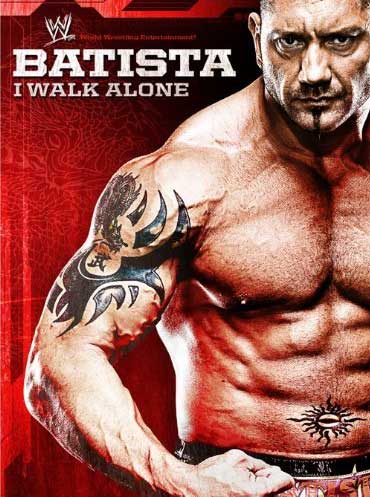 So why did Batista succeed where others have failed? The answer is both very simply and impossible to explain; he simply had “it”, that indescribable X-Factor that everyone needs to make it, but not everyone possesses. A natural charisma, a cool-as-f*ck attitude and the ability to look good in a suit are all part of what allowed Batista to become the mega-star that he is today.

In an interesting twist, his first official WWE match was against a young , clean-cut second-generation rookie by the name of Randy Orton. Deacon Batista (as he was known then) destroyed Orton, Jr. in less than a minute, capturing the attention of the fans in doing so. The association with D-Von didn’t last, though, and after defeating his “mentor” on the September 5th, 2002 edition of Smackdown, he was moved to RAW, where video packages heralded his arrival. On November 5th, 2002, Batista debuted on RAW and massacred Justin Credible. The following week, it was D-Lo Brown’s turn to suffer and the week after that, the seeds of Evolution were sown… but we’re getting ahead of ourselves, so let’s go back to the beginning.

The first few chapters of the DVD fill us in on the youth of Batista, where he grew up, how he never knew his father in his formative years and the trials his mother went through to put food on the table. There really is a lot of eye-opening stuff here, a lot of which is being told, officially, for the first time. We also learn that Dave was a member of the wrestling team in high-school. The documentary continues and we hear about Batista working out like a crazy man to build his body, the time he worked as a bouncer, becoming the go-to-guy if you wanted someone to watch your door for you in his town.

The story of how he met his wife is really sweet, but with a bitter taste, but you can tell that they were meant to be together and, even now, the way they talk about each other, they really should be together. Angie, his now ex-wife is a beautiful, sweet woman and she doesn’t have a bad word to say about Dave in any of her segments… ditto for Dave when he talks about her.

The wrestling part of the tale begins with Batista deciding that this is what he wants to do and, with a friend, natch, enrolling in the WCW Power Plant. Some people have spoken highly of the place, but the majority of reports are that the Power Plant sucked. Louis Theroux did a special on pro-wrestling that heavily featured the place and it seems that Sarge (Dwayne Bruce, the head trainer) had a chip on his shoulder. Bret Hart believes that the training given at the Power Plant was poor and in a 2004 column for the Calgary Sun, puts some of the blame for his career-ending concussion to those methods. Anyway, Sarge gave him a try-out and returned the assessment that Batista would never amount to anything in the wrestling business. Good call on that one, Dwayne.

The gears shift up as we move on to Batista quitting the Power Plant and moving again, this time to Pennsylvania and the Wild Samoans Training School. The difference in the philosophies and the trainers themselves is evident in the way Batista and Afa talk about each other… but before we get to “The Animal”, we need to visit The Deep.

Ohio Valley Wrestling is where the next step in Batista’s career took shape. The guys who were making their breaks in the business at the same time is quite impressive; alongside Dave, there was Brock Lesnar, Randy Orton, John Cena and Shelton Benjamin (looking scarily like Elijah Burke’s current persona). That’s an impressive list of names who went on to have great success in a WWE ring, each one holding championships and competing on the biggest card there is: WrestleMania.

Dave made his televised wrestling debut as Leviathan, a creature summoned from the depths of the Ohio River. Sure, it was as hokey as they come, but the character worked in getting him noticed, which is the main thing. It wasn’t long before WWE called and moved him up to the main roster, which takes us nicely back to where this review began.

From this point on in the DVD, everything should be familiar to most wrestling fans. Evolution was one of the greatest factions, each member being a perfect compliment to the others and giving the group a rounded appeal that a lot of the others factions who came and went didn’t have. Even though Orton was the first to leave, it was Batista’s exit that everyone remembers fondly and is arguably the reason he still headlines today.

The remainder of the documentary is split between his in-ring career going up and his family life tumbling down. The highs truly were high (stealing the show at WrestleMania against Undertaker and then following that with months of great matches against the Deadman), but the lows were really low (his family breaking apart and the emotional baggage that brings with it).

Covering seven years, there are a few repeat opponents, but the instances when that happens are mostly warranted (Triple H and Undertaker). The match from Ohio Valley Wrestling is pretty decent, while, from the rest, there is very little in the way of filler.

Stand-out matches are the two against Triple H from 2005, both of which were amazingly good, and the two against Undertaker from 2007. The WrestleMania match against ‘Taker is phenomenal (as is JBL’s commentary), surpassing pretty much everyone’s expectations, while the Cyber Sunday battle refereed by Steve Austin is an exciting end to that period of their feud. The bout against John Cena was an interesting one and, again, surpassed expectations going in.

The matches against Booker T didn’t do anything for me personally, but are a nice addition nonetheless, while the Cage Match against Edge is always worth a second viewing. The Royal Rumble win in 2005 is more memorable for the antics of Vince McMahon following the botched ending between Cena and Batista, but it was the first step in getting Dave into the main event and, more importantly, keeping him there.

All of the extras are on the first disc and are more like deleted scenes from the main documentary that actual extras (think of the matches as the extras in that regard), but they’re still worth a look. Stories from Batista’s childhood mixed with heart-felt tales of Eddie Guerrero and the generosity shown by sorely missed former champion.

A nice little group of talking heads to compliment the main story.

Much like some of the matches, this set exceeds initial expectations. The documentary is astounding and really does show us a side of Batista that very few of us have ever seen. Testimony from his friends and family, the guys he works with, the people who helped train him and everyone else in between give us an insight into the man behind the “Animal” gimmick and it’s an interesting 90mins.

The matches are, for the most part, worthy of repeat viewing, particularly the ones I singled out above and JR’s sound-bites are as effective now as they were at the time he said them (WrestleMania 21’s “The Beast has been unleashed…” is up there with the best of them).

In conclusion, this is another hit for WWE’s wrestler profile collection and a must-have purchase for Batista fans and wrestling fans in general. The contradiction in his on-screen character and who he is away from the ring is something to  behold.