After the terrible pay-per-view that was ECW December to Dismember, WWE certainly had some making up to do, to get back into the good graces of their loyal pay-per-view and DVD buying fanbase. Thankfully, they did so with this show, and then some. 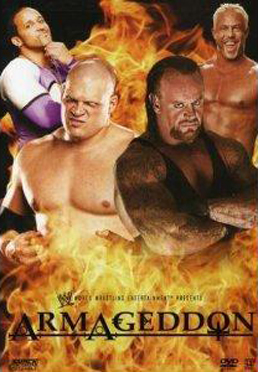 WWE Armageddon was a very good pay-per-view, highlighted by one of the matches of the year in a four tag team ladder match.

The opening match, featuring MVP vs Kane in an Inferno Match, wasn’t a good match, but it was a great spectacle, and even though MVP losing was a foregone conclusion due to the bodysuit he wears in the ring (the loser of the match was the first to be set on fire by their opponent), he gained a degree of credibility from losing.

Next match on the card was the highlight of the show, a four team ladder match for the WWE Tag Team titles, featuring Paul London & Brian Kendrick, William Regal & Dave Taylor, MNM and the Hardys. This match was added to the card at the last minute, and absolutely stole the show. It was the atypical stunt show for a ladder match in WWE, although with eight participants involved, the action was fast and furious, with jaw-dropping moves and spots aplenty.

Undertaker vs Mr Kennedy in a ‘Last Ride Match’ (basically an ‘ambulance match’, except you had to place your opponent in the back of a hearse instead of an ambulance to win the match) was an entertaining affair, featuring an arena wide brawl and the weapon shots and shortcuts that usually feature in Undertaker ‘falls count anywhere’ matches.

Next came an embarrassing segment featuring WWE divas in a lingerie dancing contest. They made the mistake of polling the live crowd to decide the victor. From the crowd reactions received, Layla clearly won, but Ashley was announced as the winner. Things got a whole lot worse when Big Dick Johnson showed up in a Santa Claus outfit and did his usual lame stripper dance.

One DVD extra on this DVD set. One! Do I really need to explain how pathetic that is? At least the extra in question was somewhat interesting – the first ever Inferno Match, pitting the Undertaker vs Kane, from the WWF Unforgiven 1998 pay-per-view. I always enjoy retro stuff, so this match – featuring a masked Kane, accompanied by Paul Bearer, and commentary provided by JR and Jerry Lawler – was very enjoyable, especially as I hadn’t seen it for nearly ten years.

Overall, I’d recommend this DVD, purely for the great four tag-team ladder match. Essentially it was a one match show, but that one match definitely delivered and is worth seeing. The lack of extras on the DVD smacks of laziness on behalf of WWE, but the one extra that is featured is something worth seeing if you’ve never seen it before.