This week I sat down and watched the DVD presentation of Armageddon thanks once again to those awesome people at Silvervision. Now I was looking forward to this although not being a big fan of the single brand Smackdown events from last year I missed the event when it was on Sky as did many due to it being on Sky Box Office. So if you didn’t fork out the £15 first time round, read on to find out if it is worth splashing out for the DVD. 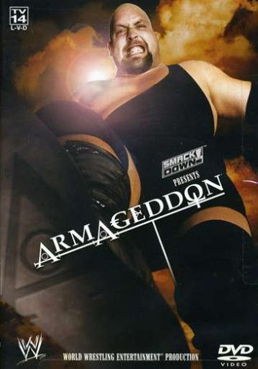 Armageddon came of the back of Survivor Series which was a hard act to beat but at least the event came at a time that people once again believed the WWE could produce another good PPV. The card looked interesting on paper with a 4 way for the title which saw Eddie Guerrero, Booker T and the Undertaker who all had a storied past with JBL trying to win his coveted title from him. With all the main event stars in one match would the undercard be able to pull off a decent event from top to bottom? Read on to find out.

The main high for this event was no matter how good it was it would go down in history as it hosted the final match of the $1 million Tough Enough competition. This pitted Daniel Puder and Mike Mizanin going one on one in a Dixie Dog Fight. WWE have always been interested and played with the concept of MMA and legitimate fighting which in the past has seen tough man contests with Butterbean and the acquisition of UFC’s Ken Shamrock in the late 90s. As it hadn’t been done for a little while it was interesting to watch and the match had a real sense of drama about it.

The Street Fight between John Cena and Jesus for the US title was an interesting watch as I hadn’t caught much of Jesus before the event on TV. If this had been a straight up one on one contest it would have lost my interest quite quickly but due to all the storylines circulating around the match with the stabbing and Cena’s comeback at Survivor Series the match kept the storyline developing nicely. Jesus gave a good brawling performance but I don’t have any wish to see him in a normal wrestling match as he still has a lot to learn. John Cena got some of the biggest pops of the night so it’s no surprise he is in the main event at WrestleMania 21.

Shock of the night came from the Big Show as he defeated Kurt Angle, Mark Jindrak and Luther Reigns in a 3 on 1 handicap match. I hate events that are too predictable so this really got me on the edge of my seat as I wasn’t expecting it, I had to watch the match again to make sure I wasn’t imagining it. This capped another inconsistent year for Big Show as the WWE still have problems deciding on how to use him.

The 4 way for the title was a good solid bout but not one that will be remembered as one of the best matches of 2004. I know Armageddon isn’t one of the big 4 events of the year but I think the WWE should always try and go out with a bang on the last main event of the year. You just knew the more they tried put the odds against JBL and make it look impossible for him to escape that he would somehow find a way of retaining his title which has been a trademark of his title reign.

The rest of the card was easily forgettable due to the number of main event stars used up in the main three matches. It was good to see the Basham Brothers back on a main event card but against the outfit of Holly and Haas they were hard pushed to get a decent match out of it. Rob Van Dam and Rey Mysterio were sent on first to get the crowd going but until we got near the end there wasn’t much else to cheer about.

This wasn’t the worst event I have ever witnessed but will be remembered for a couple of good matches and not a lot else. The WWE are in a hard position putting out so many events a year so I give them respect for putting on the event that they did, but if the WWE cut down the number of events they produced I think they could have done something better with this.