Armageddon 2007 comes off a very strong Survivor Series 2007 and builds on the happenings of that event. The headline bout is a Triple Threat for the World Title between reigning champion, Batista, his perennial foe, The Undertaker and Edge, the man who returned at the November PPV and cost ‘Taker the belt at the end of a brutal Hell in a Cell contest. 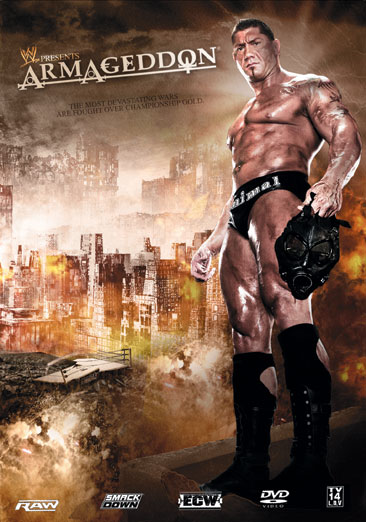 RAW had two main-event level matches on the card in the shape of Triple H v Jeff Hardy and Randy Orton defending the WWE Championship against the returning Chris Jericho. The rest of the card is filled out by decent to almost great matches that made Armageddon a very good end to WWE’s 2007.

The show opens with a fittingly gloomy voice-over/video package and then we’re straight into the action as Rey Mysterio attempts to take the United States Championship from Montel Vontavious Porter. The two men have a good match (although I do feel they could have better), but the real thing to savour from this entire event is that it will be the last time (for now) that you will hear JBL on commentary. For those of you who have read my previous reviews on this site, you’ll know how sad that makes me feel.

The match has some nice spots, but the early going is distracting due to MVP wearing a white doo-rag that looks like a cheap skull-cap. The one thing I did take from the match is that I hope Montel stops using the Playmaker (which it actually looks like he has done) and instead goes with the Shining Black as his finish. As it is, the end of this match is disappointing considering how good the in-ring action was to that point.

Straight after the opener, Jeff Hardy gives his thoughts on his upcoming match with Triple H. It’s a good promo from a guy not known for his speaking skills and sets up the tone for the battle he has ahead.

ECW makes their presence felt in the second match of the night as Kane and CM Punk team up to take on the massive combo of Mark Henry and Big Daddy V, accompanied by Matt Striker. One of the things I really thought was awesome during this was the entrance of Matt Striker’s men; with Big Daddy V’s awesome music playing across the airwaves, these two humongous men appear in the aisleway and just look menacing. The camera angles used really help show their size off to their advantage and the fact they walk down the aisle side-by-side (with Striker behind them looking tiny) just adds to it. If WWE ever get around to building the tag division again, this was a team who would be first in line for a push.

The match itself is decent, with Punk obviously being overmatched in the size department by his opponents. The team of V and Henry are the type of teams I used to love watching as a kid; huge men just throwing their weight around and almost toying with the local talent unlucky enough to be drawn to face them. When Punk is in the match, it’s like a flashback to a more innocent time; it’s only when Kane gets in do things go back to a semi-level playing field. The bout does go on too long, but the finish is beautiful and, in my opinion, a great example of how to book an underdog babyface champion going into a match with a man the size of Big Daddy V looking to take his title.

Unlike with previous WWE DVD releases, the backstage segments don’t have their own chapter listings, so you can’t just skip to them (if you’re that way inclined). The second of such segments is Edge making everyone lose their lunch as he declares his love for Vickie Guerrero. Fortunately, we are saved from the sense of nausea by Mr. Kennedy and his awesome entrance music (I still stand by my assertion that “KENNEDY!!!” will become this era’s “Glass Shattering” in regards to popping the crowd – not to say he will be as popular as Austin, just that the opening chant will have the same effect on the fans when it hits).

Kennedy and HBK had a series of matches in the month of December (debuting his new finish, the Mic Check, in the the process) and they have all been pretty good. This had the potential of being the sleeper match of the night, perhaps a strange claim to make considering it’s Shawn Michaels, but in the same way as HBK v Y2J at Wrestlemania XIX was the sleeper match of that show (most, if not all, of the focus was on Angle v Brock, HHH v Booker, Hogan v Vince and Austin v Rock III), this had the potential to steal MotN honours away from the main-events.

It doesn’t quite live up to the build I’ve just given it, but it comes close. Some great exchanges, a crowd who get into it (eventually), a sensible “game-plan” (Michaels works over Kennedy’s arm, Kennedy works on the “injured” back of Michaels) and well worked finish all make it a great match.

The WWE Champ gets his chance to air his views on both his match tonight and his potential opponents at Royal Rumble. Orton’s character at this point was phenomenal, with him playing the heel with relish and a dedication to being disliked that a lot of heels seem to forget.

The most intriguing match of the night is up next as Jeff Hardy takes on Triple H for a shot at Randy Orton the following month. WWE had done such a job of building Jeff since he gained the winning fall at Survivor Series, where before there would have been no doubt of the outcome, this time, it was open for either man.

The match itself starts of slow until Trips gives Hardy a hard slap to the face and tells him that he is here to fight rather than show respect and make friends. From there it’s pretty much a squash match until the finish sequence. My main gripe with this contest is Triple H’s aftermatch reaction; there is no way a man who claims he lives for the championship should be smiling in these circumstances.

Khali should be allowed to cut promos on every show he appears on (and do pre-tapes on the shows he’s not on), as the man is hilarious when going on a rant.

The return of Chris Jericho was the ultimate show of hype and, for the most part, his RAW appearance to end the “Crack the Code” angle was a success. Unfortunately, he hadn’t shaken off the ring-rust completely by the time this match came around and as such, it wasn’t as good as it could have been. The crowd reaction for the Walls of Jericho is immense though, and goes to show how an over hold/move is sometimes the difference between a wrestler and a star. My only real gripe, and it’s more a personal annoyance, is that this is where JBL decides that the announcer’s chair is not for him. God bless you, John, the Smackdown commentary table will miss you.

WWE may have missed an opportunity here, as the fans reaction makes me believe that they wanted Jericho to become the champion and that he was over enough to do so. Whether things would have been better than they were is a matter for debate however, and perhaps Y2J’s current heel run is better for him overall.

As has been the case many times before, the Divas are used to break up the two headline title matches (usually as the match won’t be as good as the ones before and after) as Mickie James tries to win the WWE Women’s Title from Beth Phoenix. As a pre-match “treat”, Jillian Hall gives us a song that is as good as you would expect from the tone-deaf character.

Beth looks the part as the champion, and seeing as how her and Mickie haven’t had a bad match, I was looking forward to seeing what they could do when I watched this show live. Both men are used to their strengths, with a sweet double chicken-wing submission and a powerbomb counter by the “Glamazon” being a highlight. Mickie gets to show her plucky underdog-ness (it’s a word) and Beth gets to overpower her opponent at every opportunity. The clean win was also a nice touch.

As much as I love Tazz, both as a wrestler and a commentator (especially when he shoots like he did on the recent Draft RAW), he is not a patch on JBL and as such, the match does suffer a little bit because of it. All is not lost though, because any match featuring Edge, an on-fire Batista and The Undertaker is going to be good.

The lead-up to the match is shown in a hype video that only WWE can do, and showcases the HiaC return of Edge, his subsequent alliance with Vickie Guerrero and the fantastic turn-around where Teddy Long used Vickie’s own words against Edge to insert Undertaker into the Armageddon match.

With all that out of the way, it is now time for your main event of the evening with referee Mickie Henson in charge of proceedings. The three men put forth an awesome 15mins of action, with each of them having chances to shine and no-one being jobbed out to the detriment of the others.

Tazz and Cole do a good job on commentary and the fans are really into it from bell-to-bell. Batista still has the working boots from Wrestlemania 24 on and Edge doesn’t look out of place among the two giants. The usual three-way formula of finishers being hit/applied only to have them broken up by the third man is on show (but even that makes sense under the circumstances – and one of the ways Edge does it is inspired), and there are some great spots on show (including Batista’s awesome spinebuster counter to “Old School”. But all of that pales into nothingness when compared to the fantastic finish and the creativity involved. To say I was impressed by the finish is an understatement; it really was that good.

There is only one extra on the disc, but it is a pretty good one that has a decent running time (I hate it when the only extras you get are thirty-second “exclusive” interviews and nothing more). Taken from the 15th Anniversary edition of Monday Night RAW, it has Vince McMahon telling us who the greatest superstar to grace a RAW ring is… and it turns out to be Mr. McMahon himself.

What follows is WWE at its finest, with Mankind, Undertaker and Steve Austin making an appearance before the entire WWE roster (including special guests) enter the ring for a celebration of the longest running wrestling show (and the longest running serial show in television history).

It really is a fantastic moment, with a lot of old faces making a one night only return.

Armageddon is a fitting end to a stellar 2007 for WWE. There isn’t a bad match on the card (some disappoint due to the talent on show, but they’re still worth watching). Kennedy has his best match in the company to this point, the Divas put on a great wrestling match to silence the critics who claim the WWE Divas are only good for swimsuit competitions, Jeff v Triple H is an edge-of-the-seat ride to the end and the main-event is awe-inspiring with all three men on fire throughout.

Buy this, along with every other PPV from 2007, to remember the best year WWE has had since 2000.