By Mark Collins
Wrestling Book Reviews
This page contains affiliate links. At no additional cost to you, we may earn a commission if you click through and make a purchase. Learn more

What can we say about Shawn Michaels that no one’s ever said before? That he seems like a genuinely nice guy? Maybe not, and “his” book “Heartbreak and Triumph” does nothing to dispel or disprove the idea that he’s a far-from-genuine sort of guy. I put “his” in inverted commas because it’s not written by him at all – it’s written by a chap called Aaron Feigenbaum. Why they call these books “autobiographies” when switching the text to the third person and calling them “authorised biographies” would be far closed to the truth, I don’t know. 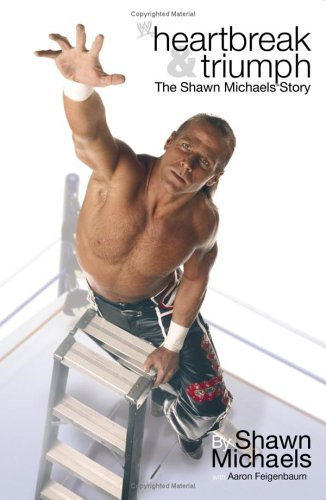 But back to the plot… or lack thereof. As I mentioned, this book does nothing to change your opinion of Michaels. Actually, we need to add the caveat – “if you already know a lot about him.” For someone who’s never been a great viewer of wrestling and has little prior knowledge of Michaels inside or outside of the ring, you’ll come away feeling that the book is a pleasant enough read – quite enjoyable, infact – if a little lightweight. The mark in me feels this way – this is a fairly well written, fairly enjoyable tome.

Fairly. For only six letters that’s a big ol’ word when it comes to the “smark” side of my personality. Michaels, or rather his biographer, puts a lot of emphasis on his born again Christian lifestyle and outlook so I’d expected to read a story of a very humble man reflecting on a somewhat patchy (in terms of morality and ethics) lifetime. Instead, what I found was that his platitudes seemed empty and his statements of regret lacking in credibility. Maybe it’s the “ghost-writer” syndrome – I do find it difficult to take a ghost-written book to be the absolute truth. As a comparison, Mick Foley’s two autobiographies – “Have a Nice Day” in particular being the benchmark for wrestling books – simply reeked of honesty (as well as awesomeness). Whether you agreed with Foley’s views or not, and the Internet Wrestling Community has a growing contingent of Foley-haters, you knew these were his genuine thoughts. From the tone of voice used in the book, to the very real self-deprecation, you believed what Foley wrote.

Michaels’s book, though, lacks that authenticity of opinion. Maybe it’s down to it being ghost-written and my mistrust of the practice. Maybe it’s down to the lack of room, the book being less than half the length of Foley’s first. Maybe it’s down to Michaels simply not being a nice chap. I’d be inclined to go with the second option, along with a soupcon of the third. The book needs to rush through the various stages in his life and, as such, never really does justice to any of them. It’s unable to deal with Michaels’s ups and downs fairly and that’s what really seems to be missing.

Upon first picking up the book to read I found it quite a guilty pleasure. Guilty, because I’d expected to thoroughly dislike it. Pleasure, because the first few chapters slipped down easy like a cold glass of water on a hot day. After a while though, one yearns for something more of a challenge – as one of Jesus’ disciples, Paul, said, (and we know Shawn is a big fan of JC – although I’m of the opinion that Shawn might think that statement’s the wrong way round) “No longer drink only water, but use a little wine for your stomach’s sake…” – I’ll admit that as I progressed through the book I found that I was yearning something a little stronger than a laundry list of his achievements and lip-service being paid to his failings.

Overall though, I still recommend this book. I recommend any wrestling book, good or bad, simply because the more information that you have access to about something the more you’ll understand it. Whether that information is good, bad, factually correct or pure opinionated nonsense, the more wrestling books you read the better-rounded your knowledge of the business becomes and the more able you become to see peoples’ opinions in an informed light.