Oh those Golden days of wrestling, when Saturday afternoons were spent trying to kill two birds with one stone. On one hand you were tuned into ‘World of Sport’ at 4pm trying your hardest to keep up with the latest second half footie scores, while at the same time wondering if Kendo Nagasaki was ever going to get unmasked – little did we guess he’d end up doing it himself!

The Grapple Manual: Heroes and Villains From the Golden Age of World Wrestling by Kendo Nagasaki 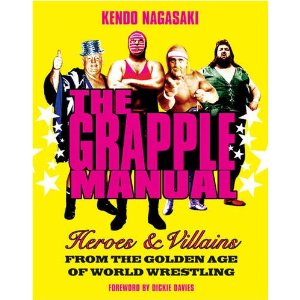 2005 is proving to be a great year if you want to remember those Golden days of British wrestling when stars such as Jim Breaks, Johnny Saint, Marty Jones and of course Nagasaki, Haystacks, McManus and Big Daddy thrilled us every Saturday afternoon. We’ve already had the ‘Best of ITV Wrestling’ DVD and now comes The Grapple Manual: Heroes and Villains from the Golden Age of World Wrestling’ by Kendo Nagasaki.

As the title suggests this doesn’t just look at British wrestling. As well as looking at the usual British suspects (Daddy, Haystacks etc), there’s also Jim Breaks, Robbie Brookside, Klondyke Kate, Mark ‘Rollerball’ Rocco and Marty Jones. Then there’s the American stars who will undoubtedly add sales to the book, wrestlers such as Hogan, Savage, Flair, Roberts and The Rock, though I think the latter is perhaps a bit too current to be included in the Golden age.

The book begins with a foreword from Dickie Davies who presented ‘World of Sport’ for many a year and he recalls the popularity of wrestling on a Saturday afternoon. That’s followed by an introduction by the legendary Kendo Nagasaki. He recalls how when he came into wrestling it “was a tough, tough world, one of ‘spit and sawdust’, his opponents were ‘physically hard’ and it was “less about showbusiness and more of a fight attitude.” He contrasts those days with the modern high-flying world where “very skilled men” take “a lot of risks.” Then Kendo goes onto a fascinating look back at that classic encounter in the 60s which saw Count Bartelli lose his mask and Kendo forever gain his reputation as a great wrestler.

It’s onto the meat in the sandwich now as the book takes a look back at all those great wrestlers from the past, some of whom (Brookside, Klondyke Kate, Hogan and Flair amongst others) are still fighting to this very day. The general format is a full page of photos of the star in question (mainly from the massive collection of Russell Plummer) accompanied on the facing page by a potted history of the star. Obviously it’s not easy to tell the story of someone like Hulk Hogan or Mick McManus in five or six paragraphs but newcomers to the sport are going to learn a great deal from this book.

Surprisingly the Kendo Nagasaki biography leaves out details of his famous unmasking ceremony but there are some insights into his character and details of his career and the recently repeated ‘Masters of the Canvas’ programme. As well as all the biographies there’s some charming cartoons which depict and explain exactly how to perform a Pile Driver or a Kamikaze Crush, but don’t try them at home whatever you do.

This is a charming book and a perfect present. Ok if you’re an expert you might not learn too much new from this but it’s still a great addition to your ever-growing collection of wrestling books. It’s also brilliant for bringing back those memories and I have to admit to being more interested in the British side of the book than the American, but that’s probably because of the historical content and my undying wish for those days to return. Memories of stars such as Catweazle, Pat Roach and Count Bartelli come flooding back. It’s a shame that the book isn’t bigger but the text, written by Rob Cope, is excellent and the last page of the book definitely sets us up for a sequel if the interest is there as I’m sure it is. Bring on Johnny Saint, Les Kellett, The Royal Brothers, Jackie Pallo, Steve Logan, Kung Fu and of course great American stars such as Terry Funk, Dusty Rhodes and Sting.

The book costs about £7.99 and is published by Wiedenfield and Nicolson who are part of the Orion Publishing Group. Kendo Nagasaki and Lloyd Ryan will be signing books at bookshops this month including Ottakar’s in Burton-on-Trent, Staffs, at 1pm on Saturday 17th September 2005.