Thanks once again to those good people at Silvervision it’s review time once again. This time I will be looking at the latest release in the ongoing Divas series which sees the Divas from the WWE sent to various tropical locations around the world to pose for photos and to share their stories with the WWE fans. This time the Divas invade the hot beaches of Mexico as we get introduced to some of the new faces on the Diva scene and learn some more about our familiar favourites. 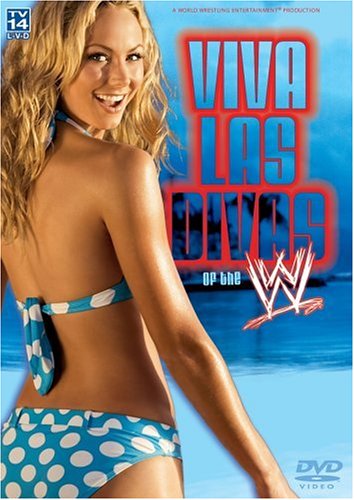 Thanks to the WWE Diva Search competition there has been an influx of new young faces in the women’s division of the WWE. It’s not just Christy Hemme we have to look out for and this time we are also graced by our favourite WWE ring announcer Lillian Garcia! So there was something to look forward to for everyone especially the adolescent teenager who this series is very popular with.

This DVD was slightly different to others as instead of just being separate chapters skipping straight from one diva to another we have everyone’s favourite The Coach providing us with some comedy moments in between the features on the divas.

They balanced the DVD with having the established Divas Stacy, Trish, Lita etc. getting more time than the new Diva search competitors which I thought was right. Some however may disagree as they may want to find out about them more than the established stars they know all about but like I say to me it was right as that’s how it works on Raw and Smackdown as the top stars get more TV time than the lower card guys.

The Internet fans will not be happy with this release as there is a strong following of Molly Holly (now released by the WWE) on the forums but she doesn’t feature on the DVD. Fans will argue all day long about who they think is the nicest diva so I won’t get in to the debate of Molly Holly against the other divas but it was a shame that she wasn’t there.

It was good to see more than just the photo shoots and what happens on them this time round as we saw the divas enjoying the local culture and activities. One thing which must be said is that you have to watch the section when they all get on ATV’s now I won’t get in to the debate of which sex makes better drivers but divas on ATV are lethal.

One thing which is always good on divas DVD’s are the extras and this years are no exception as they have some of the top diva matches of the year, interviews, behind the scenes footage and much more that will keep you entertained for hours. Many fans are disappointed the first women’s cage match between Lita and Victoria didn’t make it in to the extras but like I say there are more than enough extras to keep you happy.

I think it is good that the women’s division has its own separate DVD series. It is good that they have a yearly DVD which is like a review of their year in the WWE and it is a good money making tool for the WWE which gets in an audience demographic they are looking for and it is a very different DVD to others they release.

When you have seen so many Divas DVD’s it gets hard to pick and choose between them or at least differentiate them. You will always come across the same argument of after you have seen one divas DVD how do you top that one and get more interest in it? The format and ideas may still be basically the same but the production is a lot better in my opinion and as long as you keep cramming in a ton of extras it will be a must have for every diva fan like the “One of a kind” DVD is to any RVD fan. Though saying that I’m partial to the “Divas in Hedonism” release but like I say its personal taste.

The good thing that can be said for the Divas is imagine if they ran this series in the 80s and the 90s with the likes of Mae Young, The Fabulous Moolah and all those girls from WWE past joining in the fun at least now the WWE have some sizzling hot girls to keep the male population happy but if Mae Young and Moolah are your thing who am I to judge?