Hey Ho folks, welcome to another Video Vault review, now I know its been a while since I last delved deep into the archives of the wrestling world, but in this installment I intend to make up for lost time by reviewing one of the best WWE events ever. As the countdown to this years Royal Rumble starts, I thought it only right to take a nostalgic look into the history of Royal Rumble events and try find the best Royal Rumble ever. The task wasn’t hard at all, its one of my personal favourites and easily the greatest Royal Rumble ever. 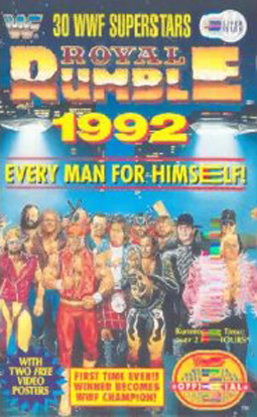 Here is how the whole card looked:

The Royal Rumble 1992 was one of the most star studded Rumbles ever, with the likes of Randy Savage, Jake Roberts, Sid Justice, Roddy Piper, British Bulldog, Hulk Hogan and of course “Nature Boy” Ric Flair all taking part. Unlike previous Royal Rumble events, the winner of this event would not get a shot at the WWE Championship belt at Wrestlemania, No; the winner of this Royal Rumble would win the WWE Championship Belt. This all came about at the “This Tuesday in Texas” event, where Hulk Hogan took on The Undertaker in a WWE Championship match, Hulk regained the belt, but he cheated to do so, so current president at the time Jack Tunney, announced the title vacant, and the winner of the Rumble match would be crowned Champion.

The event also had an Intercontinental Championship Match featuring Roddy Piper taking on existing champion The Mountie. A few days prior to the Rumble, Bret Hart had lost the Intercontinental belt to The Mountie at a non-televised event, due to Hart suffering from a range of injuries and a bout of the flu. Mounite picked up the belt, but “The Hot Rod” came into the fray and the match was set for the Rumble.

Looking at the card it actually looked pretty poor, with 2 tag team matches which would be average at best, a Tag Team Championship match that wasn’t really going to set the world on fire and an Intercontinental Championship match which really didn’t have much build up and as a match probably wasn’t going to be a technical showcase. The Rumble match itself was really going to have to be something special or this PPV would just became another to be missed.

The show kicked of with Owen Hart and Jim Neidhart as the New Foundation taking on Mr. Fuji’s team of Kato and Tanaka the Orient Express. Owen starts off with Kato and they do some mat wrestling and a nice little sequence to get the crowd pumped and on their feet. Owen nails a slingshot manoeuvre off the top rope and he gets a two count. Owen tags in Neidhart who goes to work. The match continues with the Foundation controlling the match for the most part. Then the Orient Express guys take control with the use of Mr. Fuji’s cane, the match continues with the Express beating down on Owen. Fuji sets the cane into the turnbuckle and Owen is thrown chest first into the turnbuckle. Owen continues to get beaten down until he manages to get enough strength to tag in Neidhart who powers his way with shoulder blocks to the Express, Owen and Neidhart hit the Rocket Launcher for the victory. Not a bad match, although personally I think it lasted too long, however the crowd were well into it, overall not a bad way to open up the show.

As we move on we are shown what went down in Springfield when Bret Hart lost his Intercontinental Championship to The Mountie, and the setting up of the Piper vs. Mountie match. This match is pretty much a brawl from the start with Piper punching and brawling with the Mountie to avenge Bret Hart and capture himself a championship belt. Piper controlled the match until he whipped Mountie in the ropes and missed a drop kick. Mountie gained the control and took it to Piper, he controlled Piper for a while until Piper came back and brawled. Piper threw Mountie over the tope rope but Mountie held on while Jimmy Hart jumped on the ring apron. Mountie came running at Piper but Piper moved out of the way, and Mountie collide with Jimmy Hart thus letting Piper hit the Sleeper on The Mountie letting him get the victory. Jimmy Hart came running in with Mountie’s cattle-prod but Piper grabbed that, and nailed the Mountie with it. Overall this match was pretty dire, but the emotion was so high. It was probably one of the best Piper moments ever. The crowd was so loud and really were behind Piper. Average match, but one of those moments that you will remember for a long time.

Tag Team Championship match now as Animal & Hawk take on The Natural Disasters. Match starts off with Hawk and Typhoon, Hawk tries to knock Typhoon down with a series of running shoulder blocks. Earthquake gets the tag in and Hawk brawls, ‘Quake then misses a drop kick attempt and Hawk tag in Animal. Both men brawl with one another and Animal attempts to slam Earthquake but his knees fail him and Earthquake get the two count. Match continues for the most part with the advantage going from one team to another. The match goes outside with all four men brawling. The referee then counts Animal and Hawks out as the Disasters make it back to the in time. The Natural Disasters think they won the belts as well as the match, however LOD come in and attack them with a chair, as LOD are announced still the Tag Team Champions. Pretty normal type of match you can expect from the Legion of Doom and the Natural Disasters, ok for what it was.

Its now time for the Rumble match, featuring 30 men battling it out for the WWE Championship. WWE President at the time, Jack Tunney officially starts the match. The first official competitor is Davey Boy Smith, and number two is Ted Dibiase . Ted goes for Bulldog and attacks him, he throws him over the top rope, but Bulldog land on the ring apron, and then nails Ted with a clothesline over the top rope. Number 3 is Ric Flair to the dismay of “The Brain”. The Rumble had all sorts of superstars from Piper to Savage, from Slaughter to Jake Roberts. The final four were Ric Flair, Sid Justice, Hulk Hogan and Randy Savage. Flair and Hogan battle with each other, in the turnbuckle giving Sid the opening to throw the Macho Man over the tope rope. As Sid recouped, Hogan has Flair peering over the tope rope, and Sid takes advantage and pushes the Hulkster over the top rope, letting Flair escape. As Hogan got up in dismay on the outside, Hogan and Sid exchange words, and Flair sees the opportunity and throws Sid Justice out to win the Rumble and become the WWE Champion. After the Rumble, Flair does an acceptance interview like only he could. The whole Rumble from start to finish was excellent, I don’t really think anyone would disagree that “Nature Boy” deserved the win, the WWE booked the match so well it worked great for Flair. And whether you liked him or not, you knew that Flair deserved to win and become WWE Champion.

Overall this is the best WWE Royal Rumble in my opinion. The actual show as a whole is not the best in the world, as the tag matches between LOD vs. The Natural Disaster and the match between the Bushwhackers and Beverley Brothers were pretty dire. The Roddy Piper vs. Mountie match was a dismal match wrestling wise, but to see Piper get the belt was awesome, I still find it hard to believe that is the only major belt he has ever won. The Royal Rumble match was excellent and the way Flair won the belt was first class. Overall this event is a must see piece of WWF gold, and the Royal Rumble 1992 is simply Ric Flair’s night.