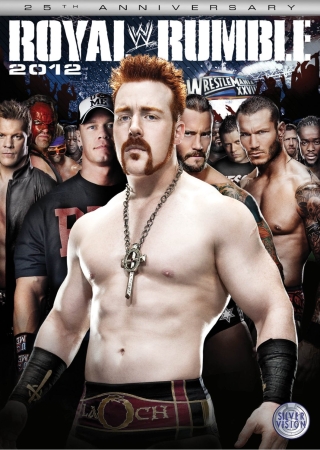 Opening up the show was the ultimate underdog situation; a David v Goliath v Goliath if you will. To add to the “how the Hell will Daniel Bryan get out of this one” feeling, the bout was contested inside the confines of a Steel Cage. The subtle turn to the heel side of the fence for the former American Dragon had been vastly entertaining since he relieved Big Show of the World Heavyweight Championship at the TLC PPV. Managing to squeek past both Show and Mark Henry in the following weeks led us to the three-way match that begins the 2012 Royal Rumble.

It should be noted that Henry was carrying a few injuries coming into this match (hence him losing the belt at TLC), so he should be commended for the effort he put in. That being said, the majority of the bout was Bryan and Show, with both men working very well together and pulling out some great spots leading to the finish… which was also a well-worked piece of genius booking that kept both champion and challenger strong going forward.

The Eight-Woman Divas Tag Match was really just an excuse to get as many females on the show as possible, so the 5min running time was fine for what this was; some face time and a chance to earn a pay day. Full credit to the heels for also being completely colour co-ordinated.

Third match in was a disappointment as Kane fought John Cena to a lame double count-out that led to a rematch at the following PPV. Kane had returned from (a self-imposed?) exile, re-masked and hell-bent on destruction. The metal mask he wears during his entrance actually adds to the character and it was nice to have “my” Kane back again.

However, as Cena was facing Rock at WrestleMania, there was no way he could lose to Kane, so there was a lack of jeopardy whenever “The Champ” appeared to be in trouble. Add in the pre-match arrival of Zack Ryder (who Kane had pretty much crippled on the preceding RAW), and you kinda knew where this was going before the opening bell.

That being said, it was interesting that none of Cena’s comebacks actually worked as Kane cut him off every time.

What isn’t interesting is the continued burial of Drew McIntyre. Looking at the career paths in WWE of Sheamus and Drew makes this reviewer sad when I can remember how they worked the UK and Irish scenes together amid their blistering rivalry. I’m all for Brodus Clay getting the big push, but not at the expense of a guy who deserves much more than his current “role” in the company.

Similarly, Dolph Ziggler must ask himself what he has to do to stay out of the mid-card mediocrity pit. At last year’s Royal Rumble, he found himself in a World Championship Match against Edge and although he lost, he had an amazing outing and came out stronger (Edge deserves a ton of credit for that). Following that match, Ziggler got lost in the shuffle (even having his trademark blonde hair cut short and dyed brown) until he eventually got himself back in the hunt due to his in-ring showstealing efforts.

Unfortunately for him, his match for the WWE Championship against CM Punk was overshadowed by the Special Referee stipulation and John Laurinaitis angle. Dolph and Punk had a great match, with the near-fall from the Fameasser counter to a GTS attempt being unbelievable, but with the shenanigans of Johnny Ace at ringside, Punk actually beat Dolph four times… meaning Ziggle pretty much was totally jobbed out come the final bell.

A great match marred by the stipulation… DZ deserves better and hopefully, with the current “I want to break free” storyline he finds himself in, we may just get it.

This leaves us with the Royal Rumble Match to salvage some pride and, unfortunately it doesn’t quite cut it. Apart from a few nice surprises (I literally LEAPT from my seat when Road Dogg’s music hit), Miz being the “iron man of the night”, Kofi’s handstand walk, Kharma, Santino/Cobra v Foley/Socko and Cody making it his personal mission to eliminate the legends, this was a disappointing Rumble match with no real drama, no real excitement and a lacklustre finish that tried to echo HBK v Undertaker’s closing epic… and failed miserably.

On a side-note, as funny as it was to have all three announcers pop in at different times, it did mean that three men on the roster had to do without a spot in the Rumble.

You get the sense WWE changed the finish simply because people had “guessed” Jericho was going to come out on top and the night suffered because of it. Sure, it’s worked out for Sheamus since then, but at the time, this was the very definition of “meh”.

On a side note, if you buy the Blu-Ray edition, you get both RAW and Smackdown from immediately before the event in their entirety.

This has to be considered as a major disappointment, with three of the five undercard matches not really worth the effort, while the two championship matches were marred by either the stipulation or the need for the feud to continue. This leaves the Rumble itself (which was back to 30 entrants) and repeat viewing hasn’t been kind at all.

When I watched this the first time, it was alongside my 5yr old son who has just discovered wrestling and who cites the Rumble match is his favourite on the WWE ’12 videogame. Because of this, I thought introducing him to WWE on TV starting from the Rumble would be a good idea… and it was as Josh absolutely loved the Rumble Match.

Because of that memory, this release gainst two review points just for that. The videos hyping Rock and Cena’s match at WrestleMania also gain a point too as they were awesome.

The extras are lame (as is customary on PPV releases), although Blu-Ray owners also get -: