Hello once again, its time for another review of the WWE’s latest VHS and DVD releases. In this instalment I’ll be looking at one of the most popular PPV’s in the WWE calendar, the Royal Rumble! The Royal Rumble is the annual event that sees 30 Superstars battle it out for that prestigious place in the main event at WrestleMania. Past winners of the Royal Rumble have included greats like Steve Austin, The Rock, Ric Flair and Hulk Hogan, but who would be triumphant this time round? Would this years Royal Rumble be something that will stick in our minds for being great, or would this Royal Rumble be a “Royal Cock-Up” by the WWE? Find out… 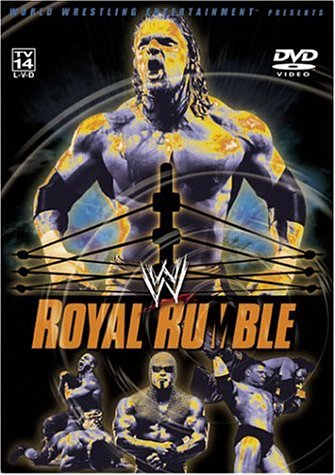 Lets a have a look at this PPV card:

The 2003 Royal Rumble was quite special as it was the first rumble which saw the superstars of the WWE representing their respective brands as we seen 15 of both Raw and Smackdown superstars compete for the prize spot at WrestleMania. On RAW’s side we see the likes of Chris Jericho, Kane, Booker T and RVD all compete with the Smackdown superstars such as Eddie Guerrero, John Cena, Edge and Matt Hardy. Plus even before the Rumble match had begun, two Smackdown giants would do battle as Brock Lensar and The Big Show would compete against one another with the winner getting a spot in the Royal Rumble.

Both brands World Championships would be on the line, but in two very different matches. On RAW’s side, Scott Steiner would compete in his WWE PPV return match taking on World Champ Triple H in a match that should be very, erm, lets be nice and say interesting. On the other side of the WWE locker room Chris Benoit would compete with Kurt Angle for the WWE Championship in a match that undoubtedly would steal the show, but to what extent? Find out!

The Royal Rumble is always my second favourite PPV in the WWE Calendar, the favourite being WrestleMania of course. With so many memories from past Royal Rumbles, like when Ric Flair won the Royal Rumble and the WWE Championship in 1992, the WWE Championship match from 2000 where Cactus Jack fought Triple H, as well as so many other great matches, its hard not to get excited about this PPV, however this year it was different. The PPV card looked dull and rather boring with only one match to really look forward to, that being Benoit vs. Angle.

Anyway the PPV kicked off with Big Show vs. Brock Lesnar. This bout may not have had everyone on the edges of their seats but it sure was a decent and solid opening match. The match was pretty slow paced and the in-ring action was limited, however it was better than I expected and the match was enjoyable. Once again the WWE proved that they want to get their moneys worth out of the 500-pound giant, and they are certainly using him to his full potential in my opinion. I think the winner of this match was quite clear before the bout began, and when Brock hit the F5 it was certain. Overall nice opening match, which was overall a decent encounter.

Next up, The Dudley Boyz vs. William Regal and Lance Storm. This match was pretty good, although it was more RAW material than PPV stuff. The brothers Dudley worked well and has some good chemistry with Storm and Regal, however the match didn’t really have anything special to offer. The ending came when Regal went to use his trusted brass knuckles but walked right into a 3-D, D-Von grabbed the brass knuckles and laid out storm to get the pin. Yet another title change for a pair of tag team belts that become even more worthless day-by-day. Dawn Marie and Torrie is next, and this is another great waste of PPV airtime. The match was extremely poor and I can’t say I want to watch that ever again.

Talking about things not to be watched, Scott Steiner vs. Triple H. This has to go on record as being one of the worst world championship matches in WWE history. When Triple H left back in 2001 with an injury he sustained in a tag match along with Austin, Benoit and Jericho, he took he wrestling ability with him, the only thing is, when Triple H came back in 2002, he never brought any of it back, and his ring work has seriously suffered, and this match was a prime example of that. Now don’t get me wrong, its not all Triple H’s fault, in fact Scott Steiner should be the person to point the finger at, because he sucked worse than Triple H, and believe me that’s bad. Anyway the match was terrible, Triple H struggled to pull of the most basic of moves and Steiner, well he didn’t even known the most basic of moves. The match had a consistent flow of punches, slaps and horrible suplexes, not to mention a powerbomb that nearly broke Triple H in half. Steiner struggled with the match, he was exhausted early on, and Triple H wasn’t moving around fast. As for Hunter, well I don’t know what’s happened to the man, one time he could have carried Steiner to at least a watchable match, here though he was barely able to carry himself. The only reason to watch this match is to see how bad it is.

From one extreme to the other, from dire to excellent. That’s the different between the RAW Championship match, and the Smackdown Championship match. As Chris Benoit and Kurt Angle hoisted the flag for Smackdown it became clear why these two guys are clearly two of the greatest ever wrestlers to set foot on the soils of the WWE. The Smackdown World Championship match was pure excellence as Chris Benoit battled Kurt Angle. The match was full of pure wrestling, and not just that; it was full of emotion, something that is rarely seen by WWE fans. With hold after hold, after hold this match went back and forth several times, and it was a joy to watch. This match was clearly the best Angle vs. Benoit match out of all the two encounters the pair have had. It stole the show, and the standing ovation Chris Benoit received at the end of the match is a testament to his skill and his ability as a pro-wrestler.

The Royal Rumble Match now, with 15 competitors from RAW and 15 from Smackdown battling it out for the main event spot at WrestleMania. This was enjoyable to watch but wasn’t anything special. It was clear who was going to win as in the build-up, it was really only between Brock and Big Show, and when Big Show lost the match earlier on in the evening it was a one horse race from their. Only things worth noting is that HBK was eliminated more or less straight away by Jericho, Jericho had a small push in the Rumble only to be eliminated by Test when HBK interfered, and Undertaker made his return to the rumble, and he along with Kane, Batista and Lesnar were the remaining four men in the ring, with Brock surviving and winning his first Rumble. Overall good stuff, but nothing really special about it.

This was a really poor way to kick off the WWE’s PPV year, and especially for RAW. With Steiner and Triple H having one of the worst World Championship matches I have seen in a long time and with the not so impressive tag team title match there was a lot of improvement to be made. As for Smackdown, it was a fair effort, apart from the Women’s match, which I could have gladly done without. The Smackdown Championship match was first rate and clearly stole the show. Overall the PPV wasn’t to bad, but could have been a lot better.

The DVD extras are nothing special and don’t really give you much of an incentive to purchase the DVD. Its not a must buy, but it certainly nice to have Chris Benoit vs. Kurt Angle in your Video or DVD collection.