Before They Were WWE Superstars 2 Review

Hello folks, its review time once again and thanks to those people down at Silvervision.co.uk I have a treat in store for you, I have been sent a copy of “Before They Were WWE Superstars 2”. If you’re unfamiliar with this series, the WWE take us on the journey of certain WWE superstar on their rise to the top of sports entertainment. In this instalment the WWE takes us into the lives of Brock Lesnar, Tazz, John Cena, Shawn Michaels, Chris Nowinski, Al Snow, Randy Orton, Chris Jericho, Torrie Wilson and Rob Van Dam. 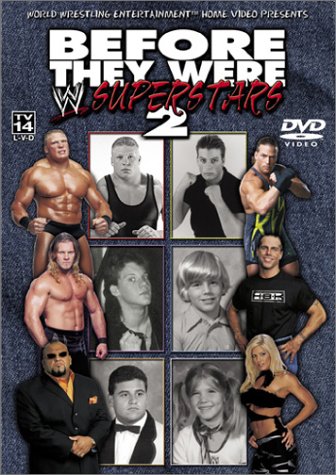 Sometimes the WWE make a mess up of these “real life” biographies, and then sometimes they surpass themselves by releasing some really good stuff. The most notable examples are firstly the Kurt Angle VHS release from a few years ago, it was absolute garbage, and then on the other side of the coin, just last year the WWE released “Hollywood Hulk Hogan: Hulk Still Rules!” which was probably was of the greatest WWE releases in recent history. So it’s hard to tell what quality of programme the WWE will release. That’s why I was highly spectacle of this release. Anyway, I decided to brave the elements of the WWE and review this Video/DVD release for you good people so you wouldn’t be wasting your hard earned cash, so lets find out if this was any good or not.

Well people, I can tell you this, I was highly surprised with this Video/DVD it was very enjoyable, but not only that it was actually interesting. Lets have a look at the highs and lows of “Before They Were WWE Superstar 2”.

The first superstar on the Video/DVD was Brock Lesnar, Brock talked about various stuff like his home life and various other topics, however the most interesting was when he talked about his climb in the ranks of amateur wrestling. We see footage of young Brock competing in high schools and colleges in his rise in amateur wrestling, not bad stuff at all. Next up its Tazz, while his WWE career may have been a huge let down the man certainly has done a lot in the wrestling world. Tazz goes back to Brooklyn and shows us around his old school, he talks about his life in the school football team and then tells us how he became a wrestler, and with comments from Paul Heyman this section is very interesting.

Next up we take a look at the life of John Cena. Again interesting because I never thought Cena would be like this, I don’t know why, but I imagined Cena to be nothing but the serious guy, but surprisingly he is the total opposite. John’s family talks about him as a child, growing up being a bit of a “handful”. His friends talk about his college antics, which more often than not involve getting totally naked and walking around the hallways, or dressing up in goofy clothes and having a laugh. John talks about starting out as a pro-bodybuilder and then making the transition to pro-wrestling. Shawn Michaels is probably the most interesting profile on this instalment, Shawn talks about his childhood, his early days in wrestling, his experiences in AWA, then his dealing with Vince McMahon, his teaming up with Marty Jannetty and then finally receiving a second chance in the WWE. Shawn’s profile is the most entertaining and well worth a look.

Skipping a few superstars we take a look at Al Snow and his training to be a WWE superstar. Al talks about his training to be a WWE superstar. He talks about his “Avatar” gimmick and also his “Shanobi” gimmick. Al then talks about how Paul Heyman took him and transformed his character, which lead to the “Al Snow” character being born and of course which lead to the “head” character being born. This is good stuff, because Al Snow is such a good superstar it nice the WWE have done a piece on him, even if it’s not that long. Again we fast forward past a few profiles to Chris Jericho. Again Jericho talks about various things like the musical influence in his life, his sporting hobbies and how he broke into the wrestling business. Footage from Chris in a Canadian promotion in shown, along with Lance Storm. Chris talks about the highlights in his career, which include winning the Intercontinental Championship, meeting Ricky Steamboat for the first time and becoming the first WWE Undisputed Champion. And finally, its Rob Van Dam’s turn. RVD’s profile is again pretty interesting, with Rob’s parents talking about him being a sporty child, and then his school teacher talking about Rob pulling out various stunts at school, such as back flipping of the school roof and putting teachers in wrestling holds. RVD talks about breaking into the business training with the Sheik and getting his big break in ECW. Very good stuff.

So I have given you the highlights, now for my complaints, and trust me, I have a few. First of all, I find it hard to understand why the WWE has put such young superstars in this Video/DVD, stars such as Cena, Orton, Nowinski and Torrie. Although these guys have accomplished a great amount in there time in the business they haven’t really done a whole lot before they came to the WWE, so it means most of there profile is about there school and college life, which for me is not that entertaining. Surely the WWE would have been better putting superstars who have had more experience such as Lance Storm or maybe Chris Benoit, I’m sure these guys profiles would be much more interesting. Second complaint, for a lot of the WWE superstars on this Video/DVD they have competed in WCW and ECW, so why is it that there careers have seemed to be missed out from that point. I know WWE have the WCW video library so why haven’t they used it to the full advantage, and as for the ECW footage, I do understand that the legal proceedings are not over yet, but its such a shame the WWE couldn’t have used the footage. Anyway not to worry.

Overall I was pleased with this Video/DVD, for the most part it was very interesting and it was nice to learn about certain WWE superstars. I particularly enjoyed watching about Shawn Michaels, Tazz and Al Snow, and there was a few profiles I would have left out. It was disappointing that the WWE never used much WCW footage and never used any ECW footage. But nether-the-less this Video/DVD was enjoyable for the most part with just a few disappointments.

As you can see the DVD boasts an extensive range of extras that makes it well worth forking out the extra cash for. I particularly enjoyed watching Chris Jericho’s match with Alex Wright, as well as The Rocker’s vs. Iron Mike Sharpe & The Intruder. Whether you purchase the Video or the DVD I’m sure you will overall enjoy this WWE Video/DVD release, its well worth the money.