Wrestling Superstars Before They Were Famous Review

Presented by Jerry ‘THE KING’ Lawler, this commercial video looks at some of the biggest names in pro-wrestling, before they were famous, before they reached the highest point in their career. It features some of the biggest names such as Jeff Jarrett, Cactus Jack, The Undertaker, Lance Storm, Chris Jericho, Lita & many more. The video takes a look at some of the early days in wrestlers careers, in federations such as Jim Cornette’s Smokey Mountain Wrestling Federations & other North American federations. 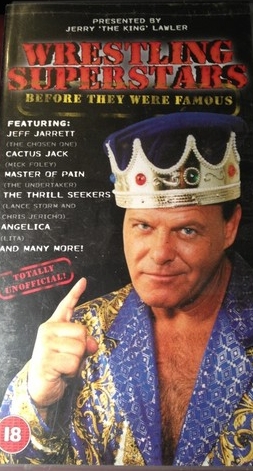 The video takes a look firstly at ‘The Undertaker’, or known in an early persona ‘Master of Pain’ Mean Mark Calloway. Looking back to 1989, it is interesting to see, The Undertaker, who was in Memphis at the time, fights Kerry Von Eric. The match which is shown, is nothing spectacular and is pretty poor and it only shows half way through, but it still is good to see ‘The Undertaker’ or ‘Mean Mark Calloway’ before he was in the WWF.

In the next match it shows us, Kane in a previous persona, he is fighting as Unabomb in a tag team match against the ‘Rock & Roll Express’, and Unabomb’s tag team partner is non other than Al Snow. Now this is a very poor match more visually than wrestling wise. The quality of the picture is extremely poor, and I found it hard to watch the match. The video then takes a step forward to 1999, when it looks at Matt Hardy who fights in singles action against Rick Michaels. Now, for the amount of match that was on this tape I actually enjoyed it, maybe because it was only a small does of Hardy, or equally it could have been that this match was good. Either way, this match did have some bad points, the commentary was terrible. The match was taken from a small fed called MCW, and it was ok, better than the next match.

The next match that would be on the tape would see Jeff Hardy or in this instant, ‘Willow the Wisp’ fight Shannon Moore. Jeff Hardy with full head attire on fought in a match, which was pretty poor. It was another match from the MCW promotion, and it again was interesting looking at the two wrestler both Shannon Moore and Jeff Hardy, but these two were still in there rookie stages of their career and it was evident in the quality of the match. Shannon Moore did actually have a good match, but Jeff Hardy didn’t.

The video then takes a look at the women of the world of wrestling, Lita, Sunny and Jackie. Sunny is involved in a Smokey Mountain match with Blue Meanie. Lita is involved in a match with the ‘Backstreet Boys’ Shannon Moore & Shane Helms. And Jackie is showed as Miss Texas, not much really to say about this part.

The next superstar who is looked at is Jeff Jarrett, in a match in Memphis Tennessee in 1988, he fights Keith Eric. The match was a traditional wrestling match. No high flying, No Hardcore wrestling and the match was very short. However the match was good, and it was interesting to see how Jeff Jarrett had not changed in his wrestling repertoire, he had just evolved into a better wrestler. The next is from 1994, and the Smokey Mountain Wrestling Federation, and this is un-doubtable the best match on the video. The ‘Thrill Seekers’ Chris Jericho & Lance Storm fight the ‘Heavenly Bodies, in what is a great entertaining match. This match does prove that Chris Jericho and Lance Strom are class act wrestlers. At this time of the match Jericho had a broken arm, or so it was said, however whether he had a broken arm or not, he performed in a class act as well as Lance Storm.

The next section of the video looks at some interviews of wrestlers. Not much in this section, some interviews from Lance Storm, Chris Jericho, Jeff Jarrett, Brain Christopher, and many more. There is a great interview in this section from Cactus Jack, as he speaks about the ‘Colorado Kid’. Then we see a Cactus Jack VS. ‘Colorado Kid’ in great match. It only shows half of the match but it still is pretty good, some good quality Mick Foley Wrestling.

Then Brain Christopher VS. ‘The Shadow’, is a pretty decent match, but again it is good to see how the wrestler has improved over the years, and Brain Christopher is no excuse, even he has improved now. Staying with the Lawler family, finally the video looks at Jerry ‘THE KING’ Lawler, and his days in wrestling before the WWF. In this case, he fights the ‘Master of Pain’ Mean Mark Calloway, in 1989. This is again a good match, its taken from Memphis, the home state of Jerry Lawler. The match is ok; we don’t get to see much of the match, mainly just the attack of Lawler at the end of the match. The video signs out with some of the mistakes during the making of this show.

This video was made in 2001, when an un-employed Jerry Lawler was free from the WWF. May no mistake, this is a low budget video and has no bearing of ECW, WWF or WCW, the video clips that are shown are from various independent federation around North America. Some are really poor quality, both wrestling wise, and visually. However, I enjoyed this video, and it was good as a wrestling fan, to look back at the days before the superstars became famous. It good to see how some of the wrestlers have improved over the years, and how some have not improved. If you’re a keen wrestling fan, then I advise you to get this video, if you’re just an occasional fan, then don’t waste your money.