What’s the best wrestling game ever? A lot of younger people would mention titles like Fire Pro, No Mercy or maybe a game from the Smackdown! series. But there would be a few who were convinced that the coin-op from Technos, WWF Wrestlefest is the greatest wrestling game of all time. I certainly remember playing it myself, not long after I got into wrestling, and being amazed that I could actually control Hulk Hogan, and hand out some beatings to the evil heels. But it’s been 12 years since Wrestlefest was released. Surely it’s not playable now? Well, that’s why I’m reviewing it. 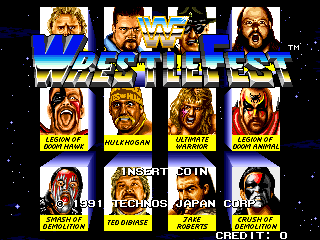 Arcade games have always boasted amazing graphics, and this title was no exception. The sprites were highly detailed, bright, and of a very high standard for that period of time. Every wrestler from DiBiase to Ultimate Warrior looks amazing, and there’s no chance that you won’t be able to tell who is who. One of the most impressive aspects of the graphics was the fact that you could have 6 players on the screen at once. Smackdown!2 from a few years ago could only show 4 wrestlers at a time! Add these facts to the ultra-cool visuals in the backstage interviews segment, and you’re looking at graphics that were outstanding in their time period. Even today there’s no problems with the look of the game, as you’re not going to have any problems seeing what’s going on, and they’re actually easier on the eye than current games like Fire Pro D. 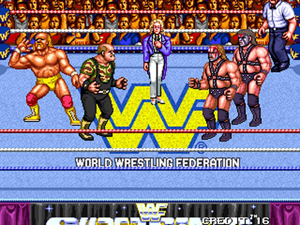 Correct me if I’m wrong, but I think that this was the first game ever to include audio match commentary. You’ve got an announcer in the background calling out the names of the moves, and calling the action as it happens. OK, all the other sound is rank, and there’s no real wrestler music, but all the sound for the match action sounds great, with superb sounding slams and bumps. Compared to today’s wrestling game music, it’s like having your ears spat in, but back in 1991 there were very few games that could match Wrestlefest in terms of the quality of the sound.

For years, nothing could touch Wrestlefest as far as gameplay goes. You’ve got your punch, kick and grapple buttons, with a huge variety of moves to pull off. When you’re facing your opponent, who has a decent amount of health, you can pull off four moves. That’s the same as Smackdown!4 for the PS2, released in November. And when your opponent has been beaten up a bit, more moves become available to you. It’s so fun and easy to play that it’s not surprising that you can still play Wrestlefest today and enjoy it an awful lot. 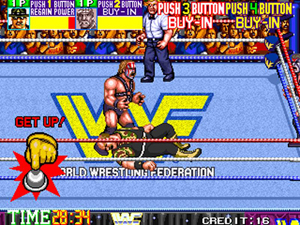 Let’s face it, most arcade games rarely feature more than one mode of play. And the few wrestling games that have been coin operated over the years have only really featured a career mode. That’s why it’s so surprising that Wrestlefest offers you TWO modes of play. You can either have a tag team career mode or take part in a Battle Royale. The tag mode is wonderful, as you pick two wrestlers, start them off at the bottom of the roster, beat quite a few tag teams (and you’ll even take part in a tag team match in a steel cage), then face the ultimate challenge…The Legion Of Doom. All throughout the career mode, Hawk and Animal will taunt you backstage, and act like cocky heel champions. It’s your job to beat them, get the gold and send the crowd home happy. But it’s extremely difficult to do so. This game defines the phrase “steep learning curve”, as your opponents get much harder as you go on. As for the Battle Royale, it’s basic WWF rules: if you go over the top rope or get pinned, you’re eliminated. This is bags of fun, and it’s a great challenge to try and win the thing. Wrestlefest also adds something new to the rules, as you can be eliminated if someone lies on top of you while you cover your opponent. If the ref gets to 3, you’re both out of the game. This makes things hectic, as you can sometimes have stacks of guys lying on top of each other, then at the count of 2 and a half, the guy on the bottom kicks out and everyone goes flying. It’s too hard to say which mode is the best, as each is good in their own right, and both should pass the time whether you’re in 1991 or 2003.

It’s not a huge roster compared to today’s standards, but all of the big names from that time period are in the game. Every wrestler has their own finishing move, taunt and individual move set, so it does matter who you choose. Unfortunately, the almost unbeatable Legion Of Doom are not selectable (unless you cheat using the ROM), but there should be enough superstars that are selectable in the game to suit your needs.

I’m basing this on how much the game makes you want to go back and play it. Just over a decade ago, you could never get enough of Wrestlefest. If, by some miracle, you managed to beat Legion Of Doom without spending all your money, then you would still want to play the Battle Royale mode. Then the next time you were near the game with money, you’d want to do it all over again. Today though, Wrestlefest won’t keep you busy for long. If you’re playing on your own machine (or ROM), then the urge to add more credits is just too much when Hawk keeps laughing at you, and the unlimited continues will mean that you’ll manage to win every match after a while. So once you’ve completed both modes with every character, you’re done with the game and won’t want to play it too much. But if you just see a version of the game in an out of date arcade, the old feelings of “just one more game” will come back to you in a heartbeat.

Overall (Not an average)

In 1991, Wrestlefest was wrestling perfection. It had everything you wanted from a wrestling game, and then some. In today’s marketplace, the game is certainly playable, and still a lot of fun, but more modern games are always going to be the more attractive alternative with their stacks of game modes and lush graphics. If Wrestlefest had made it to home consoles at it’s peak, it would have been remembered forever as an all time classic. However, those that played the game in the early 90’s will never forget the good times they had on the machine.