Some people love the Fire Pro series.  Some people hate all games that carry the Fire Pro name.  I for one love the games.  They even fit into my ideal fantasy in life: Lying on the beach, drinking a beer, snuggling up to Britney and playing Fire Pro.  But wait, I hear you cry!  “How will he get Fire Pro down onto the beach, Dreamcasts aren’t portable!”. If that is what you’re thinking, I thank you for not dismissing the possibility of Ms Spears and I in a relationship.  But you’re also wrong in one way.  Fire Pro is coming to Gameboy baby! 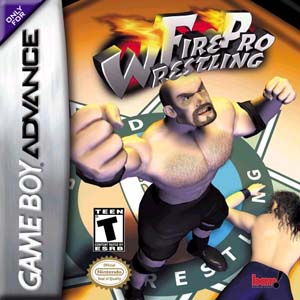 Let’s take a look at the history of the series.  Sound boring?  Tough. As terrifying as the scenario sounds, Fire Pro A never made it to the Gamecube’s little brother.  Human, the original Fire Pro developers were about to close down due to lack of capital.  However, Spike came along and took over Human, and the rights to all it’s games. So, from the bottom of my heart, thank you Spike!

(The following ratings are based on the GBA’s possibilities.   A game that scores 10/10 on the GBA may not look as good as an X Box game which scores 9/10)

As with all Fire Pro games, the in ring action is 2D.  The sprites may put some people off, but you can’t expect perfect 3D polygons on a Gameboy Advance.  If you take a closer look at the sprites, they’re really quite good.  Each wrestler is instantly recognisable (apart from those in the US, but we’ll get to that later).  The crowd might not look too special, and neither are the arenas, but this game doesn’t live off of it’s graphics.  All of the moves look pixel perfect, and you’ll be able to tell the difference between People’s Elbows and Hogan Leg Drops with ease.

Hmmm.  Some people might not agree with me, but like 99.99% of wrestling games, the sound isn’t great.  Crowd chants and bone crunching slamming noises are non existent. The closest things to a crowd reaction is the woman’s screams when a character is busted wide open, or when the crowd count along to a pinfall in a great match.  The generic music is dire, but it’s not feasible to expect accurate versions of Limp Bizkit’s “Rollin’” and Motorhead’s “The Game” in a GBA game.

I doubt many people will complain about how the game plays.  It’s almost a thing of beauty.  A grapple is initiated by walking up to the other wrestler.  The A and B buttons do minor damage moves, while pressing A and B at the same time will execute a stronger move.  A novel feature in the game is the ability to hit your finisher at any time.  However, if you go for a Stone Cold Stunner or Rock Bottom 30 seconds into a match, your character’s move will be reversed, leaving you prone to attacks.  This adds a new level of strategy to wrestling games- Should I carry on wearing him down or go for my finisher?  If you want to talk wrestling moves, there’s literally hundreds, perhaps thousands.  You name it, Fire Pro has it.  From your Tope Atomicos and Dragonrannas for your Juniors, to your Burning Hammers and Tiger Driver 91’s for your power guys, there’s a perfect mix of highflying, technical, brawling and power moves.  Fire Pro’s control system is easy enough for a beginner to use, but needs a lot of time to perfect. 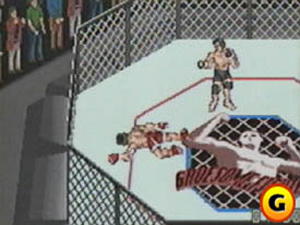 The quality of a wrestling games depends on it’s features.  Fire Pro doesn’t disappoint.  If you get fed up of the regular tag and single matches, and need something a little bit more extreme, then the deathmatch is for you.  An electric steel fence surrounds the ring where the wrestlers fight within, before the C4 explosion.  After the blast, you need to save your energy and finish off your opponent.  If you’re not into the FMW kind of matches, there’s always the Submission only matches, 4 way dances and Battles Royales.  Finally, if you get sick of wrestling, you can play in Gruesome mode- a mini Mixed Martial Arts game.  You’re given your choice of shootfighters, placed in an octagon and told “Let’s get it on!”.  This is a great feature, as you can go from a high flying Lucha match, to a suplexfest, then onto a shootfight.  Because of this, you just don’t seem to get bored while playing Fire Pro!  Fire Pro is far from perfect though.  6 man tag and regular cage matches would have been a nice touch, but you can’t have everything now, can you?

I can’t say I’m too keen on the Fire Pro Create A Wrestler feature.  It is better than some CAWs for games on consoles, and at least Fire Pro A includes this mode (Take note WWF Road To Wrestlemania). Because of the sprite models and a limited selection of heads, it’s hard to get your wrestlers looking exact. Plus, some of the colours just don’t fit in.  I’ll warn you know though, if you’re a fan of WWE, you’d better get used to the CAW mode.  Due to the fact Fire Pro isn’t an official WWE game, there’s no Rock or Hulk Hogans to be found.  However, if you look closely at the AWF you might find the similarities between The Salesman Rick Morici and The Great One himself.  And if Axe Duggan’s black tights were yellow, wouldn’t he look like Hogan? Yes he would.  All of your favourite WWE stars are in the game with fake names and different coloured clothes/hair.  5 minutes spent in the CAW/Edit mode will have Austin looking more like the Rattlesnake and less like The Bionic Man Steve Majors though.

The easiest category to rate for Fire Pro A.  The roster has something for each and every wrestling fan.  Like WWE?  How does Rock Vs Austin in a hardcore match sound?  If you’re a fan of Juniors, you can have CIMA Vs Sasuke while you’re in the car.  If you liked ECW, you can give Sabu a Five Star Frogsplash while you’re on the toilet.  And if you liked Legends Of Wrestling’s roster, wait until you see the matches you can have in Fire Pro.  Big Show Vs Andre The Giant, Dynamite Kid Vs Davey Boy Smith, Bret Hart Vs Ric Flair, Terry Funk Vs Cactus Jack…You get the picture.

Once you unlock all the hidden legends through Audience (Career) Mod, you might think that you’re done with Fire Pro.  There’s a lot to master in this game; Try winning a handicap match on Level 10. Try making some CAWs.  Try out some more dream match ups.  However, this isn’t for everyone though, and the game might become a bit boring after you’ve been through all the matches you could ever dream of.

Fire Pro isn’t for everyone.  But if you’ve played the Dreamcast/SNES versions at home and wished you could play it any time you want, you will simply love this game.  I’m my opinion, it’s the best wrestling game I’ve ever played. Better start saving up some money for Duracells though, nothing is worse than being 50 minutes into a classic technical match when the batteries cut off.