REVIEW: Was the world ready for the WEIRD AL movie?

It’s tough to create a truthful yet compelling cinematic-biographical take on a celebrity that’s still alive. You can be truthful but, usually, the reality is more boring than what can be conjured up by a Hollywood studio. You only need to look at the very stale and cookie-cutter “Steve Jobs” biopic (the Ashton Kutcher one, I mean) that plays like nothing more than the man’s Wikipedia page put to film. On the other hand, you can be compelling, but that usually comes at the expense of reality. Movies like Braveheart either changed or grossly exaggerated things to the point where “history” basically became fantasy. Of course, both of those movies featured a principal character that was already deceased. As I said, to make a biopic about a still-living person, that is both compelling and truthful, is basically the holy grail.

The nearly 40 years since the singer’s tragic death have allowed enough time to pass for a sincere, unadulterated, and truthful biography of the pop superstar’s life to come to the big screen. I don’t think a movie like this—a movie this brave—could have been made had the singer survived that fateful night at the Major Awards Show. His career at the time of the murder showed no signs of slowing down. Hits like Another One Rides the Bus, Like a Surgeon, and Eat It were still going strong, and Amish Paradise was the smashiest hit of all smash hits. Who knows what would have happened? Likely the cold war feud with Michael Jackson would have exploded to new levels of pettiness. Unfinished versions of songs like Fat were adapted by Jackson to widespread commercial acclaim (and critical finger-wagging at the tastelessness of his exploiting the death of his old rival).

If you ask me, Weird Al would have continued making hits to the present day. I know that’s almost a ludicrous idea, considering you can count on one hand (with fingers left over) the number of superstars from the 80s that are still selling out concerts and releasing number 1 albums thirty+ years later. We’ll never know, but I choose to believe he had something special that would have lived on. One thing’s for sure, the brief living career he did have, from 1976-1985, was enough (and full of enough incredible moments) to cement his legendary status.

“WEIRD” is the first biography ever attempted of Yankovic’s life and it does a masterful job capturing many of those incredible moments. The film comes to us from director Eric Appel (famous mostly for directing TV sitcoms such as The Office, New Girl, and Brooklyn Nine-Nine). The film is co-written by Appel along with, get this, a guy named Al Yankovic. That’s going to be one of my favorite trivia answers in a few years. You might think it’s weird, no pun intended, but did you know that Weird Al, as a kid, used to listen to and admire a famous accordion player named Frankie Yankovic, who had no relation at all to Weird Al? It’s only fitting, if not a perfect example of fate, that another Yankovic would find his way to Hollywood and be tasked with writing a biopic of the most famous of all the men to wear that name.

And what about the film? 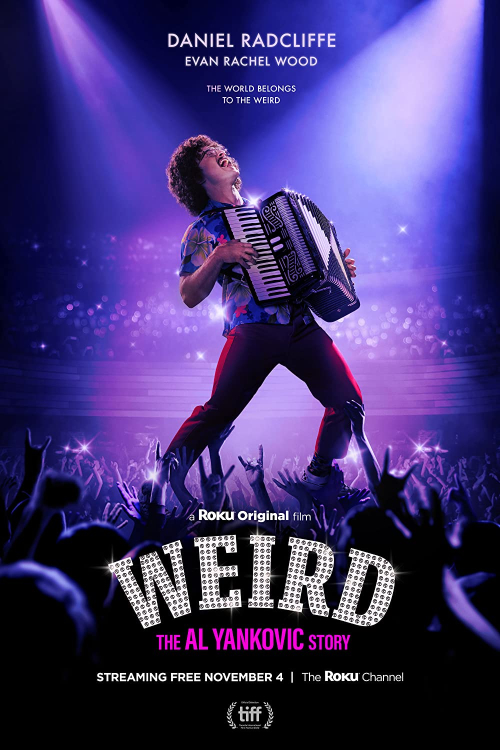 It begins with Weird Al as a child, struggling against the hardships of a stuffy, joyless father that refuses to allow his son to indulge his funnier side. Young Al has to hide the accordion his mother bought for him from a door-to-door salesman until he is old enough to join a band and go out on his own. Fame comes almost instantly due to his first big hit, My Bologna. Despite that, he struggles to secure a record deal: Scotti Brothers Record Execs—played by no-name actors I didn’t even bother to look up—famously turn him down, citing a lack of marketplace for parody albums. Everything comes to a head, however, when he records his first original song: Eat It.

Kids today know the Michael Jackson parody version—Beat It—but WEIRD doesn’t shy away from setting the record straight. It was Weird Al that conceived the hit music. It was Weird Al that brought the hit lyrics to life. Jackson’s strange cautionary tale about gang violence and vengeance-seeking looks positively quaint in comparison to the poetry Yankovic penned. His ability to craft original hits landed him his record deal and the mega millions that followed. It also, sadly, attracted the attention of the woman that would cut his life short: Madonna.

Desperate for him to parody one of her hits—specifically “Like a Virgin” the struggling 80s pop singer began a relationship with Weird Al, leading the singer down a spiral of alcohol and violent outbursts that basically define the man whenever he’s talked about today. I’m glad the movie doesn’t shy away from this dark period, if only because it rightly points a finger at the real villainess at the heart of it all.

The circumstances of Madonna’s kidnapping by Drug Cartel mastermind Pablo Escobar, Al’s murder of the kingpin, and Madonna’s subsequent ascension to the top of the illegal drug empire are covered throughout the third act of the picture in all the gory details that children of the era remember following all too well. I won’t say the movie doesn’t occasionally indulge in the tropes of its genre; this is still a musical biopic after all, so it’s at least fitting that it ends with a rousing concert performance of Amish Paradise, before the finale brings things to a bitter conclusion: The infamous assassin Sicario guns him down right after he gives his acceptance speech for winning the Major Award. 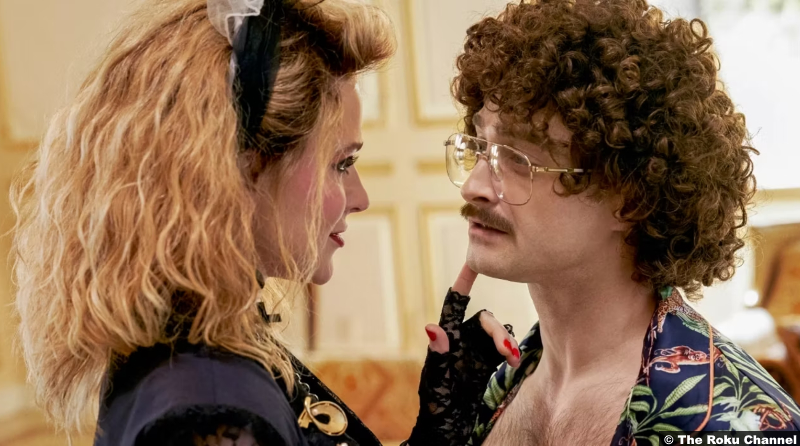 There’s a coda afterward, though it’s the only part of the movie that’s purely fictitious, depicting a zombified hand of the deceased superstar rising from the grave, seeking vengeance on Madonna for ending his life. It’s a nice thought but, alas, wholly untrue.

What is true is the quality of the film. WEIRD captures the essence of the remarkable singer/songwriter better than any other music biopic has ever done to its source material. Fans of his, as well as lovers of history, would be fools not to seek the movie out. I cannot recommend it enough.

11/10 – WEIRD will forever be remembered as the greatest thing humanity has ever produced. 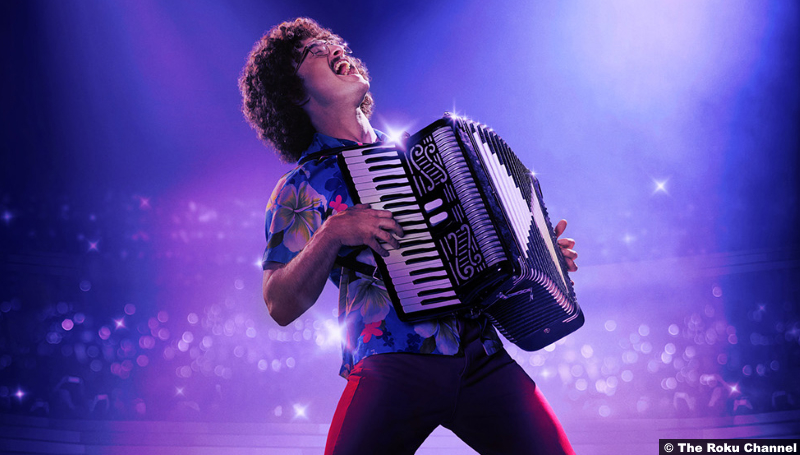