House of the Dragon S01E04: King of the Narrow Sea – Here’s one for your GOT Bingo card…

Well, I was wondering when we’d get to the incest.

Ok, full transparency here.  I’m going to have to stop reviewing this show.  I don’t know quite why, but I am finding this show incredibly frustrating, so much so that I really just don’t want to watch it anymore.  Now, I’ve read a lot of reviews of this episode, and a lot of people like it, and like where the show is going generally, but I just disagree.

Here’s my problem.  Each of these episodes starts with a time jump that erases, glosses over, or just yadda yaddas a lot of the plot points of the prior episode.  It’s impossible for me to get interested in any of these characters or what they’re up to if I know that the show is just going to press the fast-forward button on anything interesting that happens.

Still, let’s do one more review, shall we?

I’m not going to do my usual thing of going through the episode beat by beat, because there’s no bloody point – see above.

This episode appears to take place what, a year? after the last one?  I guess? Daemon has successfully conquered and routed the Triarchy, has been named King of the Narrow Sea and wears a crown. 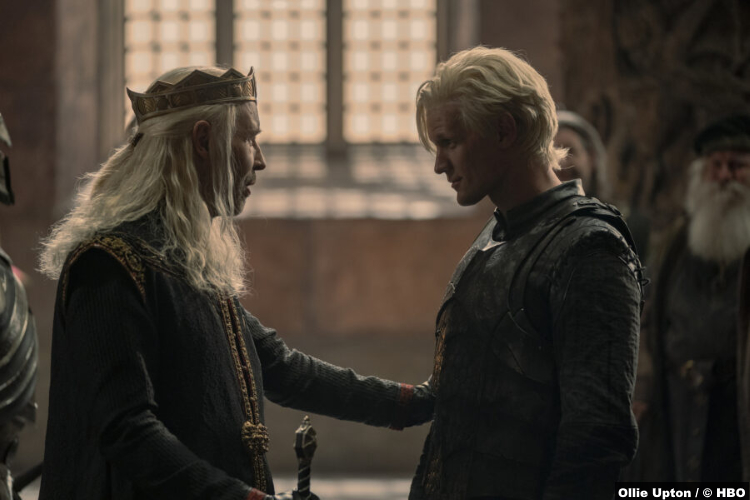 All things I would have been interested to watch, but no.  We come in, as we always do, after the action.

So Daemon comes back to Kings Landing and plays a pretty decent game of bending the knee to King Viserys, repenting, and trying to be the dutiful subject.  But of course, he’s got machinations.

Rhaenyra’s whole thing is that she’s trying to find a man to wed, and sure, the beginning scene with all the men begging to marry her is entertaining enough.  She gets in a good quip at a man as old as her father, and then she’s courted by a kid whose voice has barely broken – though as it turns out the kid is damn good with a sword.  It’s a good scene, but like everything else in this show, it isn’t developed, and it ends abruptly with Rhaenyra just leaving while the young teen runs a guy through with his sword for reasons. 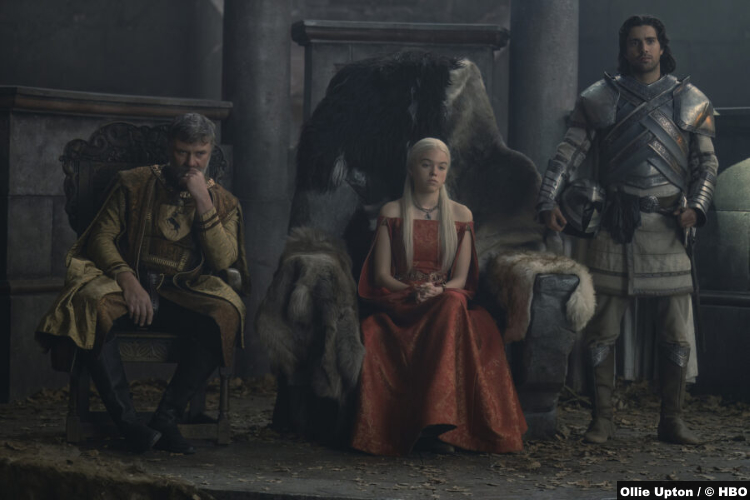 Here’s one thing I don’t get.  The last time I remember Rhaenyra and Daemon interacting, it was Rhaenyra striding up to Daemon at Dragonstone and daring him to kill her and take the heirship.  It wasn’t a nice scene.  And since then there’s been absolutely no development of their relationship at all, whatsoever.  So it’s particularly jarring to me that Rhaenyra greets Daemon as kind of an old chum…and then much more than that.  This is the real problem with all the fast forwarding.  How did the two of them reconcile?  We don’t know, because the show skipped that. 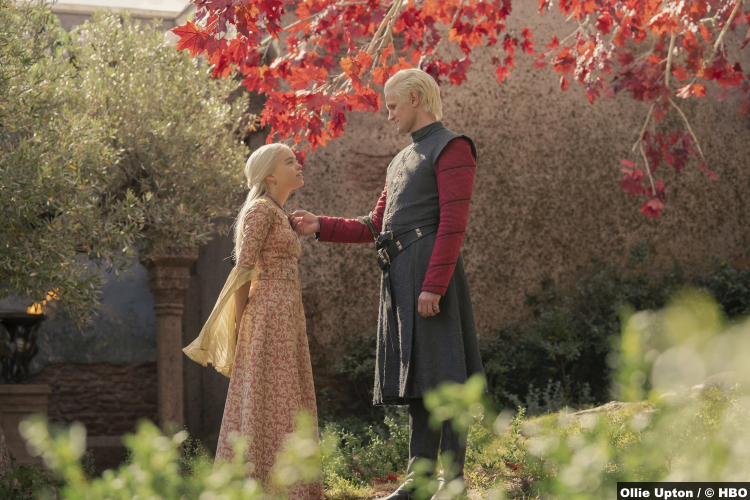 So here we are then, with the Princess excitedly plunging through the secret door of her chambers and meeting Daemon for a night of fun.  I don’t get it.

But of course, it wouldn’t be GOT without incest, so here’s some of that.  Why not?  Ok, I get that this is all Daemon’s plot to make King Viserys seem weak because somehow Daemon getting it on with his niece does just that.  The plot just doesn’t make any sense though.  If Daemon knew anything about Viserys, he’d know this scheme of his to convince Viserys to marry Rhaenyra to Daemon wouldn’t work.  And it doesn’t work.  It spectacularly doesn’t work, and once again, after welcoming Daemon home with wine and song, Viserys beats the crap out of him and exiles him for good.  All within the span of 30 minutes of the show. 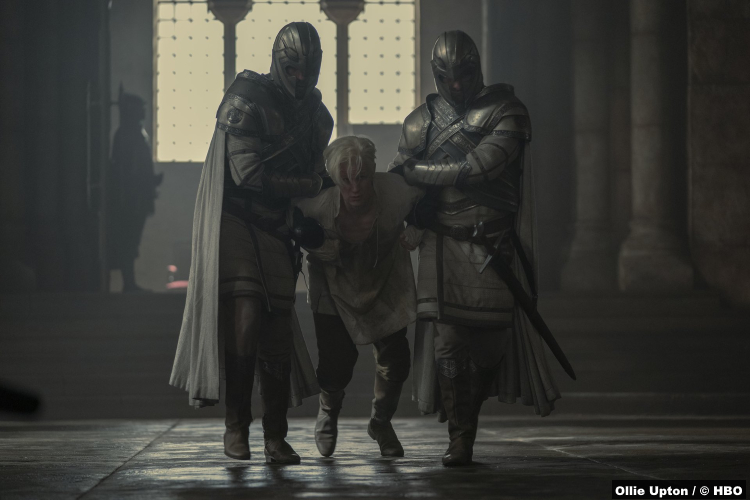 Meanwhile, Rhaenyra, still horny after her aborted and very weird attempted tryst with her uncle, seduces Ser Criston Cole.  To his credit, Cole is hesitant to break his vow of chastity, which he must have taken as a member of the Kingsguard, but he breaks it all the same, and the two of them have a very nice night together.  Honestly, their sex scene is pretty well-shot.  Apparently, the show had an intimacy coordinator to make sure everything was above board, and I think that’s great.  And the juxtaposition of their extremely passionate lovemaking with the queen staring blankly up at the ceiling while Viserys rutted away at her – that was also pretty well done.  That’s one thing this show is good at – juxtaposing moods, feelings, and ideas with contrasting scenes. 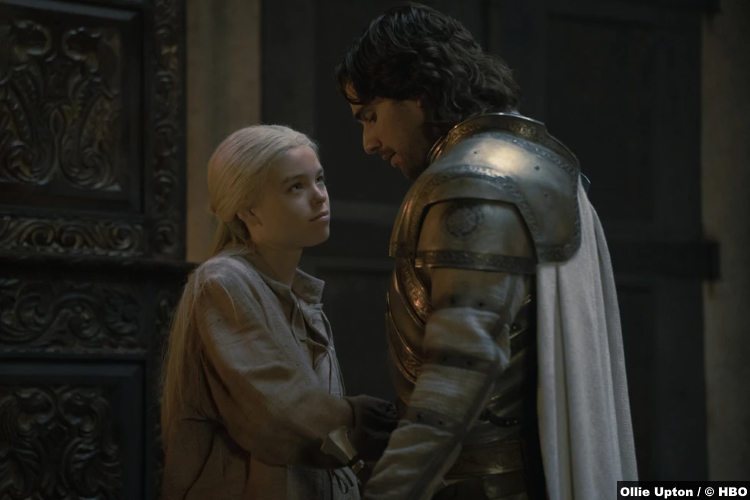 In the end, Viserys finds out about his daughter’s dalliance with her uncle, and he is none too pleased.  Yadda yadda (see, I can yadda yadda too), she’s to marry the Sea Snake’s son, and that’ll save the realm, I guess.  Another mention of the “Song of Ice and Fire,” referencing the events of GOT if they’d been written better, and that’s the ballgame for this episode.

7/10.  In a vacuum, this episode is not bad, and it has some good plot beats.  That’s really the thing that gets me more than anything else about this show – each episode is pretty darn good, but they just don’t connect to each other in a way that makes me want to care about anything that happens or any of the characters. 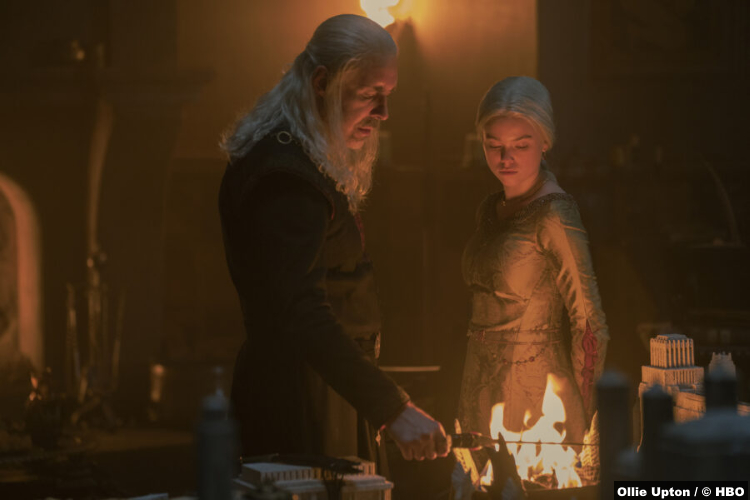