REVIEW: ELVIS beautifully mythologizes the King of Rock and Roll

Me, five minutes before showtime:

Me, ten minutes into the movie:

I might be the least objective person in the world to review this movie. I know my weaknesses, among them is my tremendously low tolerance for biographies that play fast and loose with the timeline of the subject matter. I also hate when movies try to pander to their audiences. And yet this movie, which commits both sins, astounds me.

Elvis stories, be they TV specials or otherwise—of which there have been many—are notoriously hard for me to enjoy, in that most of them take too many liberties, focus on all the wrong things, and feature a man in the middle who is either doing a bad parody of the most famous entertainer in history or is deliberately not trying to mimic him and thus comes off as a random guy in funny clothes.

Elvis is Mt. Fuji. He is ubiquitous the way Fuji is in Japanese art, inescapable, to the point where if Elvis is mentioned in popular culture and not satirized in some way, it makes him all the more visible, existing as a silhouette, cut out from the body of work around him, obvious by the space around him. His life story is so trend-setting it is almost cliched. In fact, many of the cliches we associate with musical biopics came from his life story. His life—a genuine rags to riches tale, a nobody kid becoming the ultimate somebody—is the epitome of the American dream, and has enough fascinating twists and turns to mine not only for a movie but for an entire series.

There have been many attempts to tell Elvis’ story and all of them have disappointed me for one reason or another. To date, the finest story of his life I’ve ever experienced was in book form, via Peter Guralnick’s two-volume biography “Last Train to Memphis: The Rise of Elvis Presley” and “Careless Love: The Unmaking of Elvis Presley.” No TV miniseries or Hollywood production has been able to capture the nuance of the man’s life, the tragedy associated with fame, the abuses against him by those around him, the loneliness he experienced for his entire adult existence, and the odd—almost self-contradictory—way he lived his life, straddled between sex-addicted adult and mother-dependant man-child.

My love of Elvis goes beyond my love of his music, his movies, or the many myths around him. My love is bred into me. It belonged to my mother before me and her mother before her. To this day I cannot enjoy Elvis (I listen to his albums regularly and re-watch the 68 Comeback special every year on my birthday), without thinking, at least for a moment, about either my mother or hers. I am not objective here. I am predisposed to be overly critical of Hollywood’s attempts to summarize his life in neat cinematic experiences.

But this? This movie? Elvis: The Movie?

This is a near-masterpiece. 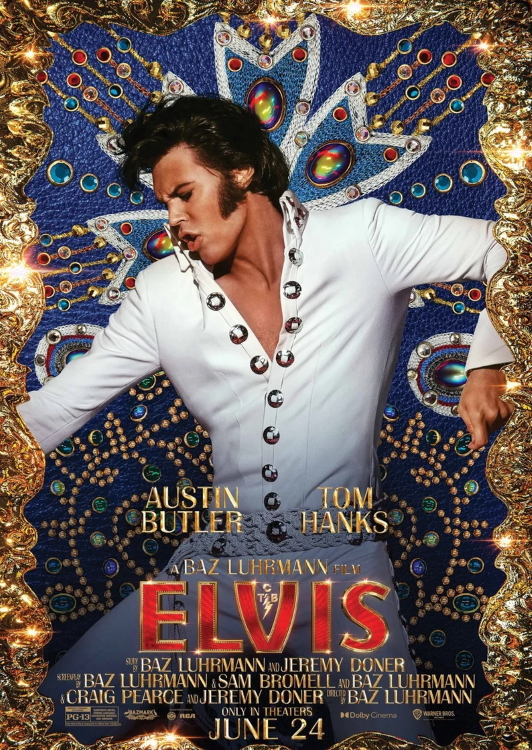 Baz Luhrmann, recently of The Great Gatsby, as well as Moulin Rouge, has crafted something far different from any ordinary biopic. He has made a bold, audacious, stylistically edited, stunningly shot movie that does not so much retell the story of Presley, as though he was a man who died nearly fifty years ago. No no no, Luhrmann tells this story as though Elvis was King Arthur, or Hercules, or some other ancient legendary hero, whose tale has been told so many times over the centuries that the original telling is long gone, leaving only the exaggerated mythology behind, the tale that grew in the telling.

There it was, so obvious now in hindsight: The secret to making a great Elvis movie. You can’t tell the story straight. You can’t present the facts like a documentary; they’re either too incredible to be believed or they’re too cliched nowadays to be interesting. Elvis, only 45 years after his death, already feels like a man who did not really exist. That’s nothing new: After his legendary Madison Square Garden concert in 1972, the New York Times reporter covering the event described him as a “prince from another planet.” He’s always felt larger than life. He’s always seemed surreal. So why on earth would you try to ground him? Why would you try to tell his life story in a paint-by-numbers, ho-hum way. 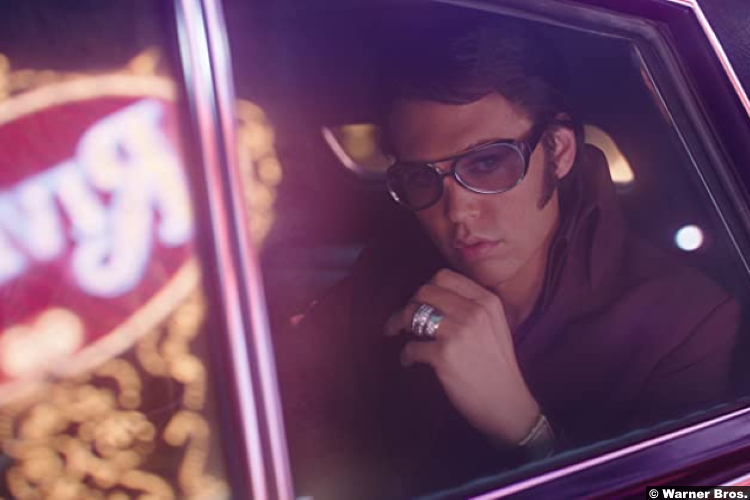 This movie goes all the way with that idea. It shows the origin story of women screaming at a singer, for crying out loud. Luhrmann films the moment like an involuntary convulsion, the way your knee jerks forward when it’s tapped in just the right spot near your kneecap. The world was waiting for just the right man to come along, and shake his hips in just the right way, for an involuntary reflex to kick in and for people to shriek. Of course, that’s ridiculous, and not at all what happened in the mid-50s, but the movie portrays that moment with the same sincerity— despite the fantasticalness—of Arthur pulling a sword from the stone to become King. It may not have happened that way, but that’s the legend of it. That’s the story. That’s the tale that has grown in the telling. 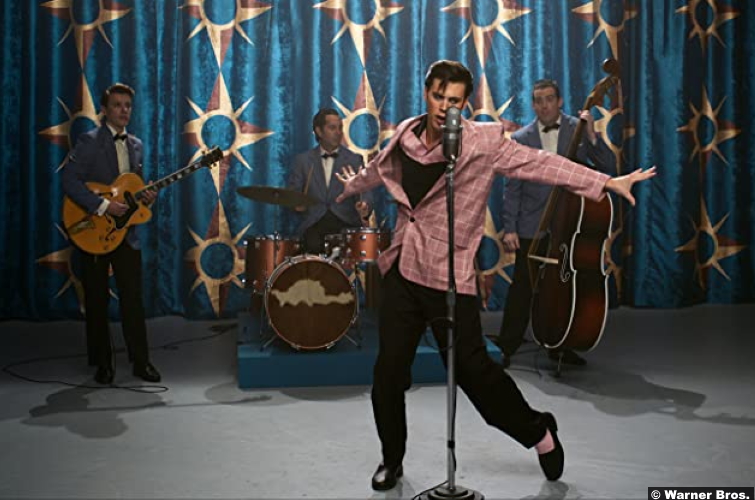 The film itself is told through the eyes of Elvis’ infamous manager, Colonel Tom Parker. Rarely have I sat down to watch a movie that I knew much about and not had a dozen “if I were making this movie I would______” ideas swimming through my brain. With Elvis, I was most hoping to see the movie frame its story with Parker not only as the villain but as the narrator, trying to con the audience into believing he was the true hero of the story. Lo and behold that is exactly the angle the film took. The result is a movie that keeps Elvis front and center as much as it keeps Parker lurking in the shadows. Whenever Presley would hit a high and look poised to grow so big not even the Colonel could corral him, the shadowy villain would come up with a new idea to reel him back, to dim his star just enough to keep control. Is it true that Parker arranged for Elvis to be drafted to regain some control over his rebellious image? No. That’s purely apocryphal. Is it true that Elvis fired him on stage only to come crawling back after essentially being blackmailed? No. But that’s the legend. That’s the tale that has grown in the telling. 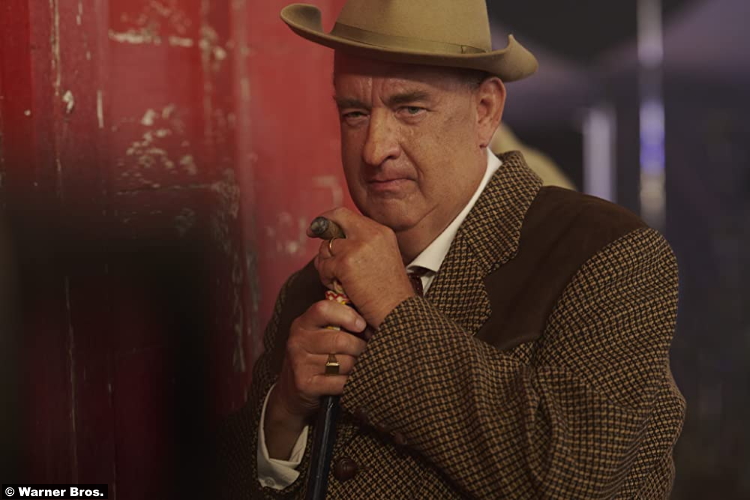 The songs are all out of order, chronologically. Elvis never looks bloated in the mid-60s or bloated during the 72 concert tour or flat-out fat from 74-76. He looks lean and fit for 99% of the film. That’s not at all accurate. There is nothing made of his 1960 return show with Sinatra or their private feud. There is barely a hint of the momentous Hawaii concert. The meeting with the Beatles is never depicted. The tell-all book from ex-entourage members that was released just before his death is totally ignored. On and on the list could go. The movie eschews the trappings (and traps) of the musical biopic. There’s no scene of Elvis walking into Sun Studio to, at first, unimpress and then blow away Sam Phillips. The elements are there, chopped up and presented in fragments here and there, but the big moment itself is bypassed. Basically everything that Dewey Cox did, Elvis avoids. In its place is a movie that, while occasionally messy, is impossible to ignore, is a feast for the eyes and ears, is equal parts triumph and tragedy, and is genuinely tear-inducing in its ending.

10/10 – ELVIS is one of the finest musical biopics ever made, precisely because it refuses to be a traditional biopic. It’s also the best depiction of Elvis on screen since the one-two punch of “That’s the Way it Is” and “Elvis on Tour.”